Hillary Clinton is once again going after the pharmaceutical companies in the form of drug pricing attacks. Her latest attack was on Mylan and its aggressive 400 percent price increase over the past decade for its EpiPen drug which uses an auto-injection of epinephrine to treat severe allergic reactions. Mylan acquired the product in 2007, and the price increased from $100 in 2008 to its current cost of ~$600. Hillary Clinton was quoted as stating:

"That's outrageous — and it's just the latest troubling example of a company taking advantage of its consumers," and "It's wrong when drug companies put profits ahead of patients, raising prices without justifying the value behind them."

Even more, after her initial Tweet the iShares Nasdaq Biotechnology ETF (PACF:IBB) sold off ~5% within minutes and moved from $299 to $279 per share by the next day or 6.7% over a two day period (Figures 1 and 2).

Former Vermont governor Howard Dean also came out swinging against the pharmaceutical and health-care industry stating that reform is needed which necessitates "far more sweeping" than what Dodd-Frank did for the financial industry. He further went on to state:

"This is predatory behavior by a particular drug company, and there's really not an excuse for it. I don't see the other pharmaceutical companies doing this kind of predatory behavior and these kinds of outrageous price increases". These kinds of political attacks have plagued the biotech sector for the better part of a year now and will likely continue to do so until there’s clarity in terms of the presidential cycle is completed.

Are These Political Attacks Warranted?

Mylan CEO Heather Bresch countered the widespread criticism her company received over the successive price increases Mylan implemented for its EpiPen. She pointed the finger at the supply chain and its complexities. Case in point, Mylan took a 31-percent price increase on EpiPen in 2015, while selling 7 percent more pens that year however Mylan's net revenue on the EpiPen actually fell 1 percent during that year. Generally speaking, drugs are funneled through several different possible routes and middlemen prior to reaching the end user. Along the way, each middleman receives a portion of the money charged for the drug throughout the supply chain. Bresch stated that it's not Mylan's pricing policy that's corrupt, but the drug-distribution system. Mylan is incentivized to increase the list price of its medicine, so Mylan can then rebate money to middlemen throughout the drug-supply chain.

It’s a misconception that drug companies are pocketing the “list” price money. The Pharmacy-Benefit Manger (PBM) and drug distribution companies have the power to negotiate lower prices as a result of their scale and user base (Figure 3). Thus only a fraction of the list price money is returned to the drug maker and in Mylan’s case, they only net 45% of the lost price (Figure 4). Mylan broke out the economics of the EpiPen supply chain. Out of the $608 list price, it said it nets only $274 per EpiPen 2-Pak, after rebates to PBMs and cuts taken by distributors and pharmacies. Most middlemen are paid via fees and rebates throughout the drug supply chain. Some of these rebates eventually flow to consumers in the form of lower premiums. 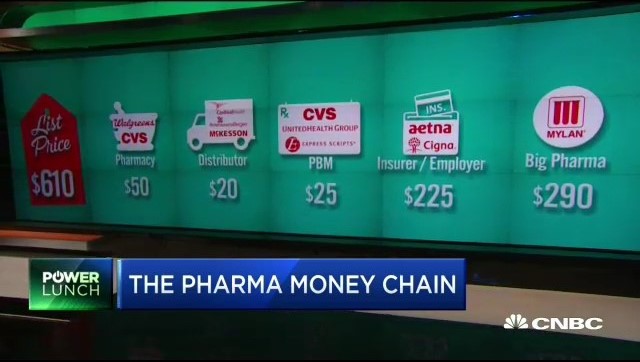 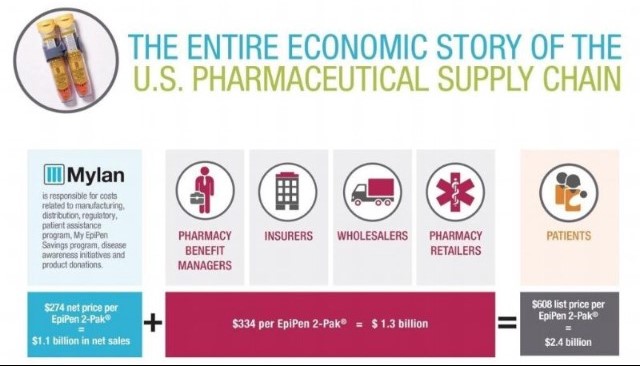 The Terse Breakdown Of The Drug Supply Chain

Drug makers sell drugs to pharmacies via drug wholesalers (i.e. McKesson). When a pharmacy sells a prescription, the PBM reimburses the pharmacy. The PBM has a contract with the patient's health plan to cover portions of the cost for various medicines. Drug makers will then return some of the money they're paid to the PBM, in the form of a rebate. The PBM shares some of those rebates with the health plan, reducing its drug costs. Drug makers often times pay rebates to get favorable placement on formularies, and thus access for their medicines. To enable a rebate-conducive environment for larger rebates, drug companies are increasing the “list” price on their drugs.

The political attacks are unwarranted in my opinion based on that drug supply chain dynamics and thus the net capture of the “list” price. In terms of the overall cost to the healthcare system, drugs comprise less than 10% of the cost structure. As candidates threaten drug companies with containing the costs of drugs via price increase caps or profit caps or a variety of other creative mechanisms, these actions negatively impact healthcare and biotech stocks in particular. Going after the 10% of the pie mathematically doesn’t make much sense to me. Even if the government was to cut drug prices by 10%, this would render a mere 1% decrease in the overall cost of healthcare. I think the 90% of the pie should be the focus here as there’s much more opportunity to streamline and implement efficiencies across the board to save the system money. As the political cycle comes to an end, many of these headwinds will be removed and allow the cohort to move higher. I’d be a buyer of IBB into any significant weakness due to extraneous political events.

2 thoughts on “The Political Biotech Charade”