President-elect Donald Trump’s inauguration won’t take place for two more months and yet his proposed economic plan is already sending ripples through markets. Treasury notes and bonds are tanking, stocks are rallying and the Dollar Index has surged to highs not seen in more than 10 years. All of which is in utter contrast to what analysts had expected to occur post-Trump’s election, and which seemingly presents a paradox of sorts. Trump’s two economic focal points are aggressive tax cuts and massive infrastructure investment. Both are expected, according to The Office of Management and Budget, to push the US debt burden by roughly 25% of GDP by 2020. And yet, in conjunction with those expectations, the Dollar is gaining.

Naturally, the most obvious reason would be that higher deficits will lead to inflation and, consequently, would force the Federal Reserve to raise interest rates. But that is a consequence rather than a reason. The real reason is that both the US economy and the US banking system have been ripe for higher rates for a while, and Trump’s plans for the economy, or “Trumponomics” as we like to call it, is merely a catalyst for an already strong economy.

Trumponomics is, of course, a play on words derived from the name Trump and economics. However, it’s also an attempt to link Trump’s plan to another US President, namely Ronald Reagan and his Reaganomics. Under President Regan, the US government had cut the federal corporate tax rate by 12%, from 46% to 34%, and propelled the US economy to its longest growth cycle since the end of the second World War.

Trump and his Trumponomics plan offer an even greater change to the corporate tax, suggesting a cut from today’s 35% rate to 15% and it includes tax incentives for corporates to repatriate their funds from tax shelters.

Other dimensions of Trump’s plan include renegotiation of existing US trade agreements, specifically the controversial Trans-Pacific Partnership Agreement. Overall, Trump wants to bring a more protectionist trade policy to America. Finally, he intends to curb immigration to the US, both by laws and by walls.

Yet, from those, the two ideas that seem most likely to materialize is tax cuts (even though such a deep cut to corporate tax seems a bit far-fetched) and infrastructure investment, which is certainly likely and very much needed. That’s not to say that Trump’s other plans could not materialize but those are more controversial and face myriad legal challenges. Trump could face an uphill battle on the execution of those plans. Hence, our focus on the immediate time frame is tax cuts, infrastructure plans and the risk of higher deficits.

So, now the inevitable question is where do we go from here? What can we expect from the Fed, the US bond market and the Dollar?

When we examine the iShares US Treasury Bond (PACF:GOVT), which holds a wide range of US notes and bonds from various maturities, we can see the upward trend in bonds is now likely to be over but, still, there needs to be another “leg up.” Another attempted to break higher for bonds is needed before a bearish cycle for bonds could be established and, of course, the Dollar pushed towards new highs. How exactly will that play out? The answer might lay with the Fed.

Where is the Fed? The CBOE rate probability tool, which is driven by rate derivatives, which puts the chance for a December rate hike to 0.75% is currently more than 90%. Nevertheless, the real variable is 2017. The CBOE tool, suggest the next rate hike will still come a year from now. This is also reflected when we compare the US Treasury yield curve of today vs. November 7th, the day before the election. Rates on the yield curve are higher, but the steepness hasn’t changed. 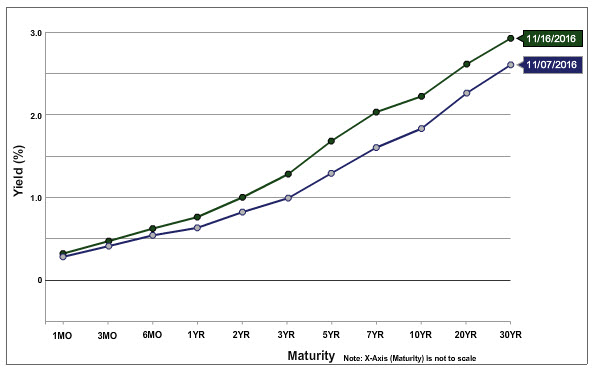 If we move on to connect the dots, the market is almost certain that a rate hike is coming this December, and that is likely already priced in for the Dollar. But once the Fed raises rates the big question will be when is the one? That is likely to lead to an end of the Dollar rally for the very near term and could bring some profit taking in the Dollar and a rebound for bonds. Put another way, here is our “leg up.”

But once Trumponomics seems closer to materializing, even if only partially fulfilled (and that process could happen as soon as March), then we can finally see the bullish trend in bonds reversing, yields going even higher and, of course, the Dollar resuming its bullish trend.

6 thoughts on “Trumponomics, Bonds And The Dollar”