In the past two weeks, crude oil futures took a beating; WTI futures ended last week at $46.47 per barrel while futures for Brent crude, the global benchmark, closed at $49.47 per barrel. Both WTI and Brent contracts have now concluded a 15% and 16% fall from their respective peak prices, closing at their lowest point since the deal between OPEC oil producers and 13 non-OPEC oil producers was signed. And the outlook for oil is not encouraging as a broader analysis of both the fundamentals and technical at play reveal a worrisome pattern—a pattern of an oversupplied oil market, ready to nose dive, as it did in 2014.

At the heart of the matter, as in 2014, is the US shale oil industry. Only this time around the US shale industry is significantly more competitive. According to Ron Ness, president of the North Dakota Petroleum Council quoted by Reuters, “the cost of extracting oil at Dunn County, North Dakota, is as low as in Iran” and “the cost of producing a barrel of oil is at $15 and falling" That figure is truly nothing short of dramatic! True, the production cost at Eagle Ford and Permian Delaware facilities is higher than Dunn country. And yet this figure underpins a very important change. In the next oil slump, shale producers won't be under the same pressure to cut production. Meanwhile, oil production in America has risen to 9.29 million barrels a day and is expected to surge to 10 million barrels a day by 2018. All the while, crude oil inventories are stubbornly high. The latest data from the EIA shows crude oil inventories were at 527.8 million barrels, at the higher end of the 5-year range. In fact, as the EIA chart below shows, US crude oil inventories have been persistently above the 5-year range for some time, suggesting demand for crude in the United States is too weak to accommodate the rising supply from shale oil. 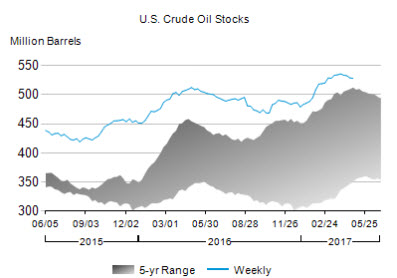 Meanwhile, In The Middle East

As US shale producers become leaner and with upscaling production, tensions in the Middle East refuse to abate. The region, home to OPEC’s major producers such as Saudi Arabia, Iraq and Iran, is in turmoil. Shiite Muslims and Sunni Muslim are engaged in a bloody religious war over dominance in the region. This has led Saudi Arabia, primarily Sunni Muslim, to rage a proxy war in Syria, the region’s hot spot, with predominantly Shiite Iran. And, as if this were not enough, Russia, the world’s largest oil producer and a critical party in the OPEC agreement, has jumped into this hot spot, actively fighting with its regional ally Iran.

Back in 2016, the parties involved had only just reached an agreement to curb oil production and, in fact, were only able to reach an agreement after an utter meltdown in oil prices. But, with US production at 9.29 million barrels a day and rising, more production cuts are required to keep oil price from re-testing its lows.

As can be seen in the EIA chart below, global demand for oil is slightly higher than supplies in the periods when global inventories were falling. However, US production is set to rise further and, according to the EIA, demand is expected to stagnate. Keep in mind oil inventories are poised to rise, not just in the US, but also the rest of the world. And only another oil crash, perhaps even a re-test of the 2016 low, will bring the oil producing enemies to negotiate further cuts. And as for the technical? The double top in the WTI futures chart below is another strong indicator of the oil rally ending, and an oil correction, perhaps even a price meltdown all the way to $26, is in the making. 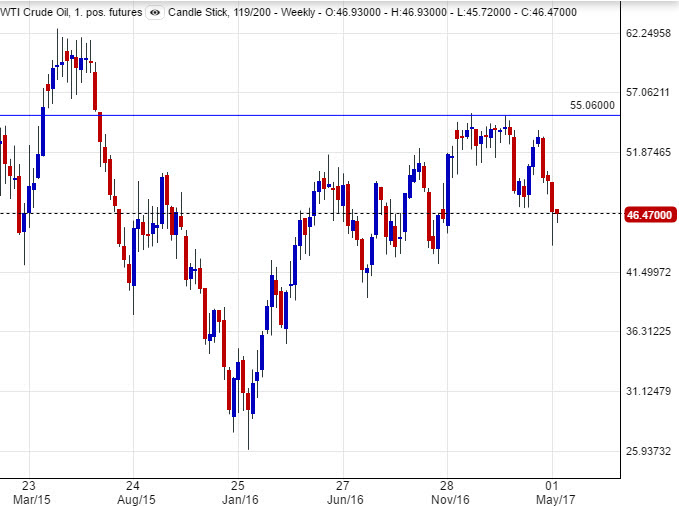