Final FY2017 numbers have been reported for Visa Inc. (NYSE:V) and FY2018 is now underway. I previously wrote an article proposing my thesis that growth will slow (not stop) starting with Q1 FY2018 numbers and now that FY2017 is in the books, I’ll be taking a clinical approach into this thesis as we approach Q1 FY18 numbers. As expected, Visa just recently reported another great quarter for Q4 FY2017 with beats on both the top and bottom line to round out the fiscal year. EPS and revenue estimates were beaten by $0.05 and $230 million, respectively. Visa had set new to all-time highs of ~$110 per share leading into the earnings report. Despite these beats on both the top and bottom line numbers, the stock responded in a relatively muted fashion. Investors have been accustomed to year-over-year quarterly growth in the double digits over the past year, specifically post Visa Europe acquisition and integration. For year-over-year revenue comparators post-Visa Europe integration, FYQ4 2016 growth was 19% followed by FY2017 revenue growth with FYQ1 at 25%, FYQ2 was 23%, FYQ3 was 26%, and FYQ4 was 14%.

FYQ4 2017 is a far departure from the previous four quarters of growth. Visa’s management is now forecasting revenue growth in the high single digits with EPS growth in the mid-teens, artificially high due to share buybacks. This forward-looking revenue growth rate is a shape divergence from the past year-plus revenue growth numbers investors were enjoying yet appears to be the new normal moving forward. As I posited previously, Visa’s growth rate will be slowing, now confirmed by Visa’s management and is thus misaligned with the stock’s 41% YTD appreciation, P/E ratio, PEG ratio and overall growth prospects.

Visa’s management has been utilizing the same statement about revenue growth each of the last five quarters post-Visa Europe acquisition. However, with the most recent quarter, there’s a caveat, management has now stated that growth will slow to the high single digits moving forward.

Per Visa’s FYQ4 2016 earnings report:
“Net operating revenue in the fiscal fourth quarter 2016 was $4.3 billion, an increase of 19%, driven by the inclusion of Europe and continued growth in payments volume and processed transactions.”

Visa’s FYQ1 2017 earnings report:
“Net operating revenue in the fiscal first quarter of 2017 was $4.5 billion, an increase of 25%, driven by the inclusion of Europe and continued growth in processed transactions and nominal payments volume.”

Visa’s FYQ2 2017 earnings report:
“Net operating revenue of $4.5 billion, an increase of 23%, driven by the inclusion of Europe and continued growth in payments volume, cross-border volume, and processed transactions.”

Visa’s FYQ3 2017 earnings report:
“Net operating revenue of $4.6 billion, an increase of 26%, driven by the inclusion of Europe and continued growth in payments volume, cross-border volume, and processed transactions.” 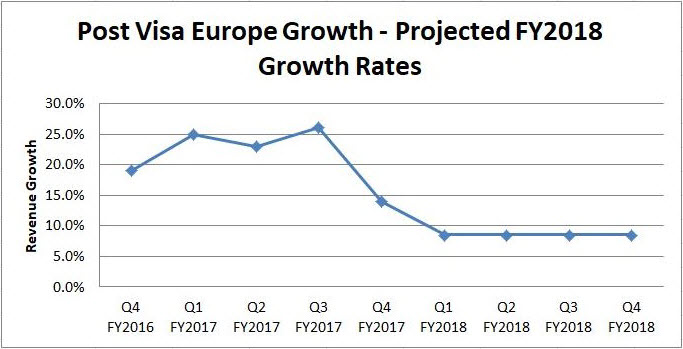 Figure 1 – Revenue growth starting with Visa Europe integration in FYQ4 2016 through FY2017 with Visa’s management forecast for FY2018 (modeling 8.5% growth for each quarter in FY2018)

The Visa Europe acquisition has been a tailwind for the company, translating into phenomenal transaction and volume growth; however, this was expected. Beginning with the initial quarter, Visa started reporting the fully integrated company; these numbers have been fantastic. Visa Inc. (NYSE:V) has been posting great growth across all segments of its enterprise further accentuated by the Visa Europe acquisition. Meanwhile, the company continues to grow its dividends and engage in consistent share repurchases. It’s noteworthy to point out that Visa has been buying back its stock at near all-time highs as of recent. Visa has continued to be a best-in-class large-cap growth stock; however, I‘ll contend that the growth rate is misleading and the incorrect comparator is being used as a growth barometer. This is becoming more and more apparent with the latest 14% revenue growth and forecast of high single-digit growth rates. I feel that Visa is overvalued based on FY2018 with its true growth test in Q1 FY2018.

Acquisition of Visa Europe enabled Visa to add 3,000 European issuers, over 500 million card accounts and more than €1.5 trillion in payments volumes. Visa has also managed to gain domestic market share from rivals with Costco (NASDAQ:COST), USAA and Fidelity. As part of the Costco transition, millions of co-branded American Express (NYSE:AXP) Costco cards were switched over to Visa. Fidelity has over 500 million cardholders that have been converted to Visa from American Express this year. USAA is the 10th largest credit and debit card issuer in the U.S. and recently converted to Visa from MasterCard (NYSE:MA). Taken together, the Visa Europe acquisition and major client wins enabled a spike in growth that will likely provide a durable growth driver over the years to come.

Although these are all great catalysts, my concern lied in two areas:

Thus far this appears to be unfolding with Q4 2017 numbers posting a 14% growth and Visa’s management forecasting only high single-digit growth rates.

Thus far in FY2017, all numbers have been compared to the pre-Visa Europe acquisition numbers. This is an unfair comparator as growth was expected to spike moving into FY2017. Therefore, all four FY2017 quarters have had the same comparator, a pre-Visa Europe. Visa has no more quarters to continue these amazing numbers; thus, Q1 FY2018 will be the true growth story since numbers will be compared on a constant basis with Visa Europe under its umbrella.

All of Visa’s numbers have been great when compared to the quarters subsequent to the Visa Europe acquisition. I think these growth numbers are misleading and serve as an incorrect comparator. Taking a look at back-to-back quarterly comparisons from the initial quarter Visa Europe was included in the earnings results, we can see a one-time spike in revenue across the entire enterprise (Figure 2). 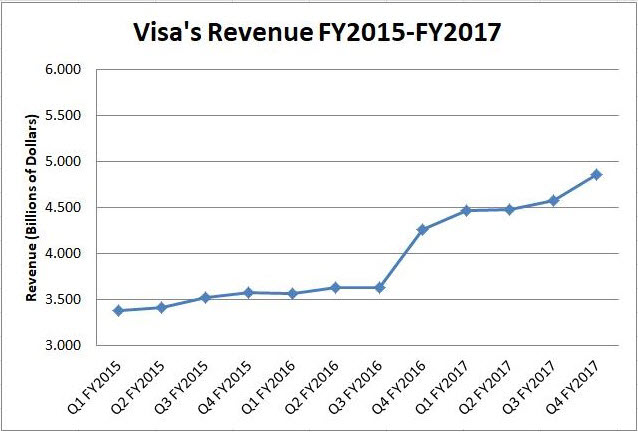 Regardless of EPS, P/E and PEG Numbers

I’m taking the revenue position in this analysis as this is the true measure of business activity and growth. EPS, P/E and PEG can all be misleading in different ways and easily be financially engineered via share buybacks. While EPS growth is ostensibly great, without revenue growth, it’s meaningless. This stock has appreciated 41% YTD, is richly valued and possesses a lofty premium relative to other large-cap growth stocks. Overall revenue growth will slow significantly and does not justify this 41% appreciation in this large-cap company.

These trends indicate that year-over-year growth rates are largely attributable to Visa Europe and thus an incorrect comparator. After a full year of Visa Europe earnings on the books, these growth rates will likely slow down dramatically as we are witnessing with the latest 14% growth in Q4 2017. Any miss or significant slowdown in future quarterly earnings could derail this stock as it's priced for perfection.

Future catalysts may mitigate this proposed thesis such as continued strength in the U.S. and E.U. while further inroads into India and China may unlock additional growth opportunities. Visa’s CEO spoke about these potential market opportunities with a positive outlook during a recent interview. Secular trends towards cashless societies bode well for Visa and the entire credit card space. There’s been speculation that Amazon.com Inc. (NASDAQ:AMZN) may be a long-term risk to payment processors based on signs that Amazon is creating a branded staged wallet payment service. Additionally, Amazon Web Services is ready to handle the technology load of processing payments if it decides to explore this payments space. PayPal Holdings Inc. (NASDAQ:PYPL), parent of Venmo partners with Visa; however it is also using bank accounts directly, totally by-passing Visa’s network and relationship.

Taking a look at pre and post-Visa Europe year-over-year quarterly comparisons, one-time spikes in revenue and thus growth rate was observed. These trends indicate that the Visa Europe acquisition is largely attributable to these year-over-year growth rates. I feel that these year-over-year comparisons are incorrect since Visa moved from a constant business model to absorbing the Visa Europe business. Now that the growth euphoria has diminished as predicted in my previous articles (the last quarterly growth of 14%), management has come out and forecasted revenue growth of “high single digits” moving forward which is a far cry from the double-digit growth rates over the past five quarters. Visa Inc. (NYSE:V) has appreciated 41% YTD and is at all-time highs. The stock is facing a growth slowdown ahead and in my opinion, does not justify this lofty valuation and stock price. After a full year of Visa Europe earnings on the books, these growth rates will slow down dramatically as I outlined here and in previous articles. This growth can be bolstered as many countries continue to make a secular transition towards cashless societies. However, considering Visa's lofty premium and slowing growth rate, I'd be cautious and wait for a better entry point while being cognizant of the ensuing slowdown in growth as Visa Europe matures into the revenue stream.