CVS Health Corporation (NYSE:CVS) recently touched down to a 52-week low of ~$60 per share which is a drastic decline from its all-time high of $112 in 2015 translating into a nearly 50% slide in its shape price. Its P/E ratio is in sub-10 territory against an S&P 500 average of 24, suggesting CVS is roughly 60% cheaper than the average stock. Its decline has unfolded in the face several headwinds that have negatively impacted its growth, and the changing marketplace conditions have plagued the stock. Starting in the latter half of 2015 and still unfortunately persisting, the political backdrop was a significant headwind for the entire pharmaceutical supply chain from drug manufacturers to pharmacies/pharmacy benefit managers (i.e. CVS and Walgreens (WBA)) and the drug wholesalers in-between (i.e. McKesson (MCK), Cardinal Health (CAH) and AmerisourceBergen (ABC)). As an extension of the political climate, the drug pricing debate has not subsided and continues to be a hot-button issue weighing on the overarching sector. In an effort to address these headwinds and restore growth CVS has made a bold $69 billion acquisition of Aetna (AET) to form a colossus bumper-to-bumper healthcare company. This new CVS will combine its existing pharmacy benefits manager (PBM) and retail pharmacies with the second largest diversified healthcare company. This is a bold and hefty price tag to pay yet may be necessary to compete in the increasingly competitive healthcare space in the face of drug pricing pressures. CVS is making a defensive yet essential acquisition moving into the future. As CVS transitions and realigns its business to adapt to the changing healthcare space along with Amazon’s (AMZN) competitive threat diminishing, I feel the stock is too cheap to ignore at these levels. Initiating a position near ~$60-$65 may be a substantial long-term investment for long-term value and appreciation.

Amazon has officially entered the retail space via the Whole Foods acquisition. It had been rumored for months that Amazon was gearing up to gain entry in the potentially lucrative $560 billion prescription drug space by leveraging the Whole Foods storefronts. The speculation was rooted in Amazon’s ramped up hiring and talent acquisition to build an internal pharmacy benefits manager for its own employees. This internal effort was viewed as a proof-of-concept for the broader drug supply chain effort. Amazon has a health team that’s focused on both hardware and software projects, like developing health applications for the Echo and Dash Wand. Its cloud service, Amazon Web Services, continues to dominate the health, life sciences, and technology market as well. Amazon still has the potential with its technology and reach to disrupt the current marketplace however as of now Amazon has decided to not pursue this business in the near future.

It’s been reported that Amazon has capitulated on this front and will not pursue entry into this space after a deal couldn’t be reached sell and distribute pharmaceutical products through Amazon Business. A major challenge was the complex nature of selling to hospitals in bulk and building a logistics infrastructure to contend with pharmaceutical deliveries. Amazon will still sell less sensitive medical supplies to hospitals and smaller clinics. Per CNBC, Amazon was unable to convince big hospitals to change their traditional purchasing process and the need to build a more sophisticated logistics network to handle temperature-sensitive pharmaceutical products. Shares of pharmacy benefit managers and drug wholesalers such as CVS, Walgreens (WBA), McKesson (MCK) and Cardinal Health (CAH) spiked on the news.

The backdrop before the potential Amazon threat was positive in my opinion considering the past acquisitions of Target’s (TGT) pharmacies and Omnicare. These proactive measures significantly expanded its presence and ability to dispense prescriptions to the general public and in long-term care facilities. As healthcare costs and prescription drug costs continue to rise and the population continues to age with the elderly comprising a larger segment of the overall population CVS was well positioned. Now that the competitive threat has been removed, for now, CVS may be able to regain some of its market capitalizations.

To further boost long-term growth prospects and fend off potential competition, CVS made a move to acquire Aetna and creates the first through-in-through healthcare company, combining CVS's pharmacies and PBM platform with Aetna's insurance business. Collectively, the acquisition is valued at $78 billion between stock and cash.

"This combination brings together the expertise of two great companies to remake the consumer healthcare experience." "With the analytics of Aetna and CVS Health's human touch, we will create a healthcare platform built around individuals." CVS President and CEO Larry Merlo said in a statement.

The acquisition will provide CVS with more scale to bargain for better prices for the prescription drugs it sells through its PBM business. For Aetna, the deal is a pivot after its attempted merger with Humana was blocked by a federal court on antitrust grounds. This would be a vertical integration for CVS as opposed to a horizontal acquisition of a direct competitor. These types of acquisitions are ostensibly more likely to pass antitrust authorities for approval. If this acquisition is approved, I think CVS will be a benefit in the long-term as this is a much-needed move to fend off competition in the space and restore growth within the company. Thus far the acquisition is proceeding as planned. 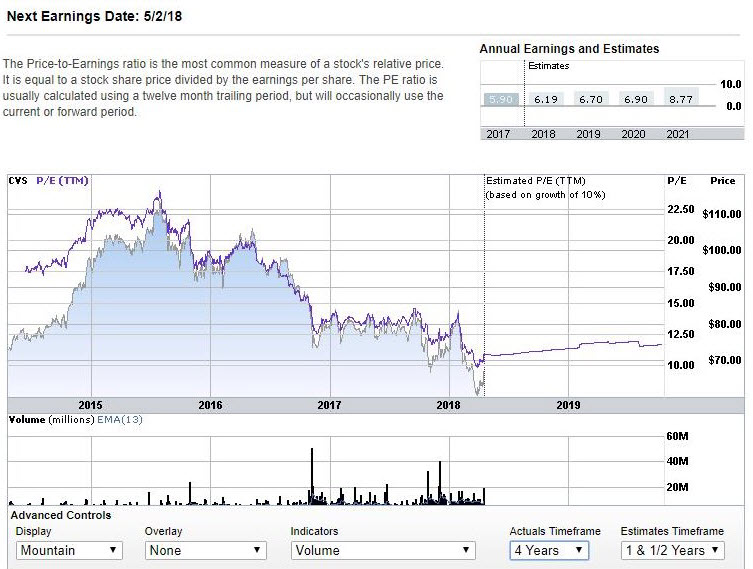 Figure 1 – E*Trade P/E trends as it relates to share price over the past four years, sitting at lows of ~10 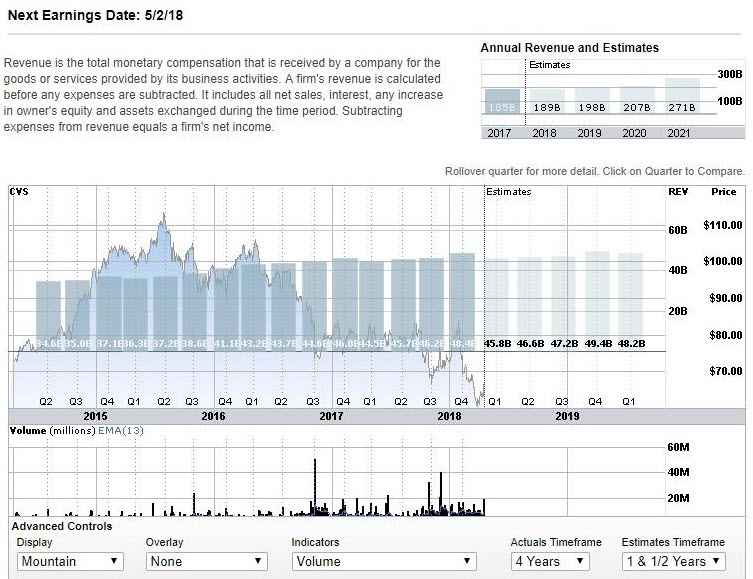 CVS Health Corporation (NYSE:CVS) is simply too cheap to ignore as the company continues to make strategic acquisitions via Aetna to grow its business long-term while expanding its moat to fend off competition. CVS is going all in with a $69 billion acquisition of Aetna to form a potential colossus healthcare company. This new CVS will combine its pharmacy benefits manager (PBM) and retail pharmacies with the second largest diversified healthcare company. Since its all-time highs in 2015, several headwinds have negatively impacted its growth, and the changing marketplace conditions have plagued the stock. Exacerbating this downward trend was Amazon’s potential entry into space. Now that Amazon has officially capitulated on its efforts to enter into the pharmacy space, CVS and associated stocks saw a spike in share price. With this competitive threat now removed in concert with CVS’s realigned business and acquisitions, I think the stock is too cheap at these levels.

Disclosure: The author does not currently hold shares of CVS. The author has no business relationship with any companies mentioned in this article. He is not a professional financial advisor or tax professional. This article reflects his own opinions. This article is not intended to be a recommendation to buy or sell any stock or ETF mentioned. Kiedrowski is an individual investor who analyzes investment strategies and disseminates analyses. Kiedrowski encourages all investors to conduct their own research and due diligence prior to investing. Please feel free to comment and provide feedback, the author values all responses. The author is the founder of stockoptionsdad.com a venue created to share investing ideas and strategies with an emphasis on options trading.

4 thoughts on “CVS: Amazon Capitulates - Too Cheap To Ignore?”