Visa Inc. (NYSE:V) shareholders have witnessed a meteoric rise in share price since the post-Visa Europe integration which provided a double-digit annualized one-time boost to revenue growth and thus was being used as an incorrect growth comparator. Additionally, since Donald Trump was elected president, the vast majority of stocks have seen significant gains, and Visa is no exception, moving from $78 per share in December of 2016 to $126 in January of 2018 or a 60% appreciation. Now that Visa Europe has been fully reflected in its numbers, the double-digit revenue growth ceases to exist, and its lofty valuation is unjustified. Visa’s management has now forecasted revenue growth in the high single-digits for the foreseeable future with EPS growth in the mid-teens, artificially high due to share buybacks. With revenue growth rates slowing to single digits coupled with the past year appreciation and the stock boasting a P/E in excess of 40, I feel that further appreciation is unjustified and entering a position at these heightened levels is not prudent. Furthermore, Visa faces a rapidly changing landscape in the payments and peer-to-peer space with the likes of Pay Pal (PYPL), Square (SQ), Amazon (AMZN) and an emerging platform for bank transfers with Zelle. Blockchain technology also continues to gain ground in a variety of industries, and I feel that it will inevitably enter into the credit card transactions space.

Pay Pal’s CEO was interviewed on Jim Cramer’s Mad Money, and he had an interesting view on international markets and the financial transactions space.

"The entire financial systems' ecosystem is moving more rapidly than ever before away from cash and towards digital payments because of the explosion of mobile phones."

"If you look at markets like China or India, India really going through demonetization right now, they never really had point of sale terminals, credit card and what they're trying to do now is do everything through digital"

"When you go through digital its's a more efficient system, there aren't middlemen in-between to take part of the transaction, and there's less corruption."

"For government benefits, there's much less leakage if it can go directly from the government right into a digital wallet of the consumer."

"You're seeing leapfrogs over what were credit card infrastructure or checking."

"Nothing against Mastercard and Visa, they're still great growth stocks, but the growth of the future is yours [Pay Pal]."

This commentary throws some cold water on Visa’s international expansion efforts outside of Europe. He alludes to the future of payments and money transfers with companies such as Pay Pal (PYPL) and its other platform Venmo. He's envisioning a future where the credit card middleman model will not be part of the payments mix in India and China since it really never has been part of the mix.

Moving further down the line, Amazon (AMZN) is potentially moving into the space as well via banking and may start to offer peer-to-peer payments and banking options for the unbanked (those that do not possess a bank account). Per a Bain & Company report, Amazon could become the third-largest U.S. bank, citing that Amazon's banking services could grow to more than 70 million U.S. consumers over roughly five years, rivaling Wells Fargo. What's more noteworthy as it pertains to credit card companies, Amazon could avoid more than $250 million in credit card interchange fees every year if it finds a bank willing to partner. Amazon is in talks with J.P. Morgan Chase which aims to capture younger demographics and those without banking accounts.

"We could imagine Amazon's banking services growing to more than 70 million U.S. consumer relationships over the next five years or so — the same as Wells Fargo, the third-largest bank in the US.," wrote Bain's Gerard du Toit and Aaron Cheris. Saving $250 million in credit card interchange fees is significant on its own and even more so if other companies adopt this model over the coming years to circumvent the credit card companies.

For FY2017, all numbers have been compared to the pre-Visa Europe acquisition numbers (FY2016). This is an inaccurate comparator as growth was expected to spike moving into FY2017. Therefore, all four FY2017 quarters have had the same comparator, a pre-Visa Europe. Visa doesn’t have any more quarters to continue these amazing numbers; thus, Q1 FY2018 exposed the true growth story since numbers were compared on a constant basis with Visa Europe under its umbrella. Taking a look at back-to-back quarterly comparisons from the initial quarter Visa Europe was included in the earnings results, we can see a one-time spike in revenue across the entire enterprise (Figure 1). Now, growth is moderating with zero growth from the most recent back-to-back quarters. 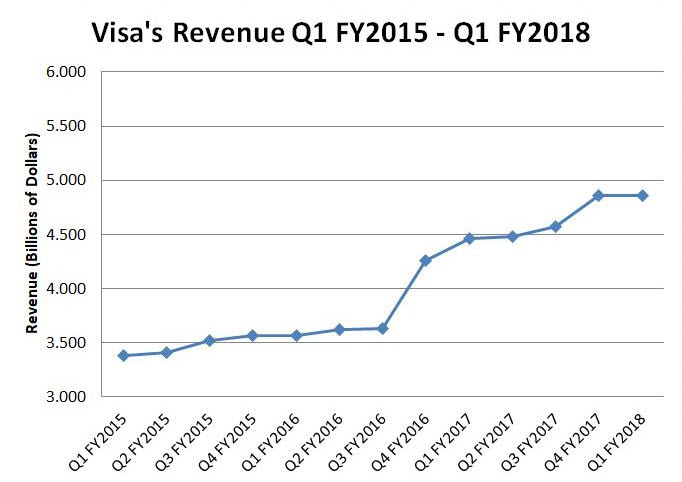 Visa’s stock price is misaligned with its overall revenue growth prospects with an unjustified P/E (> 40) and PEG ratio that remains higher than the majority of large-cap growth stocks that have a greater growth profile. Visa’s management has forecasted continued revenue growth in the high single digits with EPS growth in the mid-teens, artificially high due to share buybacks. This forward-looking revenue growth rate is a sharp divergence from the past year-plus revenue growth numbers. Visa just recently reported quarterly results for Q1 FY2018, with beats on both the top and bottom lines. FYQ1 2018 revenue growth numbers came in at 9%. Clearly this is a different growth narrative. FY2018 is off to single-digit year-over-year revenue growth which management affirmed will be the case for the remainder of FY2018 (Figure 2). 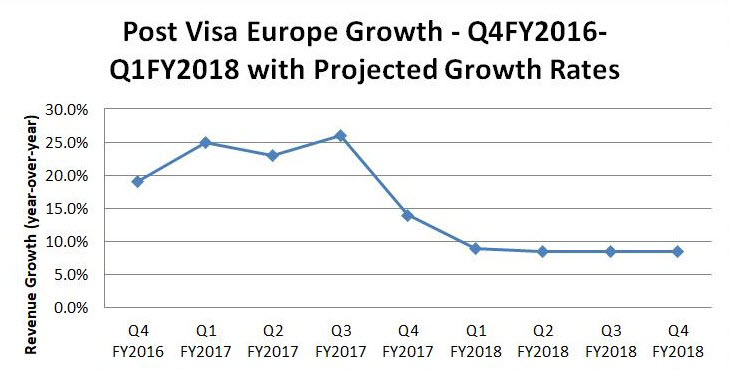 Figure 2 – Author's original work of year-over-year revenue growth starting with Visa Europe integration in FYQ4 2016 through FY2017 with Visa’s management forecast for the remainder of FY2018 (modeling 8.5% growth for the remaining quarters in FY2018) per Visa's SEC filings

Visa Inc. (NYSE:V) faces some potential headwinds in the transactions space from varying competitors and trends in emerging markets that don’t include credit cards are part of this mix. Blockchain remains a long-term threat to the transactions space as many industries are dipping their toes into the water with this technology. Looking at pre- and post-Visa Europe year-over-year quarterly comparisons, one-time spikes in revenue and thus growth rate were observed. These trends indicate that the Visa Europe acquisition is largely attributable to these year-over-year growth rates. The last quarterly growth of 9% is a far departure from the previous 4-5 quarters of growth and management has forecasted revenue growth of “high single digits” moving forward through FY2018. Visa has appreciated 60% since the post-Visa Europe acquisition and the 2016 presidential election. The stock is facing a growth slowdown and in my opinion, does not justify this lofty valuation and stock price. Considering Visa's lofty premium and slowing growth rate, I'd be cautious of the ensuing slowdown in growth as Visa Europe matures into the revenue stream. I feel that headwinds are ahead for further stock appreciation and the shares are priced for perfection with its lofty valuation.

Disclosure: The author does not hold shares of Visa. The author has no business relationship with any companies mentioned in this article. He is not a professional financial advisor or tax professional. This article reflects his own opinions. This article is not intended to be a recommendation to buy or sell any stock or ETF mentioned. Kiedrowski is an individual investor who analyzes investment strategies and disseminates analyses. Kiedrowski encourages all investors to conduct their own research and due diligence prior to investing. Please feel free to comment and provide feedback, the author values all responses. The author is the founder of stockoptionsdad.com a venue created to share investing ideas and strategies with an emphasis on options trading.