Facebook’s (FB) disastrous second quarter conference call erased $119 billion in market capitalization in a single session marking the worst one day drop for any large-cap company in history while the stock shed a fifth of its value. Since then, ancillary fallout emanating from its core data misuse scandal involving Cambridge Analytica continue to surface.

Security issues affecting 50 million accounts, a lawsuit alleging concealing video ad measurements and increasing EU scrutiny have continued to plague the stock since its second-quarter implosion. The original mishandling user data resulted in the stock tumbling from $195 to $152 or 22% at the time. Facebook appreciated off those data misuse lows and broke out to $220, however, this scenario ended abruptly on the heels of its Q2 earnings. Facebook issued a major guide down in growth for the next few quarters tampering growth expectations in the near term. Facebook is facing a challenging confluence of slowing revenue growth, margin compression and stagnant daily active users in the near to intermediate term.

There’s been a recent initiative that has the backing of four large institutional investors to remove Mark Zuckerberg as Facebook’s chairman in the wake of all of these security issues. Despite these headwinds, Facebook is still posting accelerating revenue growth across all geographies, expanding market penetration with Instagram’s IGTV, Facebook’s Stories and monetization efforts in Messenger and WhatsApp. Facebook is still poised to grow at a double-digit clip with the most recent growth rate coming in at 42% in Q2.

The long-term picture looks bright for Facebook, and the recent sell-off in the stock and tech cohort is a good opportunity to initiate a long position as the company contends with and addresses all the issues across its platforms (Figure 1). Facebook remains a premier large-cap growth stock and inexpensive relative to other large-cap growth stocks in its cohort heading into Q3 earnings. 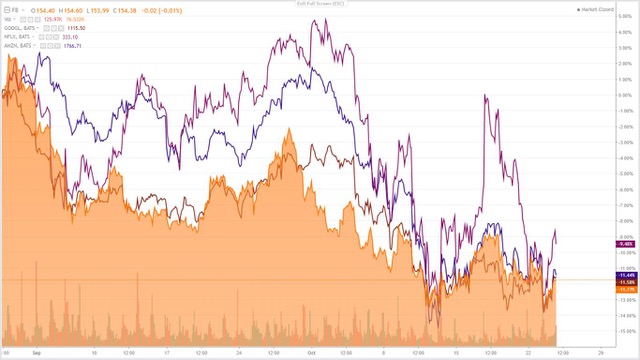 Figure 1 – FANG cohort performance throughout the tech sell-off with Facebook, Amazon, Netflix, and Google all shedding ~10% of their market capitalization

There’s been a slew of negative press regarding additional issues negatively impacting the company’s platform and inflicting further damage on its reputation. Facebook disclosed a security issue that affected 50 million accounts. Per Facebook, attackers "exploited a vulnerability in Facebook’s code" related to "View As" that lets users see what their profile looks like to other users. That vulnerability allowed malicious users to steal access tokens usable to take over people's accounts. The company says it abruptly fixed the vulnerability and reset the access tokens on the nearly 50M accounts. Furthermore, per the Wall Street Journal, Facebook knew about issues related to the measurement of video ads and failed to disclose them for more than a year according to an advertiser complaint. The advertiser group filed the lawsuit over the unfair business conduct and recently added fraud to the claim. Meanwhile, Facebook has stated that the suit lacks merit. Lastly, there’s a growing movement to put pressure on Mark Zuckerberg to shore up its platform and regain its reputation and trust of its user base. Four influential institutional investors are filing a shareholder proposal to remove Mark Zuckerberg as Facebook’s chairman considering all the blunders in 2018. Trillium Asset Management filed the proposal to oust Zuckerberg in June, and it now has backing from the state treasurers of Rhode Island, Illinois, and Pennsylvania along with the New York City comptroller.

Facebook posted the largest one-day loss in market value by any company in stock market history. Facebook shed $119 billion worth of market capitalization after dropping ~20%. No other company has ever lost greater than $100 billion in market value in a single day (Figure 2). This sell-off came on the heels of a revenue miss of $13.04 billion versus expectations of $13.16 billion and lower than expected daily active users in Europe. Key metrics suffered from data misuse and fake news issues within its platform.

Facebook has had a rather choppy history when it comes to conference calls and subsequent sell-offs (Q2 and Q3 of 2016 both saw sell-offs of 8%), but this one takes the cake without a doubt.

Facebook warned investors that it expected revenue growth to be lower than the previous year, especially in the second half of 2018. On the conference call, CFO David Wehner stated shareholders could expect "revenue growth rates to decline by high single-digit percentages from prior quarters" for the third and fourth quarter. "We plan to grow and promote certain engaging experiences like Stories that currently have lower levels of monetization, and we are also giving people who use our services more choices around data privacy which may have an impact on our revenue growth," Wehner also said currency fluctuations would hurt the stock in the second half of the year, after helping it for the last several quarters. Wehner went on to say that the company expects margin compression, with operating margins trending toward "mid-30s on a percentage basis," compared with second-quarter operating margins of 44 percent.

That margin compression is the result of expanding markets, investments in new products such as the company's long-form video format, IGTV and capital expenditures related to safety and security that total "billions of dollars," Wehner said. "We think that's the right thing to do for the business regarding ensuring the community, safety, and durability of the franchise," he said. "But they don't have an obvious immediate translation into revenue dollars." Over the past few quarters, Facebook has ramped up spending on initiatives to combat fake news, ensure data integrity, implementing stringent guidelines on third-party data sharing and overall transparency within its platform. Facebook had already moved to overhaul its news feed in favor of “meaningful social interactions” versus “relevant content” to improve its user experience. 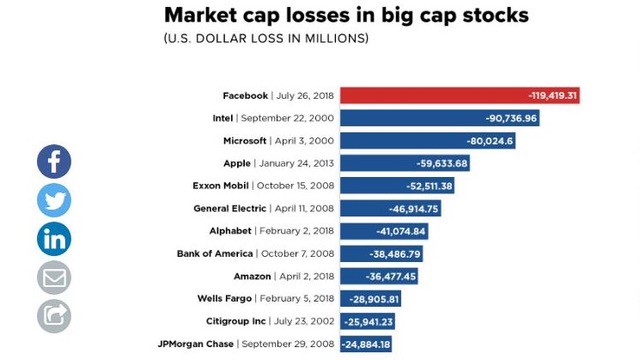 Facebook posted revenue growth of 42% coming in at $13.231 billion against $9.321 billion in the prior year. EPS grew by 32% coming in at $1.74 against $1.32 in the prior year. Daily and monthly active users were up 11% year-over-year on the whole. Facebook ended the quarter with $42.31 billion in cash and cash equivalents. Facebook also reported growth in revenue across every geography during the quarter. Facebook has been growing revenue by over 40% as of the last few quarters and factoring in a “decline by high single-digit percentages from prior quarters" let’s assume this growth rate settles at 25%. Facebook now trades at ~$155 per share after this sell-off and now trades at a P/E ratio of 24 and a PEG ratio (P/E ratio divided by growth rate) of 1.45 suggesting an annual growth rate of ~17% in EPS. EPS as of Q2 2018 was $6.46 thus factoring in a 17% premium we would theoretically arrive at $7.55 at the end of Q2 2018. Assuming Facebook continues to trade at a P/E of ~25 with an EPS of $7.55, the stock price would be ~$190 per share, conservatively by this time next year. I think Facebook is guiding too low to be conservative thus I feel investors will still enjoy ~25% revenue growth with a P/E of ~30 placing the stock price at ~$240 per share within one year.

The recent rout in the broader market and in particular the technology sector has exacerbated Facebook’s revenue growth slowdown, margin compression, and daily active user stagnation. 2018 that witnessed several issues related to user privacy, data security and misinformation scandals and as an extension the company has seen many high-level executive departures. Despite these headwinds, Facebook remains a long-term buy especially after this major sell-off while revenue growth remains best-in-class within the large-cap cohort. The broader questions of potential regulation, public backlash, additional data misuse cases and whether or not any material impact on revenue, as a result, remain in question. Facebook is trying to get out ahead of any of these issues by spending billions on initiatives to combat fake news, ensure data integrity, implementing stringent guidelines on third-party data sharing and overall transparency within its platform. Despite all the headlines regarding the privacy scandal and slowdown in revenue growth, Facebook posted a monster blowout for its Q2 2018 numbers with an 11% increase in active users while growing revenues by 42% to $13.2 billion. Facebook looks like a compelling buy heading into Q3 earnings. In my opinion, Facebook is the most compelling high-growth technology stock when compared to other companies with a similar growth profile and market capitalization.

Disclosure: The author trades options on Facebook. The author has no business relationship with any companies mentioned in this article. He is not a professional financial advisor or tax professional. This article reflects his own opinions. This article is not intended to be a recommendation to buy or sell any stock or ETF mentioned. Kiedrowski is an individual investor who analyzes investment strategies and disseminates analyses. Kiedrowski encourages all investors to conduct their own research and due diligence prior to investing. Please feel free to comment and provide feedback, the author values all responses. The author is the founder of stockoptionsdad.com a venue created to share investing ideas and strategies with an emphasis on options trading.

One thought on “Facebook - Compelling Buy Heading Into Q3 Earnings”