Facebook Inc. (FB) crushed its Q1 2019 earnings estimates on both top line revenue and bottom line profit. Revenue grew 26% year-over-year, giving rise to investor amnesia as it relates to its string of privacy scandals. Facebook is now testing its all-time highs with a reasonable price-to-earnings multiple when compared to its tech cohort. As the company attempts to move past its privacy issues while restoring trust with its user base, negative sentiment has abated. Facebook continues to post unparalleled growth for a company of its size while its platforms are the go-to properties for advertisers and influencers. Will Facebook be able to march forward without being plagued by the slew of issues ranging from international regulatory scrutiny, user privacy issues, high-level employee mass exodus, and a questionably toxic company culture? Some analysts argue that the negative confluence of the aforementioned issues will drive up costs, narrow revenue streams, and weaken the user base. The privacy scandal has already resulted in increased costs surrounding compliance, monitoring, censorship, and scrubbing the platform from deceptive marketing. If the company continues its path forward on the privacy front while posting best-in-class revenue growth, the stock will likely continue to elevate higher.

Facebook continues to deliver phenomenal growth across the company while its cash hoard swells to $45 billion. The company posted EPS and revenue of $1.89 and $15.08 billion, respectively. These numbers beat on EPS by $0.27 and beat on revenue by $104.3 million.

"We had a good quarter, and our business and community continue to grow," said Mark Zuckerberg, Facebook founder, and CEO. "We are focused on building out our privacy-focused vision for the future of social networking, and working collaboratively to address important issues around the internet."

The stock exploded higher on the earnings news, shooting from $182 to $195 or 7% in a single session. Facebook’s properties continue to grow and continue to expand its revenue moat in advertising spend. Instagram and Whatsapp will likely serve as major growth catalysts as these assets still have a lot of room for its monetization efforts.

Sandberg and $3-$5 Billion in Settlement Earmarks

The company disclosed in its Q1 report that it had earmarked $3 billion for a potential settlement deal with the Federal Trade Commission (FTC). The FTC and Facebook are negotiating terms of a settlement that would create a new set of privacy practices and roles in conjunction with a multibillion fine that may be as high as $5 billion. The settlement would include a privacy official who would be approved by the government and an independent oversight committee that may include the appointment of board members. The company would also designate a compliance officer who would ultimately be responsible for the policies, and in this case, it would likely be Mark Zuckerberg. Sheryl Sandberg, Facebook’s COO was on Capitol Hill to meet with lawmakers to iron out details surrounding its settlement with the FTC. The company is putting its best foot forward to reign in its privacy issues and put these issues in the past. To this end, a multi-billion dollar fine is part of the process.

A New York Times op-ed by the company's co-founder, Chris Hughes, titled “It’s Time to Break Up Facebook.” Hughes stated his rationale for his thesis with the following excerpts.

"But I’m angry that his [Mark Zuckerberg] focus on growth led him to sacrifice security and civility for clicks. I’m disappointed in myself and the early Facebook team for not thinking more about how the News Feed algorithm could change our culture, influence elections, and empower nationalist leaders. And I’m worried that Mark has surrounded himself with a team that reinforces his beliefs instead of challenging them."

"Mark’s influence is staggering, far beyond that of anyone else in the private sector or in government." (Figure 1). 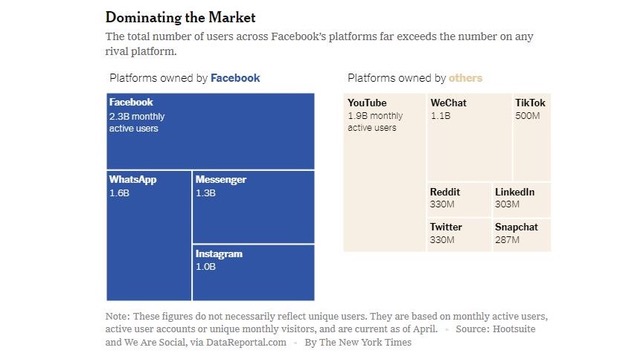 Sen. Richard Blumenthal was interviewed on CNBC and suggested that the company should indeed be broken up, and its acquisitions of Instagram and Whatsapp should be retroactively reexamined. He was critical of the idea that a potential FTC fine over privacy violations might be limited to $3-$5 billion.

I feel that Facebook has made great strategic acquisitions over the years and created what the company has become in its current form.

Facebook has been mired in privacy scandals, public relations mismanagement, a conference call that wiped out $119 billion in market capitalization in a single session and a very public exodus of many high-level departures across the company. There’s a laundry list of mishaps originating from its data misuse scandal involving Cambridge Analytica as that continued to surface across the globe. Security issues affecting 50 million accounts, a lawsuit alleging concealing video admeasurements and increasing EU scrutiny plagued the stock.

Emanating from these issues, many notable personnel have departed from the company. A dozen or so high-level executives have departed the company over the past year. Recently, Chris Fox, Facebook’s top executive in charge of all products is leaving the company. Jan Koum, co-founder of WhatsApp, Elliot Schrage, head of communications and public policy, Colin Stretch, Facebook's top lawyer, Alex Stamos, chief security officer, Dan Rose, vice president of partnerships, Rachel Whetstone, a top communications executive, Alex Hardiman, head of news products, Kevin Systrom and Mike Krieger, the co-founders of Instagram and finally Brendan Iribe, the former CEO and co-founder of Oculus. All these exits cap 2018 that witnessed several issues related to user privacy, data security, and misinformation scandals. Facebook has a lot of work ahead of its to reign-in all these issues and retain talent in what appears to be a questionable company culture.

Facebook is being faced with a potential multi-billion dollar fine from the FTC and facing a very public push to break the company up. Facebook has inflicted major damage to its reputation and trust as the laundry list of mishaps continues to evolve. Facebook has been mired in privacy scandals, public relations mismanagement, a conference call that wiped out $119 billion in market capitalization and a very public exodus of many high-level departures across the company. Facebook is attempting to put these issues behind the company by spending billions on initiatives to combat fake news, ensure data integrity, implementing stringent guidelines on third-party data sharing, and overall transparency within its platform. Despite these issues, Facebook has grown its revenues by over 30% for 21 consecutive quarters just prior to its recent quarter of 26% revenue growth, and the stock exploded higher on the news. All-in-all, Facebook has been painful to hold through this period of volatility. However, long-term holders will likely be rewarded as these issues abate, and Facebook corrects its mistakes and repairs the company culture.