Does history repeat itself? Are price patterns and chart patterns reliable enough to suggest that a global Real Estate market collapse may be set up? What would it take for another Real Estate collapse to take place in today’s global market?

First, let’s start with this simple chart highlighting the “Bear Flag” setup from 2007 and the current 2019 Bear Flag setup. This price pattern was enough of an early warning sign for our research team to run into our offices and tell us of the exciting pattern they just identified regarding Real Estate and what they thought could happen. We listened to them share their ideas and concepts of how we have 11 months to go before the 2020 US Presidential election takes place and how higher risk delinquencies and foreclosures are starting to spike. They suggested the political theater of the global markets and US election cycle will likely distract from the weakening economic cycle which could present enough “smoke and mirrors” to keep investors’ attention away from this potential collapse in the housing market.

Much like a magician attempts to distract you just long enough to pull of their new trick, could the political theater, global economic news cycles and the never-ending battle in Washington DC be just enough of a distraction that skilled traders miss this critical setup? We hope not.

The peak that occurred in 2007 setup about 19 months before the 2008 Presidential election took place. The 2019 peak occurs about 13 months before the 2020 Presidential election. In both instances, a highly contentious political battle is taking place which may distract traders and investors from really paying attention to the underlying factors of the global markets.

A real estate crash is no something to dismiss. For most of the people, their home is the nest egg, or their largest investment and watching this asset tumble in value 10, 20, 30% or more is serious. Before you continue, take a couple of seconds and join our free trend signals email list. 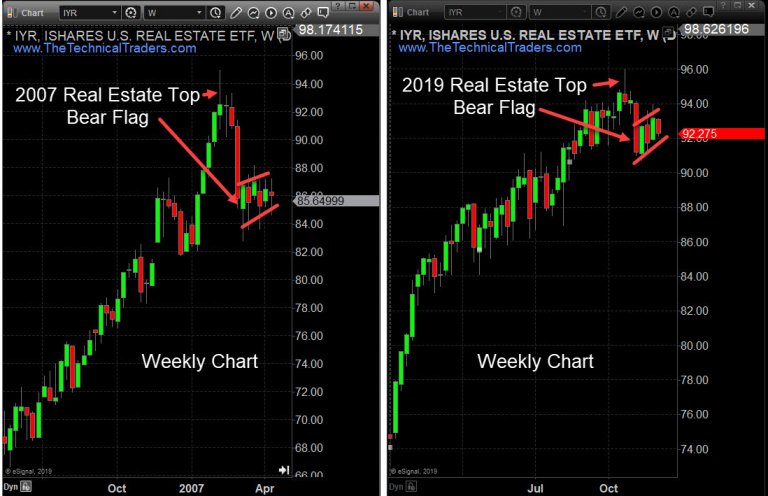 Recent economic data suggests that builders and permits experienced an increase over the past 60 days – which is vastly different than what happened in 2006-2007. By the time the Bear Flag had setup in IYR in 2007, new building permits had already started to fall dramatically – for at least 12+ months prior to March 2007. Currently, the number of building permits on record is sitting near 50% of the range established between 2000 and 2009.

The recent increase in building permits could indicate a euphoric level of buying/flipping by builders and speculators thinking “its easy to make profits flipping these homes in this market”. Much like the euphoric activity before the 2007 crash.

The collapse that happened after the Bear Flag setup in IYR in 2007 resulted in a dramatic -73% decline in value over a very short 24 month period. Could something like this happen again in today’s market?

Our research team raised a couple of interesting points relating to the potential for a “rollover” type of event taking place over the next 12+ months.

First, the US Presidential election cycle could setup a very real fear that a new president could attempt to derail/damage the marketplace with new policies, taxes and other unknowns.

Second, the current Real Estate market has experienced real price growth for almost 10+ years since the 2009-2010 bottom and wage earners may already be priced out of certain markets – reducing overall demand at current price levels.

Third, a lot of recent news has been published showing massive amounts of people moving away from larger cities/states like New York, California, New Jersey, Chicago, and other locations. These people are moving away from higher taxes and housing costs and trying to move to areas that are cheaper and quieter.

Forth, there are an estimated 40+ million “baby boomer” homes that must be liquidated over the next 10+ years as these people/families transition into elderly status.

The reality is that unless price levels revert to levels that make housing more affordable or earnings levels dramatically increase over the next 3+ years, the price level for homes in the US and Canada is already historically high. 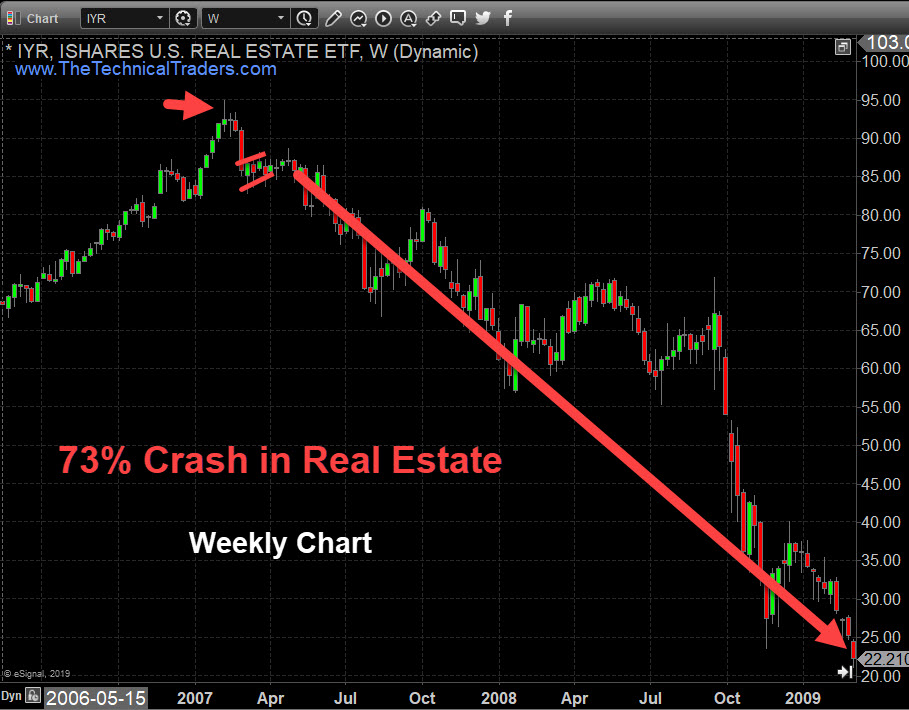 How high? Take a look at this last chart of IYR and pay attention to the fact that current price levels are already at the historic high price levels from 2007. This should tell you almost all you need to know.

Unless earning levels somehow rise dramatically over the next 24 to 36+ months, housing prices are already at or near peak levels for most consumers – even if the US Fed decreases interest rates another 25 to 50 bp.

The other thing to consider is what type of new policies, taxes, costs would a new US president do to the housing market and global stock market? What would happen in Bernie Sanders or Elizabeth Warren were to suddenly take the lead in the polls wanting to raise taxes on everyone and install new trillion-dollar policies while attacking America’s millionaires and billionaires? Think that may have some pull on the markets? 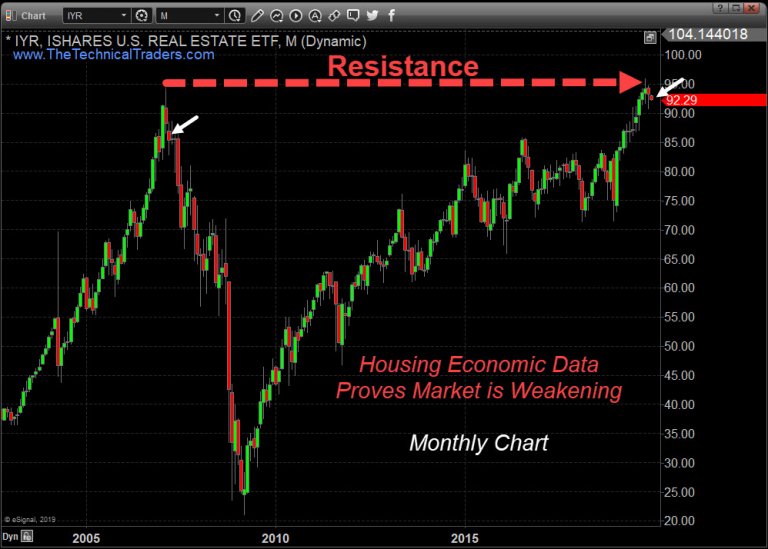 Our researchers believe we should cautiously watch IYR for further signs of weakness over the next few weeks and months. Yes, there is a very real potential that the US and global housing markets could collapse over the next few years – but right now we are looking at a Bear Flag pattern that may be an early warning sign of a potential price selloff. Nothing is confirmed yet but any week now could spark the start of something ugly for home prices.

Yes, housing market economic data show some weakening while building permits and construction ramped up last month. Housing has certainly reached a mature economic state and we believe any collapse in the global stock market could send a wave of fear throughout the housing market as people attempt to get out before prices start to collapse. We’ll keep you updated as we continue to watch the Real Estate market and our researchers pour over the data.

5 thoughts on “Is A Real Estate Crash Coming?”