If Bitcoin is the big boy on the block, Ethereum (ETH) is the second biggest. But unlike Bitcoin, Ethereum has many advantages over BTC that make it extremely attractive. In fact, every investor should consider buying a little ETH today.

While Bitcoin is a great store of value – and certainly worthy of a portion of your portfolio – it can’t do much more than transfer value. You can pay for stuff using BTC, and you can save it for a rainy day, but you can’t really do much more. That’s not a knock on BTC anymore than it would be a knock on gold or the dollar.

Ethereum, on the other hand, is a store of value like BTC. But it’s much, much more. In fact, it’s these other features that make ETH so interesting.

First off, like nearly all cryptocurrencies, Ethereum works on a decentralized, distributed ledger network. ETH is decentralized because there is no single authority – like a bank – that controls or approves transactions. And ETH is a distributed ledger because it has multiple copies of itself spread over a vast array of computers using cryptography and mathematical problems to make the network strong and safe.

But what makes Ethereum even more interesting than BTC is that its network is designed to do more than pay for stuff. Unlike Bitcoin, Ethereum’s network can facilitate an entire range of computer-generated programs. This moves Ethereum from a simple store of value to a massive computational engine.

But before we go any further, we need to distinguish between Ethereum the network and Ether, the digital currency that makes the Ethereum network hum. While often used interchangeably, think of Ethereum as the highway where all kinds of computer programs run, and Ether is the gas that moves those computer programs along the highway. It’s no wonder then that Ether is often referred to as “gas.”

Why You Should Own Ethereum: Smart Contracts And More

Of the computer programs that the Ethereum network can handle, the most fascinating is smart contracts. These self-executing programs are like a fancy snack vending machine. You pay a fee in ETH (money into the vending machine slot), the network runs your code (you push a button to pick a snack), and the network executes your contract (your snack is ready at the bottom of the machine).

This is a simple example. But smart contracts could be infinitely more complex. Take a grueling real estate transaction where there are hundreds if not thousands of procedures, steps, and intermediaries. With a smart contract, you make a list of everything that needs to be done and code it into the ethereum network. Once the list is complete, you get your house, and the seller gets their money. No more need for brokers, closing agents, or lawyers.

As you can see, smart contracts would make our lives infinitely easier. But even better smart contracts are executed without the need of banks or other intermediaries. You wouldn’t have to share your data with an army of outsiders, and no one would control your data or your transactions except you. Plus, you wouldn’t be at the mercy of the safekeeping abilities of a single data warehouse like Google. Instead, a vast array of computers would look after your smart contracts and independently make sure everything was kosher. No more hoping or guessing.

And Ethereum can execute these transactions fast. While adding a new block to the Bitcoin blockchain takes about 10 minutes, new blocks on Ethereum can be verified and added in about 12 seconds.

Ethereum Survived Last Year... And Then Some

Take a gander at this comparative chart of ETH and the S&P 500... 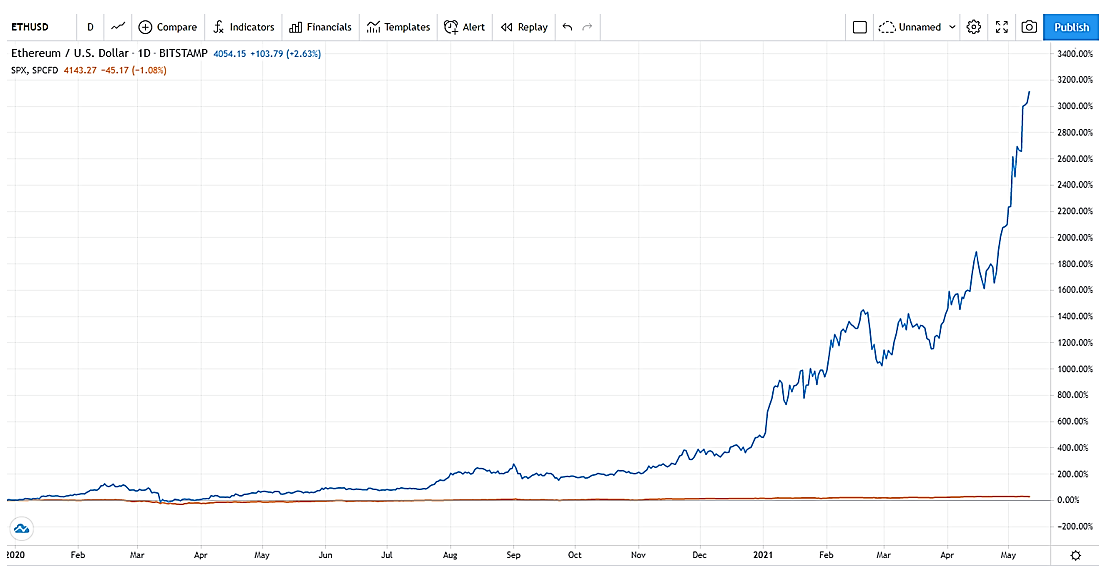 During 2020, ETH took a hit along with the broader stock market, but it quickly recovered. That shows that it has resilience and isn’t just a has-been asset to disregard.

The chart also shows the parabolic rise in ETH shortly thereafter. In fact, since the beginning of 2020, the S&P 500 – a good proxy for U.S. stocks – is up about 27%, while ETH is up over 3000%. While that could make some investor’s mouths water, it’s also a tell-tale sign of a volatile and over-extended asset. And that means proceed with caution.

While most investors could buy some Ethereum (ETH) today and not regret it, if you do so, buy lightly: No more than 1% to 2% of your portfolio. Like many stocks that are new in an exciting but nascent investment space, ETH is volatile and risky. While the case is strong for more upside, you can lose a ton as well. So, be cautious.
Next time, we’ll take a new look at a cryptocurrency that isn’t on most people’s radars. So, stay tuned!

Disclosure: This contributor does own Bitcoin. This article is the opinion of the contributor themselves. The above is a matter of opinion provided for general information purposes only and is not intended as investment advice. This contributor is not receiving compensation (other than from INO.com) for their opinion.