International Business Machines (IBM) is fresh off its strong quarterly results with growth returning to the narrative. IBM continues its slow and long turn back to growth, focusing on high-value faster-growing business segments while embracing the future of technology with artificial intelligence, blockchain, and hybrid cloud architecture via the Red Hat acquisition. Over the past few years, IBM has taken a blended approach of M&A, realigning its business mix to current and future trends, maintaining its dividend payout, and continuing to buy back shares while absorbing its Red Hat acquisition.

IBM’s executive leadership has set the growth and value narrative. Investors quickly realize the value Red Hat brings to the table while washing away fears that IBM overpaid for the $34 billion acquisition. IBM has been in a position of strength and has broken out past $140 after its recent quarterly earnings. Long-term imperatives are beginning to bear fruit in emerging high-value segments that have fundamentally changed its business mix while evolving its offerings to align with new-age information technology demands. The Red Hat acquisition will augment its transition away from its dependency on legacy businesses to the future of hybrid cloud, blockchain, artificial intelligence, and analytics. 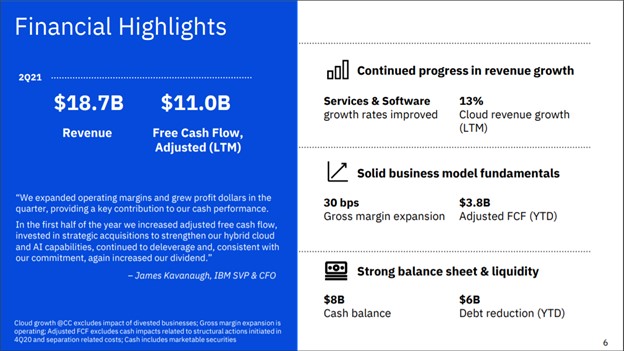 IBM acquired Red Hat for $34 billion, and investors are beginning to realize the added value this property brings to the table. Most notably, this has accelerated IBM's revenue growth, gross margin, and free cash flow. This growth accelerator is a much-needed boost to the company’s stagnant growth over the past few years and will drive IBM further into the future of the cloud and where businesses are mitigating from an enterprise perspective. Red Hat is the world’s leading provider of open-cloud solutions and the emerging leader in the platform for hybrid-cloud and multi-cloud. IBM is attempting to reset the cloud landscape via its acquisition of Red Hat and, in the process, will become the undisputed number one leader in hybrid cloud, which is an emerging $1 trillion market.

Red Hat brings 90% penetration in the Fortune 500, and they are now one of the key foundational technologies of the hybrid cloud. As clients transition to hybrid and multi-cloud, Red Hat can leverage its large installed base and open architecture, which has emerged as one of the key foundational technologies for hybrid cloud computing. All of this feeds into analytics, data, and AI since all that combined data across these environments needs to be delivered in a secured manner.

A potential growth driver for future revenue growth lies in blockchain. I think IBM has a new frontier of growth in the nascent blockchain technology as the company is a first-mover in this promising, emerging technology. IBM’s enterprise blockchain solutions will be a substantial growth engine for the company as more companies adopt this technology. Blockchain has the potential to penetrate the $2 trillion in global payments and $1.8 trillion global supply chain. Recently, healthcare has come into the equation as another huge addressable market. IBM has partnered with CVS Health's Aetna and other insurers on a blockchain network to cut healthcare industry costs. The companies will use the network for processing claims and payments and for maintaining a directory. Anthem, Health Care Services, and PNC Bank are also involved with the project.

IBM is offering the first enterprise-grade blockchain platform for permissioned networks and is aggressively stepping into the enterprise blockchain solutions space. Any company looking to employ blockchain technology will likely leverage a company like IBM for the blockchain infrastructure as it’s a first-mover in the space, and Juniper Research ranked IBM as the top blockchain company in the world with more than 40% of surveyed tech executives and leaders ranking IBM as their preferred blockchain service provider. IBM is well-positioned as it is the #1 enterprise blockchain partner with greater than 400 projects with world-renowned companies across many different sectors involving transactions such as Dow, Walmart, HSBC, Nestle, and Visa.

Partners in the food industry are Nestlé, Unilever, and Kroger. In global shipping, IBM is working with Maersk, Dow Chemical, and DuPont. IBM’s blockchain is seeing inroads in the finance industry as well, with Societe Generale, HSBC, WeTrade, Unicredit, and Santander being top partners. IBM is also working with payment providers like VISA, BBVA, CIBC, EarthPort, and Polynesian payments platform KlickEx.

The IBM Food Trust Solution, which Walmart helped develop, makes the food supply process more transparent and traceable in the event of an illness outbreak. Prior to the blockchain technology adoption, it took roughly a week to trace the source of food, and blockchain reduces the time to a matter of seconds, mitigating the risk of tainted food reaching consumers. Albertson’s recently joined IBM’s food safety network as well.

International Business Machines (IBM) posted better than expected earnings, and IBM is continuing to slowly realign itself for future growth with new and emerging end markets while making acquisitions for future growth with a hybrid cloud focus. IBM is attempting to reset the cloud landscape via its acquisition of Red Hat and, in the process, will become the undisputed number one leader in hybrid cloud, which is an addressable $1 trillion market. Red Hat has accelerated IBM’s top-line revenue growth and its business shift to higher-value with margins expanding and free cash flow generation. Additionally, blockchain technology will become a revenue driver as IBM is a first mover in this promising, emerging technology with partnerships across all industries and, recently, healthcare.

Investors are pleased with the blended approach of M&A, realigning its business mix to current and future trends while maintaining its dividend payout. IBM's executive leadership has set the growth and value narrative, and investors are quickly realizing the value that Red Hat brings to the table while washing away fears that IBM overpaid for the $34 billion acquisition. Long-term imperatives are beginning to bear fruit in emerging high-value segments that have fundamentally changed its business mix while evolving its offerings to align with new-age information technology demands. IBM is transitioning away from its dependency on legacy businesses to the future of hybrid cloud, artificial intelligence, and analytics.