When I told you about the jaw-dropping news that came out of Deloitte's 2021 Global Blockchain Survey, I didn't think another report from a financial powerhouse would be so earth-shattering.

In Bank of America's Digital Assets Primer: Only the first inning, there were so many cryptocurrency and blockchain bombshells that they made my head swim.

So today, I'm going to break down four of the most important of them. And I'll tell you why each one is potentially game-changing for each and every one of us.

Bombshell #1: Crypto is “Too Large to Ignore”

The report doesn't pull any punches and opens with this salvo:

The "digital universe is too large to ignore."

While for most of us who have been around the blockchain universe for a while - and understand its almost limitless potential - this statement is like singing to the choir: It's nothing new - we've known about these amazing facts for years.

But for a behemoth investment bank to finally wake up and see the potential of crypto is huge. It brings credibility to the space that it didn't have before. And it's a significant shift in the already rapid pace of adoption, more on this in a moment.

And Bank of America doesn't stop there. It goes on to say that "crypto-based digital assets could form an entirely new asset class." 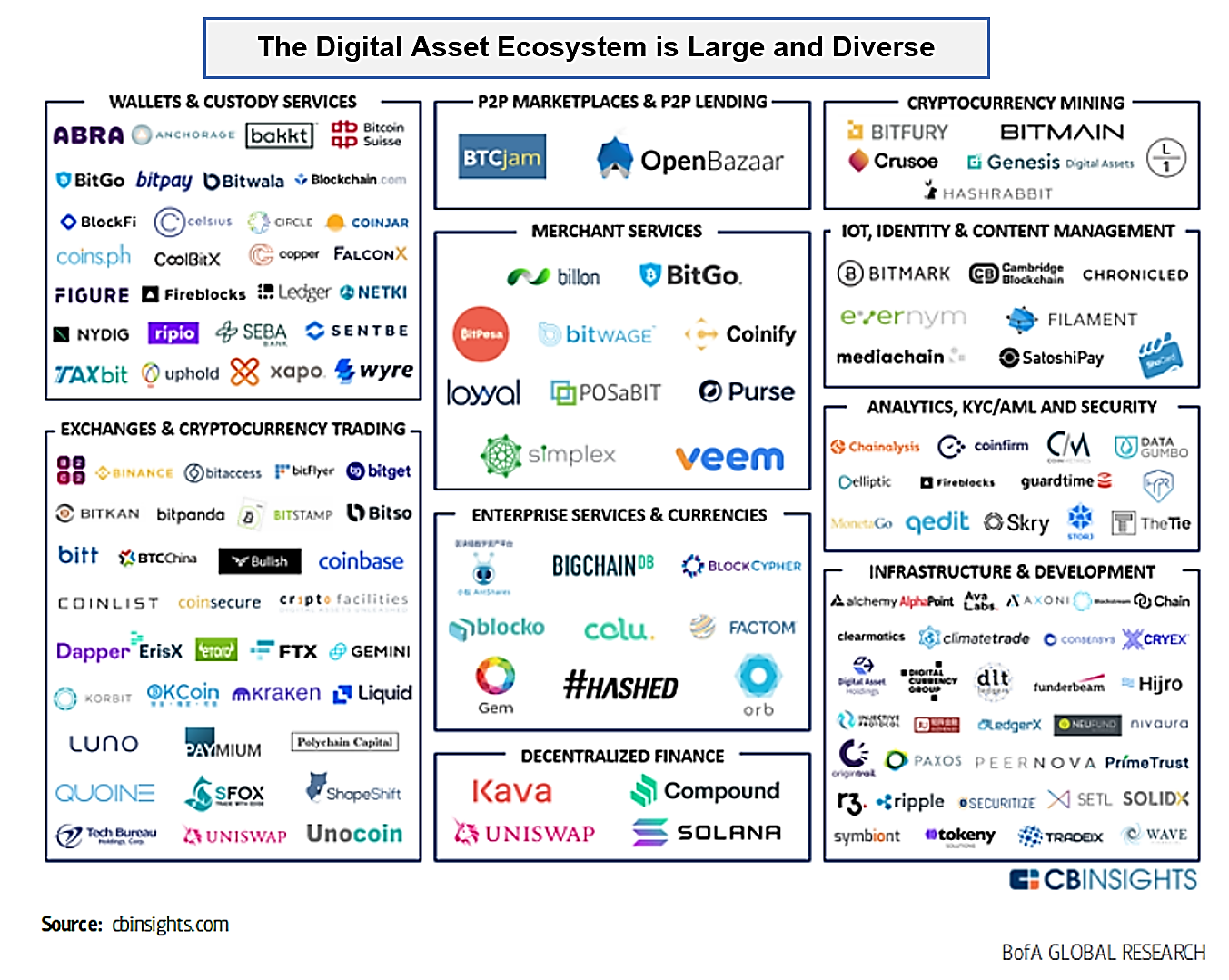 And if you think that this report is just going to tell us how great Bitcoin is, think again: While it gives the requisite nod to the biggest crypto out there, the report realizes that cryptocurrency and blockchain are so much more than Bitcoin:

"Bitcoin is important with a market value of ~$900bn, but the digital asset ecosystem is so much more: tokens that act like operating systems, decentralized applications (DApps) without middlemen, stablecoins pegged to fiat currencies, central bank digital currencies (CBDCs) to replace national currencies, and non-fungible tokens (NFTs) enabling connections between creators and fans."

The outlook for platforms that can do more than simply exchange or hold value - like Bitcoin does - is really where the action is. The transformative power of these platforms - most notably Ethereum - is unparalleled. From finance to real estate to complex business operations, smart contract platforms are revolutionizing what we do and the way we do it. If you can put it into code, you can do business with it on the blockchain.

But the fact is it's nice to see that the Bank of America report backs up what we've said, and then some. See for yourself:

"Ethereum created a generalized platform powered by smart contracts, enabling the development of hundreds of applications that could transform finance, insurance, legal, real estate, and many other industries."

And Bank of America doesn't stop there. Here's what comes next:

"Our view is that there could be more opportunity than skeptics expect. In the near future, you may use blockchain technology to unlock your phone; buy a stock, house, or fraction of a Ferrari; receive a dividend; borrow, loan or save money; or even pay for gas or pizza."

And the report also gives a nod to one of the most important aspects of blockchain and its DeFi (Decentralized Finance) opportunities: With blockchain, millions of people around the world that can't access traditional financial services will now be able to do so. And that means that the prosperity that comes from access to capital and means of exchange could potentially improve the lives of millions who've been excluded from the game:

"Decentralized Finance (DeFi) is an ecosystem that allows users to utilize financial products and services, such as lending, borrowing, insurance, and trading, without relying on a traditional financial institution. DApps may bring financial services to many of the 1.7bn unbanked globally through a simple smartphone app."

One of the great features of cryptocurrency and blockchain is that there isn't a central authority hanging around telling you what you can do and how to conduct your business. That's accomplished by a peer-to-peer network without the need for a middleman. Plus, there isn't a central authority making sure all your transactions are safe. Instead, that's done through distributed ledger technology, cryptography, and a vast array of computers, making sure everything is okay.

But that doesn't mean that regulation isn't part of the picture: It's been pretty clear from the beginning that a regulatory framework in the U.S. – and potentially around the globe -- is inevitable.

"Regulatory uncertainty is the largest near-term risk in our view, but regulation may drive increased investor participation over the long term once the "rules of the road" for digital assets are established."

From an investment standpoint, to say that the Bank of American report is bullish on crypto and blockchain would be an understatement: The bank has some of the most positive words I've seen in a long time:

"Despite potential regulatory headwinds (maybe tailwinds ultimately), we are bullish on the long-term prospects for the digital asset ecosystem as it enters the mainstream."

They also confirm that the use cases for blockchain are endless. And those use cases are breeding a wave of business and technology innovation unlike anything before:

And finally, the report declares a prolific outlook for the sector:

"It's difficult to overstate how transformative blockchain technology, digital assets, and the thousands of decentralized apps that have yet to be created could potentially be. We expect rapid changes to the current market structure - new use cases will be discovered, and others will be discarded."

Bank of America confirms many of the bullish factors surrounding cryptocurrency and blockchain. And when an investment bank covers a sector like this, it elevates the investment potential of the sector, adds credibility, and opens the sector to millions of potential customers. That kind of power can't be underestimated.

And mark my words: Bank of America won't be the last investment bank to begin coverage of crypto. You'll likely see just about every big brokerage and investment bank begin to take the sector seriously, especially as adoption continues to rise.

But don't forget: More coverage by Wall Street won't make the sector's volatility vanish. It's still going to be hammered by uncertainty and wide price swings. That's why it's a good idea to keep your allocation to no more than 1% to 2% of your portfolio.