Based on the trading action yesterday, it appears that traders have moved into a schizophrenic mode as Tuesday's gains were reversed quickly at the open on Wednesday.

At issue is the simple fact that no one really knows what to expect in terms of the duration of the government shutdown. And, the bottom line is markets hate uncertainty.

At least part of Tuesday's advance was based on the idea that the government shutdowns since 1980 have not produced large sell-offs in the stock market  While the algorithms have been trained to react at the speed of light to any and all headlines coming out of Washington D.C., reports made the rounds yesterday that historically, stocks have managed to advance the vast majority of the time (ten out of eleven occurrences) in the two weeks following a government shutdown. END_OF_DOCUMENT_TOKEN_TO_BE_REPLACED

We have had a very good run in the stock of Netflix (NASDAQ:NFLX) and the question now is, has Netflix topped out?

There is increasing evidence that Netflix is having problems over the $300-$310 area. With a lower close in this stock today, it will confirm that it has put in an intermediate top.

Yesterday, Netflix (NASDAQ:NFLX) put in a Japanese candlestick pattern known as "a dark cloud cover." This is confirmed as a top if the market closes lower today, September 17th. Candlestick patterns can be very powerful. This is not to say that Netflix has put in an all-time top, but rather in the interim the market has stopped going up and is probably going to see a pullback. 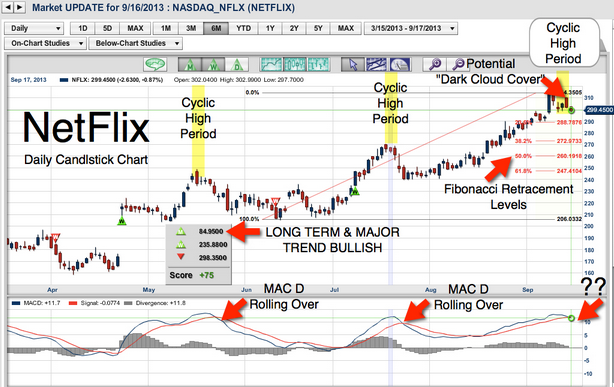 Pullbacks are always interesting and I like to use our Fibonacci retracement tool to measure them. In 2013, most of the pullbacks were in $30-$40 range. Measuring from the recent high of $314.18 on September 11th and subtracting $40, takes us down to $274 area. Coincidentally this is very close to a 50% Fibonacci retracement if we measure from the recent high on September 11th to the low seen on July 25th at $239.91.

I have two other concerns with Netflix (NASDAQ:NFLX). We are at a cyclic high and the MACD is beginning to roll over, which is similar to what happened in the May and July periods.

Please be aware I am not recommending shorting Netflix, as the longer-term trend for Netflix remains positive and I can see this market doing well longer term as it dominates the space of streaming video and home entertainment.

Let's watch today's close in Netflix very carefully. A close below the $301.13 level will represent a new 5-day low close for this stock.

This is just a heads up that Netflix may be running into some headwinds and profit taking.

Please feel free to leave a comment or your own view on the stock.

Today’s invited guest blogger is Denis Bouchard from Taiwan. Please check out his long-term historic viewpoint on Fibonacci waves and how he comes to view today's market. Feel free to comment  on this blog.

It has been several years since Elliott Wave Insights, Part III was published. With the major markets near the cusp of a directional change, the present is a very appropriate time to take several steps back and consider the overall picture of the wave pattern. A bird's eye view of Elliott Waves from the beginning of human history may give us insights as to what lies ahead.

END_OF_DOCUMENT_TOKEN_TO_BE_REPLACED

Everything in nature moves in cycles. . . the cycles of the seasons … night and day… tides… phases of the moon. Each year animals hibernate… geese migrate… salmon swim upstream to spawn… and every seven years lemmings run into the ocean.

While nature’s cycles are very visible, there are many cycles in the futures markets that are not quite as obvious. Often the reason some cycles are not easily seen is because the interaction of many large and small cycles makes individual cycles harder to see.

Cycles are the tendency for events to repeat themselves at more or less uniform intervals. One of the easiest cycles to see and understand is the seasonal cycle. Agricultural commodities have a repetitive annual price pattern called the seasonal price cycle. More than 70 of the time, the lowest cash prices of the year for corn, cotton and soybeans occur during the fall harvest period. Due to increased marketings, cattle and hogs also have price weakness during the fall. Wheat and oats tend to make seasonal lows during their summer harvest. Seasonal price trends are a reflection of regular annual changes in supply and demand factors caused by weather, production and demand.

W.D. Gann was a trader in the early 1900s who devised a unique and complex trading method that parallels some of these other theories. His technique is sometimes referred to as geometric because of his use of the mathematical properties of certain geometric figures and angles to predict price behavior. Gann had a cyclic view of market behavior and placed enormous emphasis on proportional relationships between price and time. He believed market events occurred at intervals that could be determined mathematically. And like Elliott, he believed the relationships he “discovered” reflected the natural law of the universe.

Gann calculated price retracements on percentages derived from dividing price action into eights, i.e. 2/8 = 25%, 4/8 – 50%, etc. He also included the Dow and Fibonacci retracements of 1/3 (33%) and 2/3 (67%) in his list of key percentages. He constructed support and resistance lines (Gann lines) based on varying ratios of time units to price units. His most important trend line, plotted at 45 degrees (up from a market bottom or down from a market top) represents one unit of time movement per one unit of price movement.

He also placed lines with other time/price ratios, like 1:2, 2:1, 1:3. 3:1, etc. The angle of these lines corresponds to the strength and speed of a trend. As long as pries stay above (or below, depending on the direction of the trend) the 45-degree line, the trend will continue. Once prices break that line, they will theoretically proceed to the next line of resistance, 1:2 or 1:3, for example, as the trend is played out.

Gann determined “anniversary dates” for timing market events based on the degrees of a circle (30, 60, 90, 180, 360 days) as well as periods of 12 months and 144 days (144 is the only square Fibonacci number). For example, when a market made a high or low, Gann looked for another significant price milestone 144 days or a year in the future.

He also predicted future support and resistance points using “cardinal squares.” Starting with a low price for a contract, he spiraled prices clockwise around it on a grid until the prices reached the current trading range. Prices that fell on the “cardinal cross,” the perpendicular lines equivalent to the X and Y axes of a graph, represented probable levels of future support and resistance.

Gann techniques are most effective when used together. Instances in which a trend reversal corresponds to a previously calculated retracement ratio, a cardinal square price, an anniversary date and the breaking of a trend line would represent important market cycles.

You can learn more about the Gann Theory by visiting INO TV.