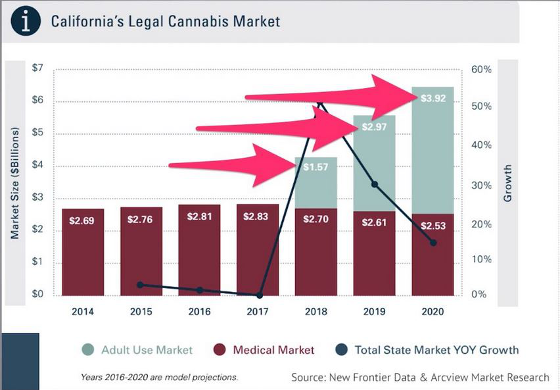 END_OF_DOCUMENT_TOKEN_TO_BE_REPLACED

If anyone thought investing in weed stock was going to be easy, this week was a reality check.

Cannabis stocks collided with two obstacles in the last week.

The first, four of the largest Canadian medical marijuana stocks were temporarily halted because of high levels of volatility.

For example, last Wednesday Canopy Growth Corp (CGC) was surging into a new all-time high above $17 – up more than 20% on the day.

While that was great news for shareholders, it set off the Toronto Stock Exchanges (TSE) circuit breaker. Shares were temporarily halted so the exchange engines wouldn’t melt down like a hunk of warm cheese.

The trading halts only lasted a few minutes at a time.

However, damage was inflicted. END_OF_DOCUMENT_TOKEN_TO_BE_REPLACED

It’s been a tale of two markets for cannabis stocks.

For example, industry leader Terra Tech (TRTC) is down 18% in the last five days. Kush Bottles (KSHB) is down 35%.

On the other, Canadian cannabis stocks have been killing it.

This has a lot of cannabis investors scratching their heads.

After all, didn’t the U.S. market just see a big wave of legalization? END_OF_DOCUMENT_TOKEN_TO_BE_REPLACED