The Energy Information Administration released its Annual Energy Outlook for 2019, and what a difference a year has made. Due to shale oil’s production response in 2018, EIA’s outlook through 2025 shows supplies surging. 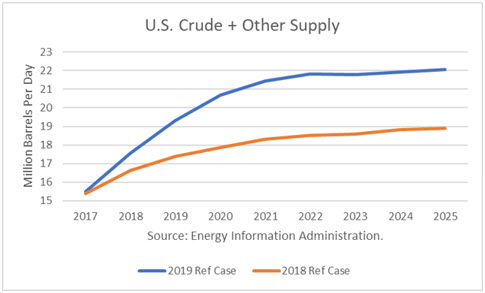 The production forecast includes both crude oil and “other supply,” which will be explained in greater detail below. Often, U.S. production is generally limited to crude oil, but other liquids included in petroleum supply, have become a major component and are expected to rise even faster than crude alone.

Total liquids are projected to rise from 17.5 million barrels per day (mmbd) in 2018 to 22 mmbd in 2025 in EIA’s reference (base) case. In its high price scenario, EIA projects 2025 volume could be 26.4 mmbd. By comparison, Russia is producing just over 12 mmbd and Saudi Arabia just over 10 mmbd with its recent cutback. And so US output could be roughly the number two and three highest country volumes combined. END_OF_DOCUMENT_TOKEN_TO_BE_REPLACED