“I said but Russia is not our friend. We treat them accordingly. We are aware of their END_OF_DOCUMENT_TOKEN_TO_BE_REPLACED 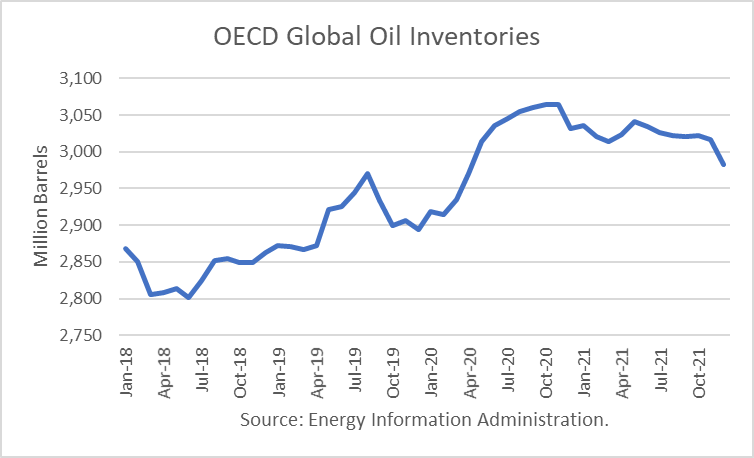 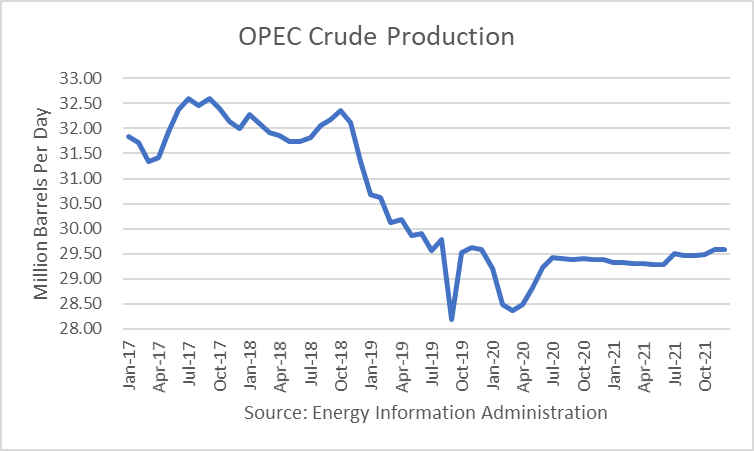 I updated my linear regression between OECD oil inventories and WTI crude oil prices for the period 2010 through 2019. As expected, there are periods where the price deviates greatly from the regression model. But overall, the model provides a reasonably high r-square result of 79 percent. END_OF_DOCUMENT_TOKEN_TO_BE_REPLACED

Phillips 66 Partner’s Gray Oak pipeline is expected to ship an additional 900,000 b/d in the Permian. It began shipments and is expected to be in full service by the end of the second quarter of 2020. 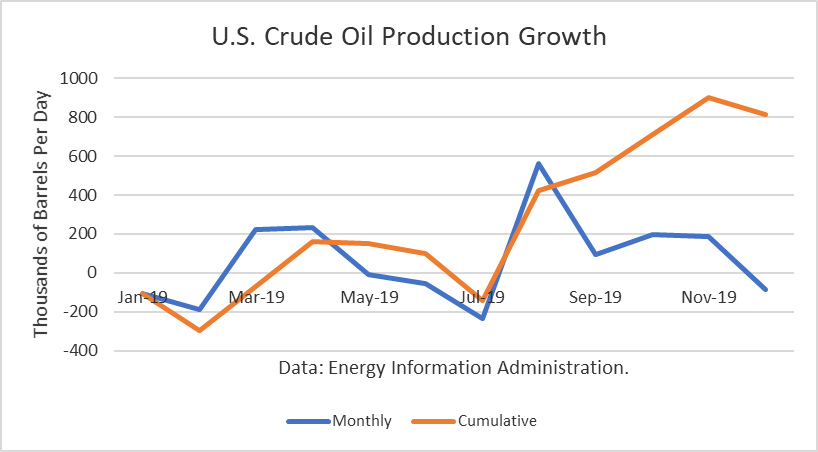 The gains from last December have amounted 816,000 b/d. And this number only includes crude oil. Other supplies (liquids) that are part of the petroleum supply add to that. For December, that additional gain is about 700,000 b/d. END_OF_DOCUMENT_TOKEN_TO_BE_REPLACED

Citi is the latest to revise its estimates of the demand destruction from COVID-19. It said that it now believes inventories of crude oil could grow to 2 million barrels per day in February alone, which would put “even more sustained pressure on prices.” A week ago, the firm’s thought the potential build would be over one million barrels per day for the quarter.

Numerous sources have estimated China’s demand for crude had dropped between two and three million barrels per day since petroleum product consumption had dropped, and the profitability of running refineries had plummeted. But Goldman Sachs (GS) subsequently revised its estimate last week, that they now expect “a cumulative global stock build of 180 million barrels in 1H20, four times its pre-virus forecast.”

The Goldman forecast is based in part on an estimated hit in China’s crude oil demand of 4 million barrels per day. Goldman assumes that OPEC+ will deepen its cuts in 2Q by about 500,000 b/d.

OPEC’s Joint Technical Committee (“JTC”) met from February 4 to 6th and recommended “a further adjustment in production until the end of the second quarter of 2020” and “extending the current production adjustments until the end of 2020.” The cut would be an additional 600,000 b/d on top of the cuts announced in December.

The Energy Information Administration reported that November crude oil production averaged 12.879 million barrels per day (mmbd), up 203,000 b/d from October. In addition, the October estimate was revised 21,000 b/d higher, and so the total gain was 224,000 b/d from the prior estimate. 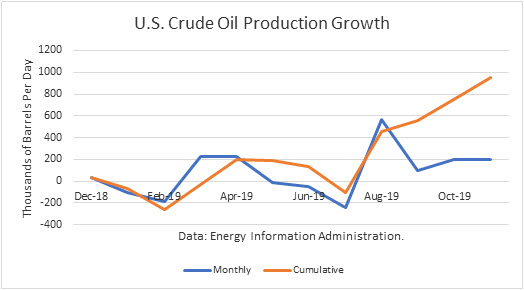 The gains from last December have amounted 953,000 b/d. And this number only includes crude oil. Other supplies (liquids) that are part of the petroleum supply add to that. For November, that additional gain is about 500,000 b/d. END_OF_DOCUMENT_TOKEN_TO_BE_REPLACED