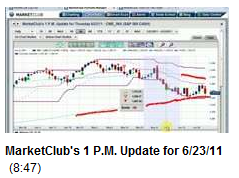 Hello traders everywhere. Adam Hewison here, co-founder of MarketClub, with your 1 p.m. market update for Thursday the 23rd of June.

Choppy, choppy, markets. Today's action should be viewed as a test of the lower range in the S&P 500. This market is very close to breaking the 200 day moving average. Many traders consider this to be one of the most important long-term technical indicators for the equity markets. The exception to this is the NASDAQ that is already below the 200 day moving average and looks like we're going to see further downside action. The other big news was the sharp drop in precious metals. We were warning about this in our commentary yesterday as gold was grudgingly going up and up, popping above the upper levels of the Donchian channel. The release of 30 million barrels of crude oil will last about a day and a half in the US. This action can only be viewed in my mind as a desperate measure to win popularity for the current administration. I have seen many times in the past that when governments get involved in the markets, they never come out ahead. As we said in yesterday's video, a low risk entry point for short term traders should be around $90.07 at the bottom end of the Donchian channel.

Now let's take a look at the markets...

Silver: -70. This market is heading for a test of the lower levels of the Donchian trading channel.

Gold: +55 and exit signal at $1,532.73 was given today for short term traders only. For intermediate term traders gold is still in a bull market. Major support at $1,513.

Crude Oil: -100 with the announcement of the release of 30 million barrels of crude oil this market promptly fell to the lower levels of support and where we wanted to buy for a trading turn around the $90.07 level which represents a 61.8% Fibonacci retracement.

The Dollar Index: -65. Our indicators are still negative longer-term for this index. Minor support at $74.50. Resistance at $76.00. Look for a possible test of the upper line of the Donchian channel.

The Thomson Reuters/Jefferies CRB Commodity Index: -100. We are at the lower range of the Donchian channel and the market is oversold. We would not rule out some sort of bounce from current levels. Market is in a downtrend and moved out of the Donchian Channel on the surprise crude oil announcement out of the White House.

12 thoughts on “Barrel of Monkeys?”