Wal-Mart Stores Inc. (NYSE:WMT) is the largest retailer in the world, and if they are have problems, then we really have to examine and be concerned about what is really happening to the economy.

Yesterday, it was reported that Wal-Mart stores were cutting back on U.S. orders amid an inventory backlog. It was later denied by David Tovar a spokesperson for Wal-Mart. However, true or false it managed to push the stock of Wal-Mart down over 2% on the day.

That is a fundamental viewpoint. What is interesting technically about Wal-Mart is the fact that it recently broke below a 25 month trend line.Trend lines are enormously important for determining the momentum and trends of stocks, commodities, and any number of items that can be charted. In order to be a valid trend line, it must touch three points along the line to be truly meaningful. The longer the time frame, the more meaningful and powerful the trend line becomes. A two year trend line like Wal-Mart recently broke thru to the downside is significant and should not be ignored. 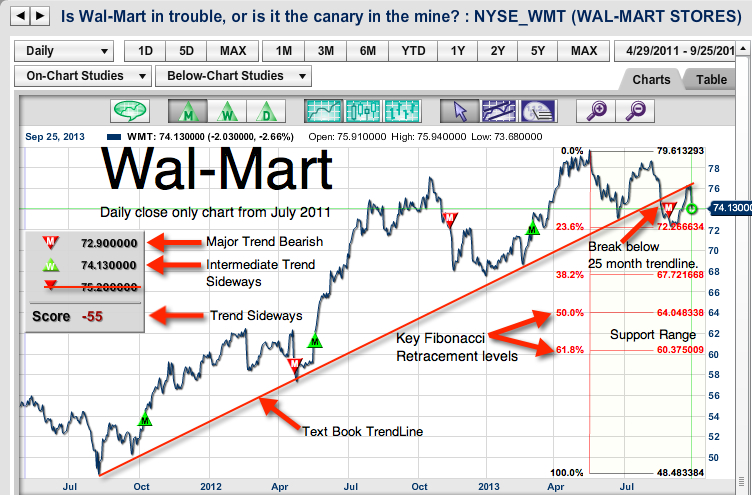 When you look at today's chart of Wal-Mart, you can clearly see where this stock fell below its long-term support trend line. This was a game changer in my book, as Wal-Mart has for the past couple of years trended higher. The break below the trend line signals to me that the momentum has changed, and we may see Wal-Mart under pressure in the months ahead. That pressure may be because of slower sales, the reduction in food stamp spending that Wal-Mart is a huge beneficiary of, or just the market itself not wanting to own the stock of Wal-Mart Stores Inc. (NYSE:WMT)

Looking at the chart of Wal-Mart it appears to be rolling over and moving sideways right now, I could see Wal-Mart trading down to the Fibonacci levels of $62-$63.

Should Wal-Mart move and close below $72, it will signal a slow and steady erosion for this stock. The next logical support for this stock would be around the $67.72 level which is another Fibonacci retracement level, measured from the high seen last May.

Wal-Mart Stores Inc.(NYSE:WMT) may in fact be the canary in the mine, as it's signaling, an even slower economy for the balance of the 2013 and 2014.

5 thoughts on “Is Wal-Mart in trouble?”