The broader indices have been highly volatile recently due to weakness in China, an imminent Federal Reserve rate hike and persistently low oil prices. Navigating these volatile markets can be difficult. I posit that via investing in high-quality companies that offer the combination of high-quality dividends along with share buybacks may position an investor to contend with this volatility while potentially being rewarded handsomely during bull markets. On the front half of this dual synergy is the dividend space. This space offers many quality attributes such as decreased volatility, healthy yields, moderate risk exposure and a hedge against downside risk thus may be an ideal synergy for any long portfolio. Historically, companies that have an established track record of not only paying dividends but growing their dividends over the long-term have generally outperformed their respective index with decreased volatility. On the back half of this synergy is share buybacks. Share buybacks can serve as an effective way to drive shareholder value via returning capital to shareholders by repurchasing its own stock.

At times, I'll be using both The Vanguard High Dividend Yield ETF (VYM) and The PowerShares Buyback Achievers ETF (PKW) as proxies for this analysis. I will also select specific high-quality companies to exemplify these attributes. The combination of VYM and PKW may present an ideal investing strategy in which to invest and potentially capitalize on a cohort of companies that engage in both dividends and aggressive share buyback programs, particularly in these volatile markets. This article caps off a three-part series focusing on navigating volatile markets while focusing on high-quality companies that pay out dividends and engage in aggressive share buybacks. This series is primarily focused on these attributes utilizing ETFs as proxies to exemplify the mitigation of downside risk while being well positioned in bull markets.

• The combination of dividends and share buybacks can serve as a very effective way to drive shareholder value via returning capital in the form of cash and repurchasing stock
• The dividend space offers many long attributes: decreased volatility, healthy yields, moderate risk and a hedge against downside market swings
• Since inception approximately 9 years prior, PKW has provided nearly triple the return of the S&P 500 and Dow Jones
• VYM has outperformed the S&P 500 in past two down markets in 2008 and 2011 by 5% and 8%, respectively
• Taken together, this dual synergy may be an ideal investing strategy in mitigating risk while being well positioned for bull markets

Conversely, as a consequence of its high-quality dividend paying centric portfolio, VYM has the majority of its holdings in more robust and financially stable companies that are the least impacted during economic turbulence domestically and abroad. This ETF specifically focuses on large-value companies within consumer defensive, healthcare and utilities. In terms of performance throughout bear markets, VYM has outperformed the S&P 500 in 2008 and 2011 by 4.9% and 8.4%, on an annualized basis respectively (Figure 2). This data exemplifies the risk mitigation that is commonly intrinsic throughout the large cohort of high-quality dividend paying stocks. 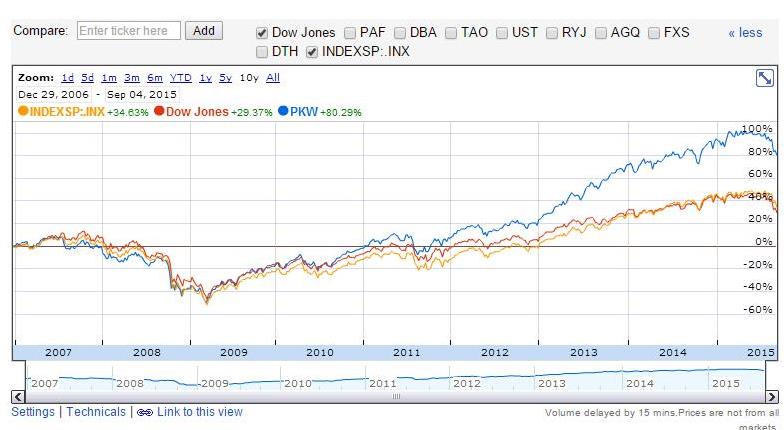 Figure 1 – Google Finance comparison of cumulative returns over the past 9 years for PKW, Dow Jones and S&P 500 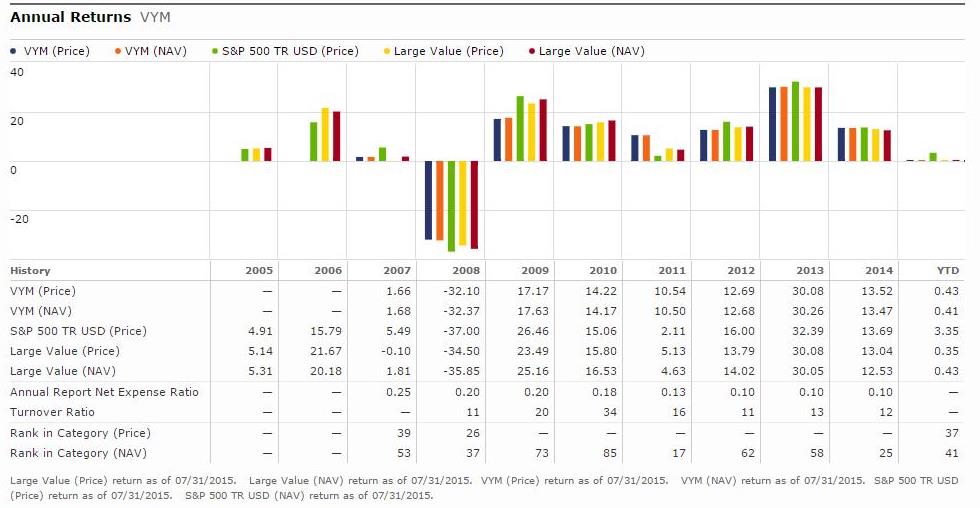 This datas suggest that returns are significantly greater than the border indices when specifically focused on the cohort of companies that deploy capital primarily in the form of share buybacks and secondarily in the form of dividends. Taken together this data suggests that the cohort of companies that specifically focus on share buybacks to drive shareholder value outperform the broader indices in bull markets while the dividend paying cohort may potentially mitigate downside risk in bear markets as demonstrated in 2008, 2011 and thus far in 2015.

Share buybacks can be an effective alternative to paying dividends however in some cases these programs are combined with dividend payouts. In this case, shareholders are doubly rewarded with capital returned in the form of share buybacks and a quarterly/semi-annual dividend distribution. Dividends coupled with share buybacks can serve as an effective synergy in returning value to shareholders; Apple and Home Depot are great examples of this dual capital return. PKW and VYM Holdings consist of numerous companies that offer both share buybacks and dividends for maximum appreciation (Figures 3 and 4). 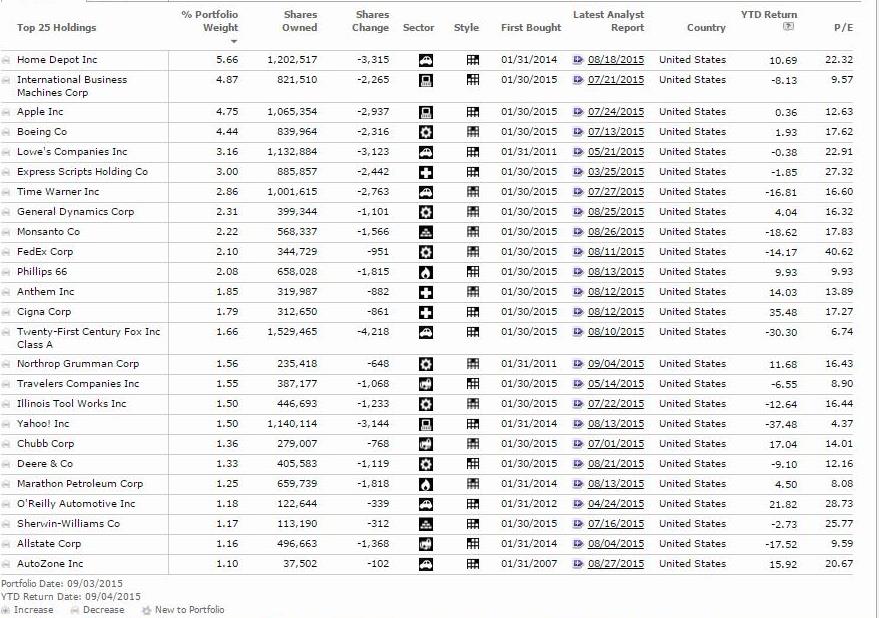 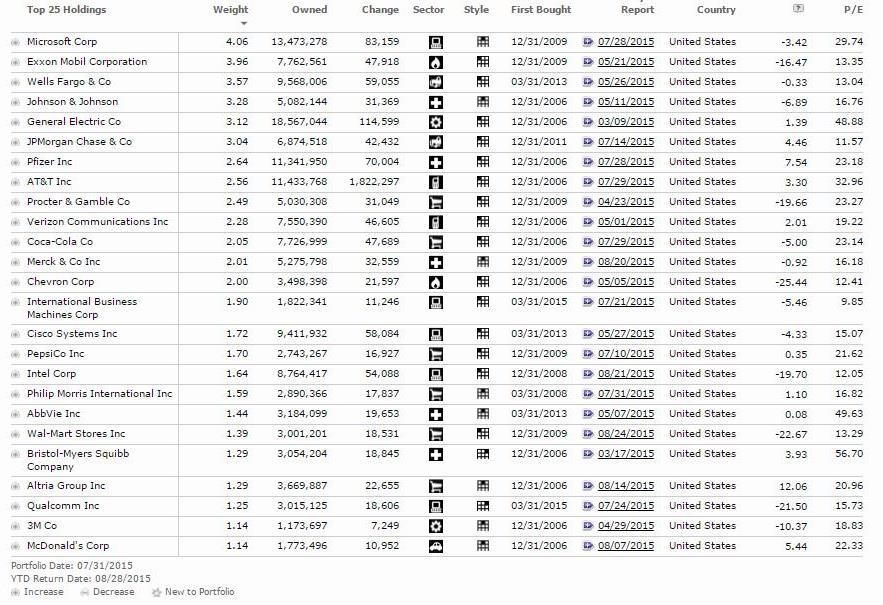 PKW and VYM hold stable large-cap stocks across all categories in growth, blend and value with strong cash positions for an overall category status of large value. Many companies within these portfolios provide the same share buybacks and dividend combination for optimal capital return such as Apple, Home Depot, Northrop Grumman, Microsoft, Boeing and Wells Fargo all of which pay a dividend with varying yields. Collectively, all the companies that comprise PKW translate into a current overall yield of 1.1% while VYM has a current overall yield of 3.2%. This provides a competitive base to augment the share buyback component of these ETFs.

In the face of volatile markets, I posit via investing in high-quality companies that offer the combination of high-quality dividends along with share buybacks may position an investor to contend with this volatility while potentially being rewarded handsomely in bull markets. Since inception approximately 9 years prior, PKW has provided nearly triple the return of the S&P 500 and Dow Jones on a cumulative basis. VYM has outperformed the S&P 500 in 2008 and 2011 by 4.9% and 8.4%, on an annualized basis, respectively. These data exemplify the risk mitigation that is commonly intrinsic throughout large cohort of high-quality dividend paying stocks. Many companies within the PKW and VYM portfolios provide the dual synergy of share buybacks coupled with dividend payouts for optimal capital return to shareholders. Considering the strong fundamentals and past performance with focusing on companies that return capital in the form of share buybacks and dividends, these ETFs present a compelling case to belong in any long portfolio.

Disclosure: The author currently holds shares of Apple, Home Depot and Wells Fargo. The author is long these holdings. The author has no business relationship with any companies mentioned in this article. He is not a professional financial advisor or tax professional. This article reflects his own opinions. This article is not intended to be a recommendation to buy or sell any stock or ETF mentioned. Kiedrowski is an individual investor who analyzes investment strategies and disseminates analyses. Kiedrowski encourages all investors to conduct their own research and due diligence prior to investing. Please feel free to comment and provide feedback, the author values all responses.