I dedicated my last post to China which is diversifying foreign reserves with large Gold purchases. This time, I want to share my thoughts about a reviving empire and the northern neighbor of China.

The Eurasian Economic Union (EEU) is the largest union on Earth by territory. It is so vast that on one side of it people try to survive in Arctic frost and on the opposite side one can enjoy a mild winter full of sunny days skiing in the high Kyrgyz mountains. The union ranks fifth by GDP (PPP) and seventh by population and it’s only the beginning. The member states are (in alphabetical order): Armenia, Belarus, Kazakhstan, Kyrgyzstan and Russia.

President Putin aimed to create a "powerful, supra-national union" capable of becoming a new pole of the modern world to form a bridge between Europe and Asia and rival the EU, the US, China, and India. Indeed, the union became the most truly functioning platform of integration after the dissolution of the Soviet Union.

Russia plans to restore its former Soviet empire, but doesn't admit it directly. It makes an accent on economic integration with a single border-less market avoiding political context. But we all know that politics is a concentrated expression of an economy and this trade bloc move surely steps towards unity on the sufferance of its people. The intensifying confrontation with the West, like during the Cold War times, speeds up the process as external "enemy" with sanctions makes people forget internal problems and unite.

The integration is in the second stage now with two new members (Armenia and Kyrgyzstan), first was the Customs Union. I think the next stage, which can take a longer time to execute, is the creation of a single country with a single currency, economy and army.

A Single Currency For A Single Country

This year the Kremlin was ordered to explore the creation of a single currency across the Eurasian Economic Union despite the fact that this question has been always denied by the heads of the member countries. For me, it was obvious that all the processes that are pushed by the political will of a powerful leader can't stop half way and the Customs Union of just three states was just the threshold of something bigger.

This fall the Russian government has concluded that it is still early for the introduction of a single currency due to the lack of synchronization of legislation and infrastructure. It could take longer, but it will be done as no single word about people's consent has been mentioned. 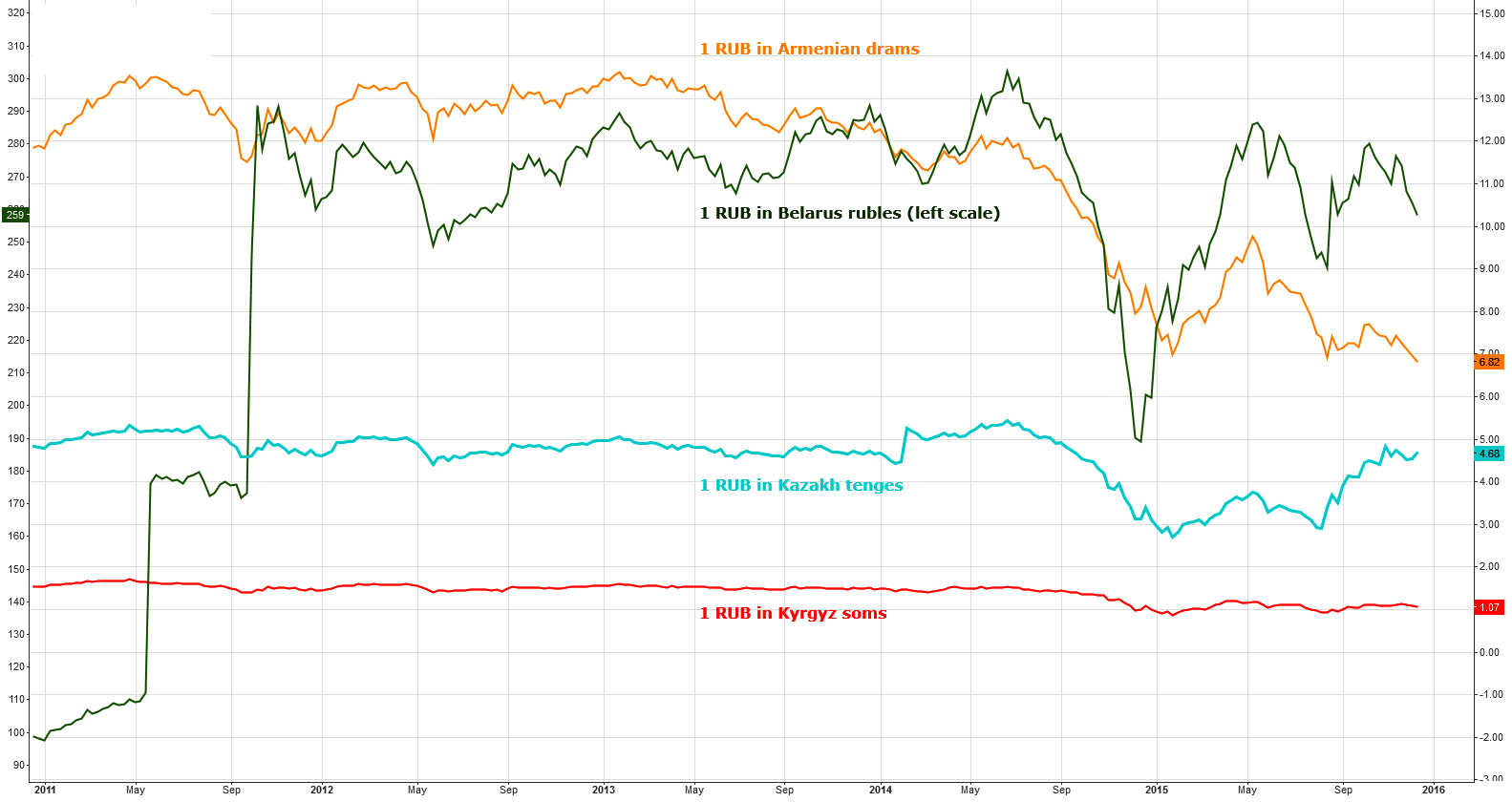 The euro is the most recent example of a single currency introduction. To launch it, the Europeans first pegged their local currencies by firm FX cross rates for a smooth transition.

I put this chart above to show that most of the local currencies in the EEU have already been pegged unofficially to the Russian Ruble (RUB). The most stable crosses are the Kazakh Tenge (KZT) and Kyrgyz Som (KGS) and this reflects the strength of the political support these countries have from Russia.

The RUB/KZT cross has been hovering around the 4.8 level (historical average) with sudden drops during severe devaluations of the RUB against the USD when the Tenge was protected by the Kazakh central bank interventions.

The RUB/BYR (Belarus Ruble, left scale) cross has rocketed 3 folds to the 300 level and in the last 4 years has been moving on its new orbit around the 270 level. The RUB/AMD (Armenian dram) is the only "black ship" cross that is making new lows as the speed of dram devaluation to the dollar is much slower than the ruble is.

The Russian Ruble is the leading currency at the bloc as it looks only after oil price, it is very liquid, it has a large offshore market and even futures on the CME, other local currencies just follow it.

I don't doubt single currency, but I still guess what will be the choice. Will it be the Russian ruble as the Russian economy is almost ten times larger than the second largest member Kazakhstan, or will it be earlier advertised new currency "Altyn" (means Gold)?

Another "Pole" Is Hungry For Gold 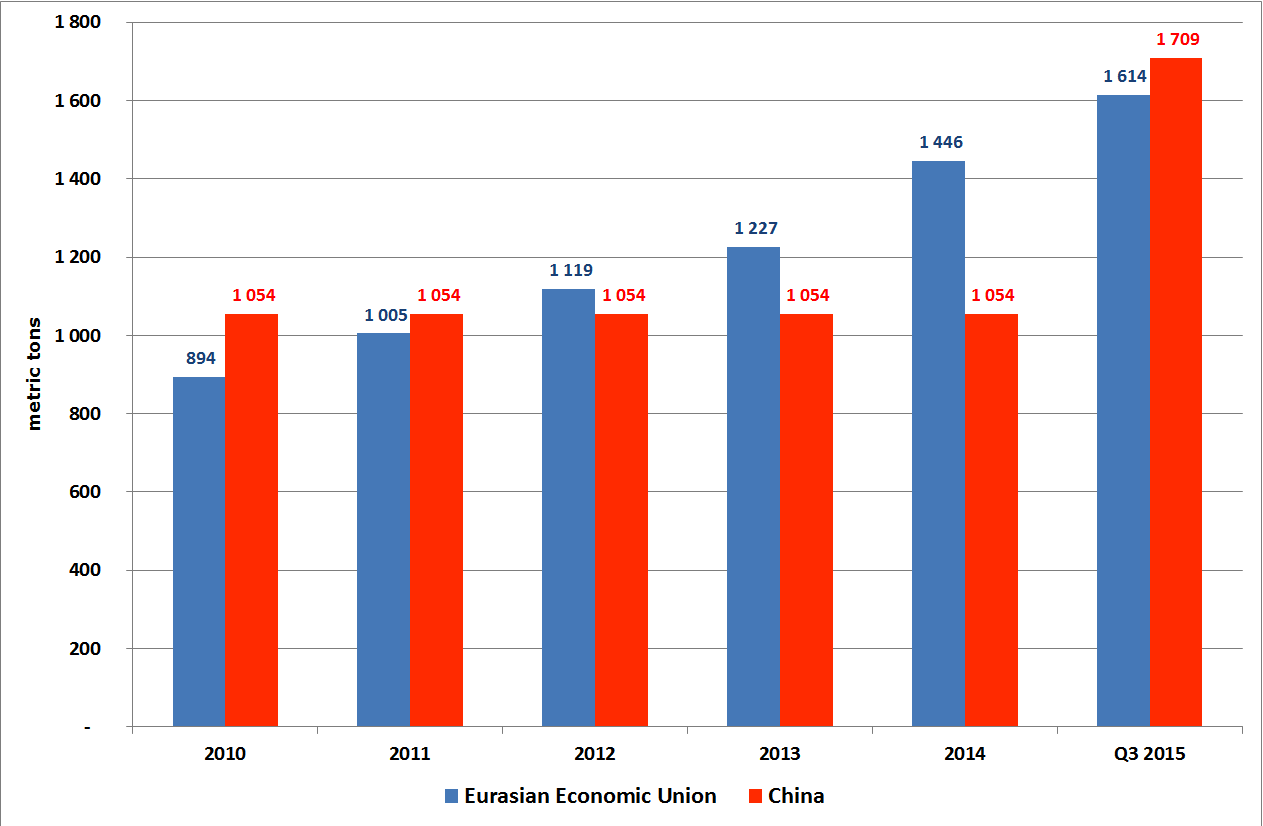 As you might have noticed, the world "pole" in my expression "new world pole" has been current recently. Today I put this diagram above to show how similar the track of Gold purchases is in those new poles.

You can see for yourself that both "Titans" are moving head to head in a Gold buying race. Back to my previous post about China I wrote that it kept in secrecy for six years its Gold holdings data, that is why the Chinese data trend is flat until the current year's number.

The union bought more than 700 metric tons of Gold in five years (mostly by Russia with z share of 84% and by Kazakhstan with a share of 13%) as China did almost the same, adding 655 metric tons to its holdings. The absolute figures are almost the same, but we should keep in mind, that the Chinese foreign reserves total amount of 3.4 trillion USD is the largest in the world and more than 8 times bigger than the EEU total reserves of 0.4 trillion USD. Therefore, the EEU foreign reserves are much more diversified than the Chinese.

It is obvious that both players are trying to get rid of US dollars. The Russian Federation (RF) is looking for more options to reduce its vulnerability to Western sanctions and achieve long-term growth and economic sovereignty. It has already launched its own national payment system “Mir” (translated as World). Russia plans to establish their own rating agency, launch a new orthodox model of "interest-free" banking (similar to Islamic) and start to sell its oil in rubles to compete with the petrodollar.

The RF pushes other EEU members to increase usage of local currencies in mutual trades and inside of the countries (property and car deals are priced and conducted in US dollars in most of EEU states except Russia). It is a hard task as severe devaluations on back of the falling oil price spurred the huge demand for dollars.

The Gold for the Eurasian Economic Union plays a more significant role as even the meaning of a proposed new single currency “Altyn” is Gold. The metal could be used as a heavy or the last argument to convict adoption of a single currency by the people and undermine the internal US dollar dominance. Such an insatiable demand for Gold keeps its price above triple digit numbers despite heavy downside pressure.