The National Oceanic and Atmospheric Administration's (NOAA) Climate Predict Center (CPC) is forecasting a continuation of a major heat wave this week ending July 30th. Nearly every single state is predicted to experience higher than normal temperatures. In some states, such as Washington and Oregon, cooling degree days (CDDs) are forecast to be more than double their normal levels. However, in the two states that burn the most natural gas at power plants, Texas and Florida, the heightened temperatures will be more muted.

Based on NOAA's state-by-state cooling degree day forecast, weighted by natural gas-weighted electricity production, I estimate that CDDs will be 30% higher than normal and 12% higher than in the same week last year. 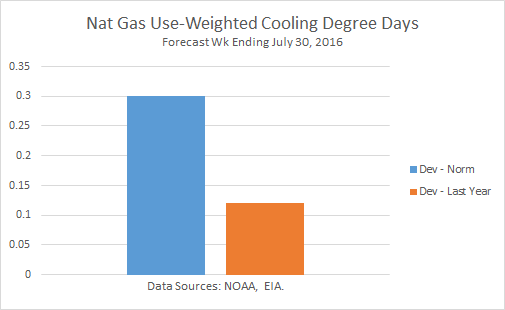 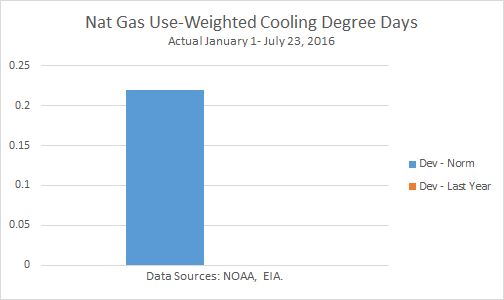 Last week, the Energy Information Administration (EIA) had reported storage at 2,806 billion cubic feet (bcf), up 16.8 % from a year ago, and 20.6% above the 5-year average. With the heat waves experienced last week and forecast for this week, the glut will be just around 12% v. a year ago. 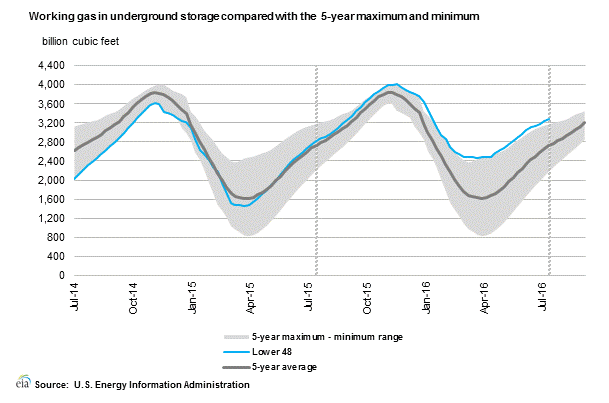 The National Oceanic and Atmospheric Administration (NOAA) provides ongoing assessments and forecasts of population-weight cooling degree days (CDDs). Degree days are based on the assumption that when the outside temperature is 65°F, we don't need heating or cooling to be comfortable.

Example: The high temperature for a particular day was 90°F and the low temperature was 66°F. The temperature mean for that day was:

Because the result is above 65°F:

The cooling degree season runs from January 1st through the end of December each year.

Cooling degree days affects natural gas use because it is a feedstock to electric utilities. Electricity powers air conditioners.

Over time, natural gas has been replacing coal as a feedstock to utilities. It follows that to understand how summer temperatures affect natural gas consumption, it is important to know where utilities are burning natural gas and how much.

NOAA produces a population-weighted CDD assessment and forecast for every state and combines them to create a U.S. total. I take this state-by-state CDD data and weight each state by its relative nat gas use at electric utilities. In that way, I get a more accurate picture of Natural Gas Use-weighted CDDs. 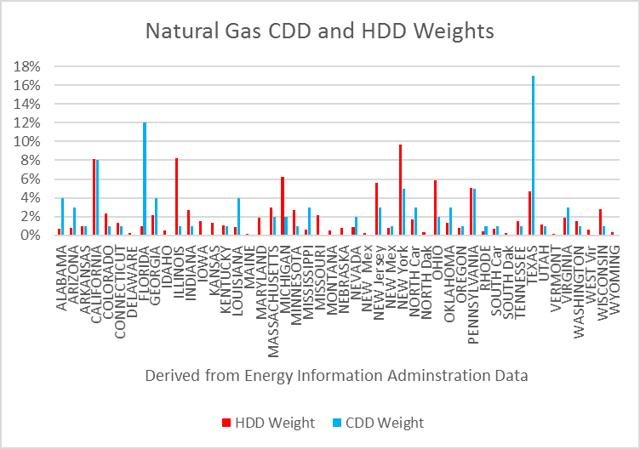 To prepare quantitative projections of future consumption, the first step is having a model that relates degree days to demand. In my model, I use three factors: heating degree days, cooling degree days, and GDP.

With just these three factors, I have a 97% multiple regression fit since 2012. This means these factors, each of which is highly statistically significant (as indicated by the T-statistics), explains 97% of the monthly variation in demand (see graph below). 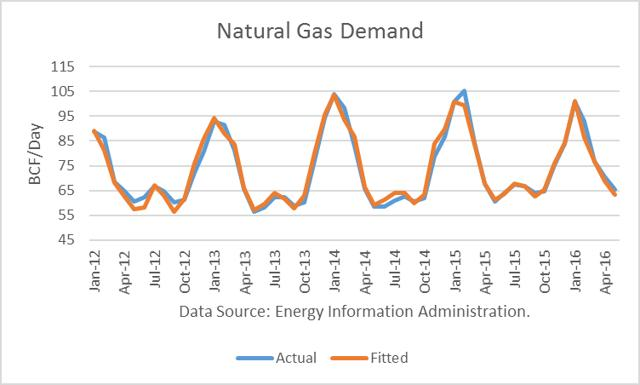