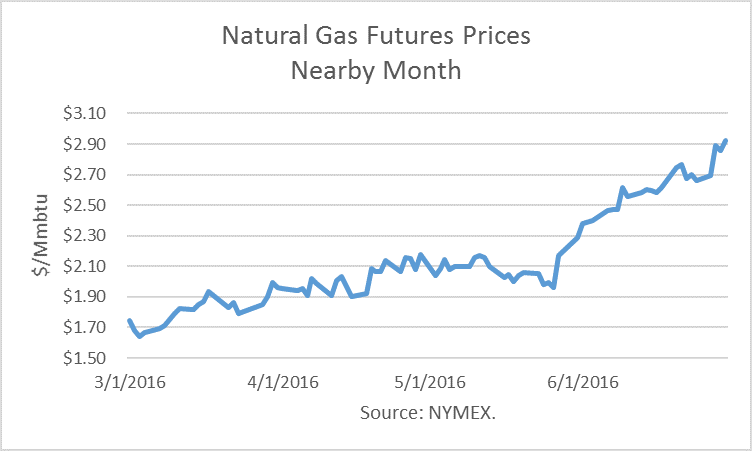 Natural gas futures prices have risen almost 80-percent from their lows in March, with much of the gain occurring over the past month. Based on my analysis of the Commitments of Traders (COT) reports, issued by the Commodity Futures Trading Commission (CFTC), the vast majority of the buying that propelled prices came from short speculators who covered (bought) to limit further losses. Since early March, they had purchased more than 100,000 futures and options contracts (see graph below). 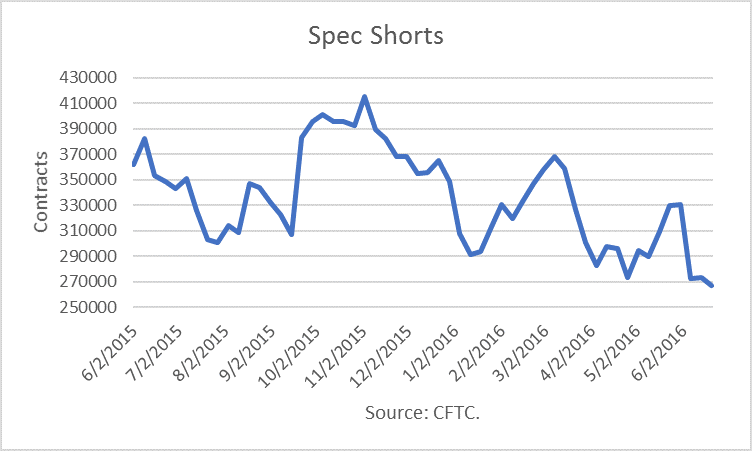 El Niño produced the warmest U.S. temperatures on record this past “winter.” 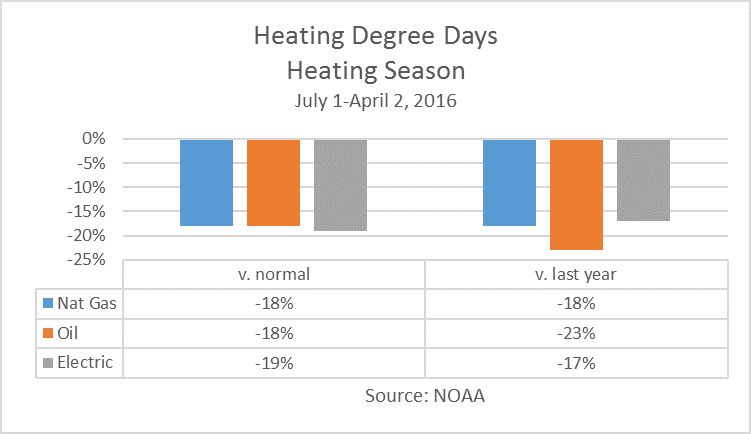 But temperatures soared in June in the Southern portion of the United States where air conditioning has been running at full-tilt. There has been a shift in fuel sources away from coal in favor of natural gas (i.e., about 33% each) as feedstock to electric plants which in turn provide the current to run a/c units.

The National Oceanic and Atmospheric Administration (NOAA) calculates a heat index—known as cooling degree days (CDDs)—to estimate electric utility loads, and the CDDs have been running far above average in June. Consequently, the Energy Information Administration (EIA) has been reporting lower-than-normal injections (builds) in natural gas storage over the past several weeks. As a result, the relative size of the glut has been decreasing each week.

According to NOAA, transition to El Nino Southern Oscillation (ENSO)-neutrality is likely to occur this summer, with close to a 50% chance for La Niña to develop by fall. La Niña is the cold phase of the ENSO cycle during which unusually cold temperature anomalies are recorded in the South Pacific.

WTI predicts that there will be an early start to winter with the La Niña pattern among other 23 cycles they monitor. For example, in New York City this December, WTI projects 19% more heating degree days (HDDs) than normal and a whopping +112% more than last year. It would be the coldest December in 16 years. For a video discussing WTI's summer and winter, click here.

Based on the EIA’s Short-Term Energy Outlook (STEO), the year-over-year storage glut will end sometime between November and December. But the EIA’s projections are based on experiencing “normal” temperatures this winter.

I model natural gas demand based on HDDs, CDDs and the GDP. My multiple regression equation can explain 97 % of the monthly variation in demand (see actual v. fitted demand in the graph below). 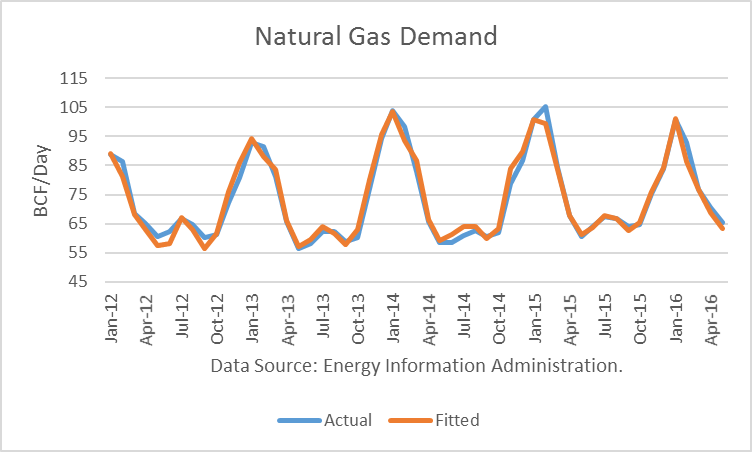 To illustrate what could happen if HDD are above normal (cold winter), I selected actual HDDs starting in June 2014 on forward. HDDs from June 2014 through April 2015 were 6.7% higher than normal.

By utilizing these higher-than-normal HDD assumptions, and keeping the EIA's supply numbers the same, I projected storage levels over the balance of 2016 and 2017. After April 2017, I used the ongoing HDDs from May 2015 forward.

The results of this one cold weather scenario illustrate how rapidly the glut could disappear and even become a shortfall by the end of next winter. In the graph below, I provide the EIA's projection (based on normal temps), this scenario and the 5-year average storage levels. 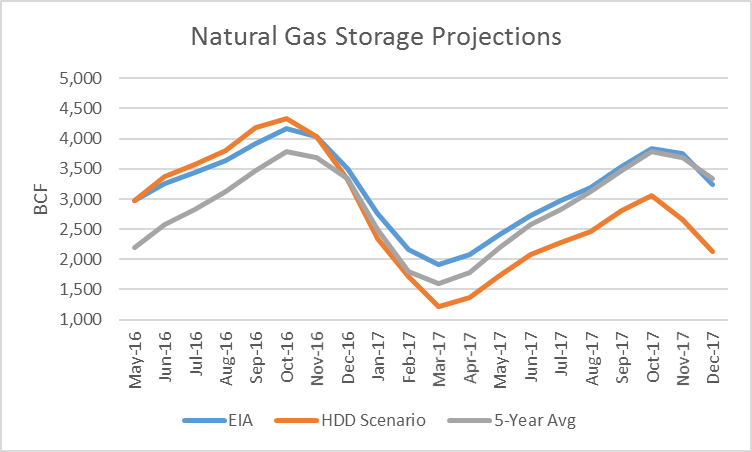 Natural gas futures prices have staged a magnificent comeback following the warmest winter in U.S. history. The weather has flipped, favoring better-than-normal gas consumption, which has begun burning away the glut.

As the dog days of summer approach, it’s a good bet that the storage overhang will get smaller. Then Old Man Winter’s turn to finish the job. If Weather Trend International’s forecast is in the ballpark, natural gas futures will find even stronger support.