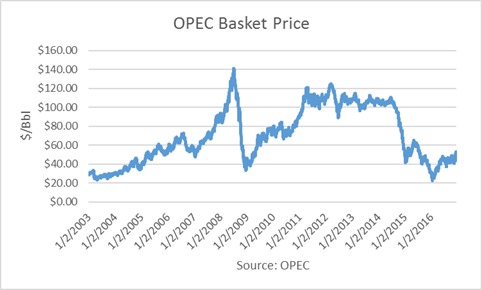 Economists have estimated that the new Saudi 2017 budget is based on oil prices in a range of $47 to $55/b. Al-Falih said that the budgeted oil price is a "conservative" scenario.

Al-Falih commented that the policies of President-elect Trump, and selection of Exxon-Mobil CEO Rex Tillerson, are "friendly to oil." But I think he may be misinterpreting Trump's America First Energy Plan.

"American energy dominance will be declared a strategic economic and foreign policy goal of the United States. We will become, and stay, totally independent of any need to import energy from the OPEC cartel or any nations hostile to our interests."

President-elect Donald Trump's transition team is discussing a proposal to impose tariffs as high as 10% on imports. The government already provides tax benefits for oil and gas, such as the depletion allowance. It could enlarge these types of incentives to encourage full employment in the energy sector, as Trump has stated, without causing oil prices to rise, which has an inflationary effect.

People often do not know that the U.S. currently imports just 24% of its oil on a net basis, considering both imports and exports. When prices were higher, shale oil added about 2 million barrel per day of liquids production (including natural gas liquids) in 2014. With net imports at 4.9 million barrels per day, it would not take many years to reach oil independence. 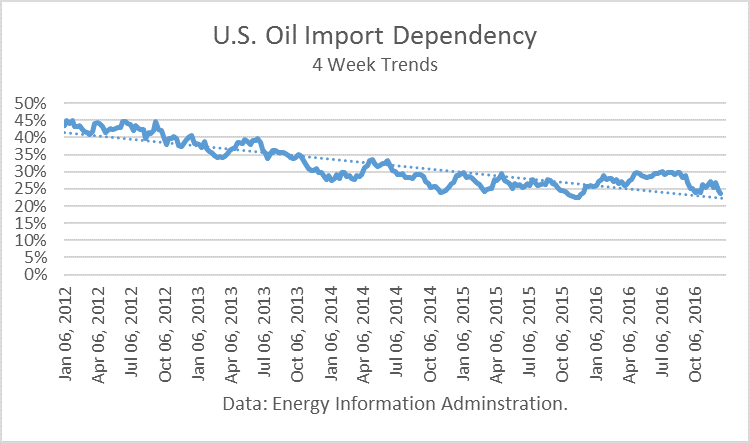 Such an achievement would bring large benefits beyond employment. It would improve the balance of payments, which would be highly supportive for the dollar. It would also reduce America's need to defend oil fields in the Middle East.

If Trump is able to get the American oil industry pumping a lot more oil, OPEC's recent problems will seem minor compared to the issues it will have to deal with in the future.