Information from the Gulf of Mexico is developing each day, and the extent of damage from Harvey to the energy industry’s infrastructure is still largely unknown as of September 5th. I detail below the potential impacts on supply and demand for crude and petroleum products. I have also contrasted them to supply/demand responses to Hurricane Katrina (2005) followed by Hurricane Rita.

The initial impact on crude production was about 1.2 million barrels per day (mmbd). GOM production at that time was about 400,000 b/d lower than the most recent estimates. 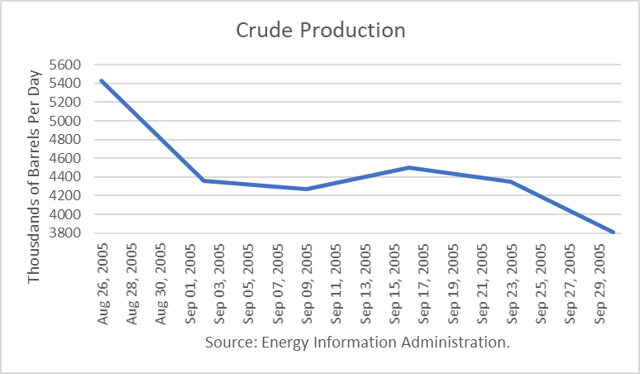 Up to roughly 3.0 mmbd of crude imports and 750,000 b/d of crude oil exports have been temporarily disrupted in the GOM for a net import reduction of 2.25 mmbd. When conditions improve, this crude will likely appear in a future reporting week; i.e., it is not lost as is crude production, although some may be diverted to other ports, depending on prices.

In 2005, crude imports were much higher, and exports were almost non-existent. The initial reduction during the first two weeks was a hit of about 1.0 mmbd. However, when Rita struck, the reduction was another 2.0 mmbd. 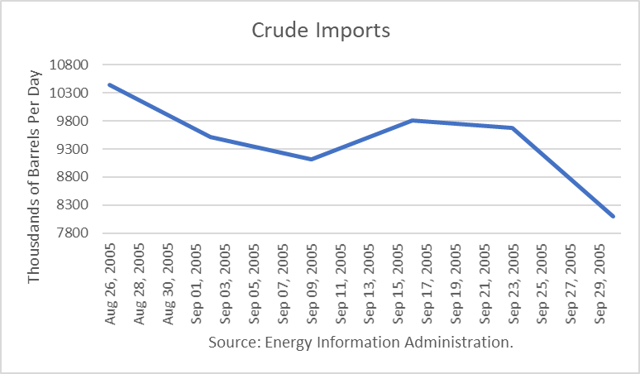 GOM product imports were in the range of 400,000 b/d, but exports were around 2.7 mmbd. And so the disruption is actually a net increase in product stocks of about 2.3 mmbd.

Furthermore, the increase in gasoline prices in the U.S. may result in lower gasoline exports in the weeks to come when ports are re-opened for trade. Demand for U.S. product exports in Mexico, Latin, and South America is more price elastic than American consumers, a factor that could limit exports at higher prices.

In 2005, the U.S. was a net importer of petroleum products, whereas in 2017 the U.S. is a net exporter of products. The initial impact was relatively modest as products were primarily imported on the East Coast. 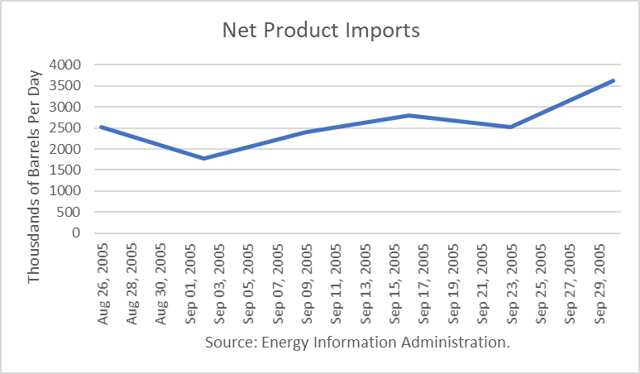 The capacity of roughly 4.4 mmbd has been shut down. The refineries in Corpus Christie may be restarted in coming days, but the extent of the damage to other refineries has not yet been reported.

The shutdowns reduce demand for crude at U.S. refineries and imply an increase to total crude stocks, once imports resume. On the flip side, the decrease implies a net reduction in product stocks of about 107% of the crude input volumes due to refinery gains (i.e., this difference is due to the processing of crude oil into products that, in total, have lower specific gravity than the crude oil processed. Therefore, in terms of volume, the total output of products is greater than the input.)

Seasonal refinery turnarounds are approaching, and so it would not be surprising to see some refiners perform their maintenance earlier-than-planned, given the costs of re-starting them. If so, this could reduce U.S. crude demand, as well as product supply, for an extended period of time.

Following Katrina, refinery inputs dropped about 1.6 mmbd. Following Rita, U.S. refinery operations fell another 3.0 mmbd. However, part of that reduction may have been due to normal maintenance. 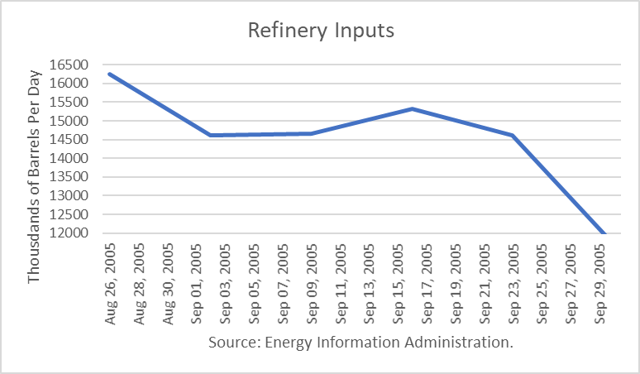 The disruption of transportation in and around the nation’s 4th largest city (Houston) is likely to have a small impact on consumption. As a guess, I am assuming it to be a couple hundred thousand barrels per day. But consumption is about to drop anyway, as a result of the end of the peak driving season following Labor Day weekend.

In September 2005, demand dropped about 1.5 mmbd. But much of that can be attributed to normal seasonality. 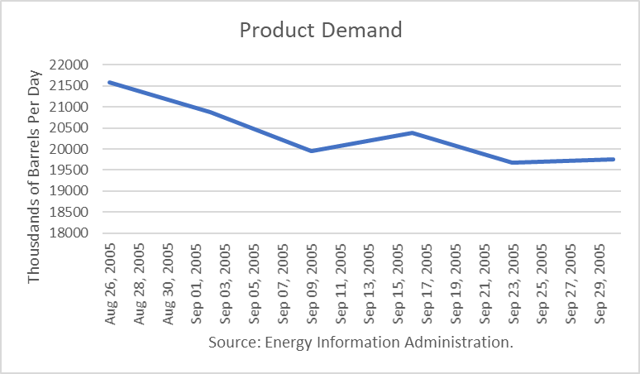 Following Katrina, crude inventories only dipped a few million barrels as a result of the reduction in crude oil demand at refineries. The Energy Dept. also released about 7 million barrels of crude oil from the Strategic Petroleum Reserve (SPR). Today, it was reported that one million barrels were released by the SPR. 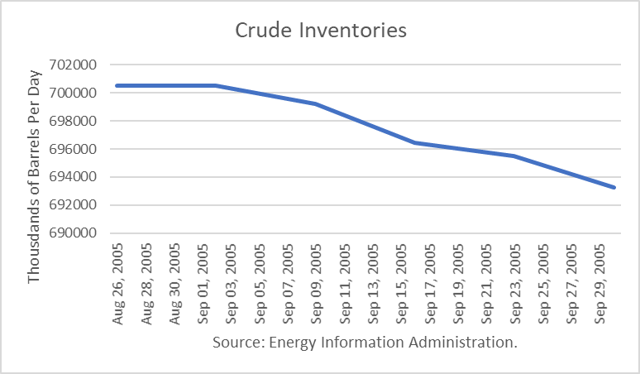 In 2005, petroleum product inventories initially fell about 9 million barrels but quickly recovered due to the seasonal drop in domestic demand. 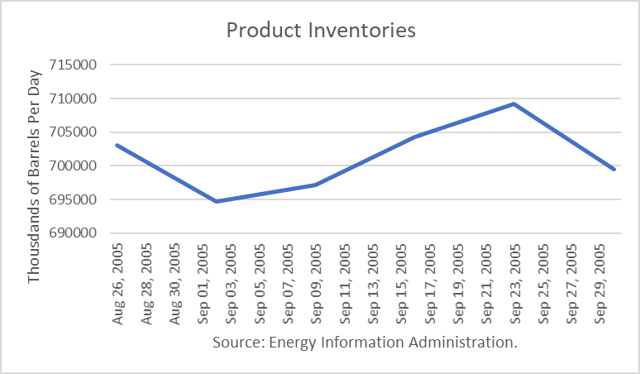 I have constructed a scenario of potential supply/demand impacts, which I emphasize as tentative. The ”surprise” initial net effect is negligible. That is because import and export effects are balanced, as well as refinery input and output results. 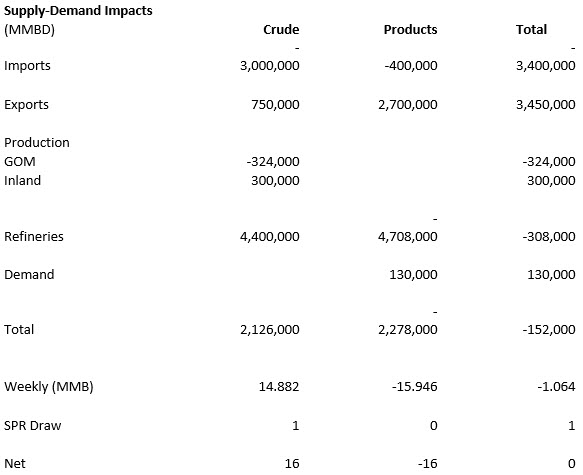 Following Katrina, crude oil futures rose by about 3 percent. I believe that the reason for such a limited bounce is the existence of the SPR, and some barrels were released. 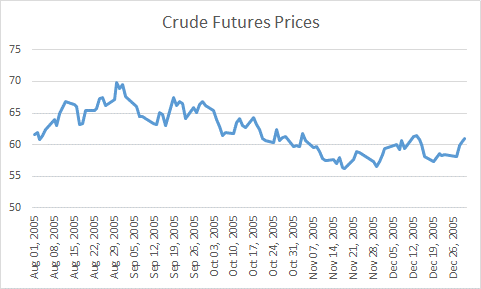 A similar price response now would put crude futures prices at about $49/b.

Finally, given the disruption to oil firms in Texas, their reporting may be shoddy, adding more uncertainty to the week numbers than normal. I would not rely too heavily on the weekly figures for accuracy over the next few weeks.

The main uncertainty now is how quickly and in what order these disruptions are reversed. I expect imports and exports to be the first, production the be second, and refinery operations to be third.

The other significant uncertainty is whether product exports are limited, due to the spike in domestic gasoline prices. If they are, the market may be surprised by a rise in petroleum product stocks in addition to the rise in crude oil stocks.

One thought on “Analysis Of Hurricane Harvey Impacts On The U.S. Oil Industry”