As the Bitcoin phenomenon rolls on, we continue to see new prospectuses for possible Bitcoin funds despite the Securities Exchange Commission denying the creation of one Bitcoin Exchange Traded Fund due to the lack of market surveillance and regulation. Oddly enough, the currency was started to give its user autonomy from governments and other regulatory agencies.

So the main reason why the currency grew in popularity is the reason why investors are finding it difficult to invest in the asset. Thus far two different proposed Exchange Traded Funds have been denied in the US, but it would appear the once denied Winklevoss Bitcoin ETF might have a chance of being approved the second time around. What is interesting is that the Winklevoss Twins were not the ones who filed the petition for reconsideration of their ETF, it was the Bats exchange, which the proposed ETF would trade on if approved.

Today one Bitcoin is valued at more than $4,000. How terribly wrong I was about investing in Bitcoin's!

Or have I been? The story of Bitcoin's isn't over by a long shot. There are still plenty of hurdles the currency needs to overcome; regulatory approval from world governments, mass acceptance from world populations, tougher security from cyber-attacks, and of course approval from the financial markets.

Regardless of what happens with the Winklevoss Bitcoin ETF or any of the others that have been proposed to the SEC, I still believe investors should stay away from the currency.

But, if you don't want to take my advice on anything Bitcoin (considering my track record) I would beg you to at a minimum avoid the Bitcoin Investment Trust (NASDAQ:GBTC) at all costs. 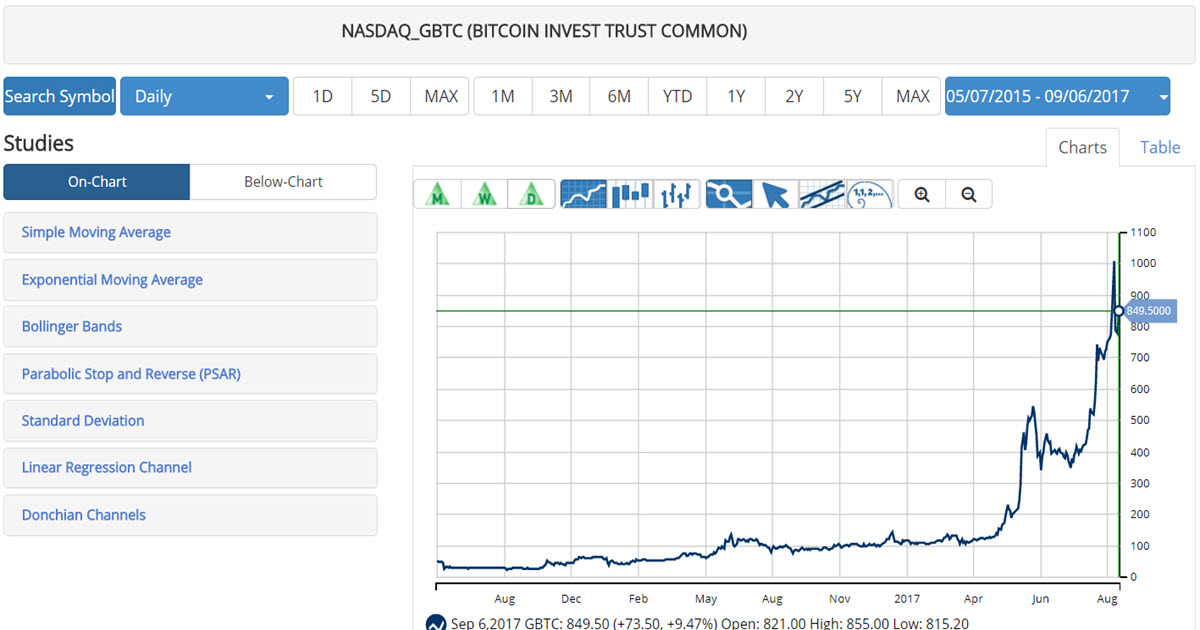 This investment is run by Grayscale, A Digit Currency Company, who purchased a large number of Bitcoin's, bundled them into a trust and then sold shares of that trust to investors.

The GBTC trades on the OTC or Over the Counter, meaning it is not a highly respected investment and doesn’t have SEC approval or oversight. Grayscale though has applied for SEC approval, but no word has been heard about its approval.

So why do I hate GBTC, even more than Bitcoin itself might I add, because while currently, the Net Asset Value of one share of the Bitcoin Investment Trust is $402, shares are currently trading for $755!

So that means if you were to buy shares of GBTC you would be paying an 87% premium, for an asset, (Bitcoin) which is also very likely grossly overvalued.

So why is GBTC trading so much higher than its NAV, because desperate investors whom 'don't want to miss the investment of a lifetime' are buying GBTC since it is an easier way to get involved in Bitcoin than going out and buying Bitcoins themselves.

Anytime you look at Exchange Traded Funds, Mutual Funds, Trust's or any other investment, you should always first attempt to determine whether or not that investment is currently overvalued or undervalued. While investment trusts, ETF, and Mutual funds have their value (the price of one share of the ETF) and their underlying value (the Net Asset Value), investors can easily tell if they are overpaying based on the fund's value, and such is the case with GBTC.

I would imagine that if other funds hit the market or the SEC does approve a Bitcoin ETF, the actual price and the NAV price of those funds would also have a rather large spread during the early days. Thus investors who insist that a Bitcoin investment will pay-off, please pay attention to these metrics before buying shares.

Disclosure: This contributor did not own shares of any equity mentioned above when this blog post was published. This article is the opinion of the contributor themselves. The above is a matter of opinion provided for general information purposes only and is not intended as investment advice. This contributor is not receiving compensation (other than from INO.com) for their opinion.

4 thoughts on “Bitcoin Bonanza Rolls On”