This riddle could be paraphrased as “It is almost worth the gold reserves of France (World #5), it is what all want now at the price of 2016, you would be eager to have it as a gift last Christmas, it stands at 14 GDPs of Kyrgyz Republic (my motherland)”. Yes, you got it right, it’s a Bitcoin - notorious, attractive and, of course, risky.

Last week the market cap of this coin hit an all-time high at the 99+ billion dollars increasing ten times from what it was just a year ago.

Chart 1. 1-year dynamics of Market Cap of Bitcoin in USD

In January I posted a summary of the performance of Bitcoin, gold and U.S. dollar. The price of Bitcoin was around $900 then, but it just smashed gold and the dollar by performance in 2016.

Readers were skeptical about the future of the coin, but a positive shift appeared according to the last poll – 29% of the readers already supported the victory of Bitcoin in 2017 compared to 22% in 2016.

It looks like we have moved through the denial stage as top investors start to comment on Bitcoin and governments start to think about how to handle it. This is natural as you can’t deny a growing elephant in your room. Earlier comments were more criticizing, ironic and angry, nowadays we can see how more and more investors and even countries accept it or at least turned to a softer rhetoric. Japan (#3 economy) was the first to officially accept Bitcoin and allowed exchanges earlier forbidden in China.

The fresh evidence for me was when my old friend, an investment professional, headed to China to buy a mining farm to mine Etherium, the second largest cryptocurrency after Bitcoin. He followed his friend who had done it for more than a year and already covered his initial farm investments.

In the emerging world, it is hard to buy cryptocurrencies directly, and people buy farms that consist of many video chips to mine coins. For instance, in Russia alone, there are 500,000 crypto miners who mine after work to receive extra money. Where there is cheap electricity, there could be cheap mining as the process requires tons of electricity, cheap electricity.

Bubble, Pyramid and A Currency Without Promises? 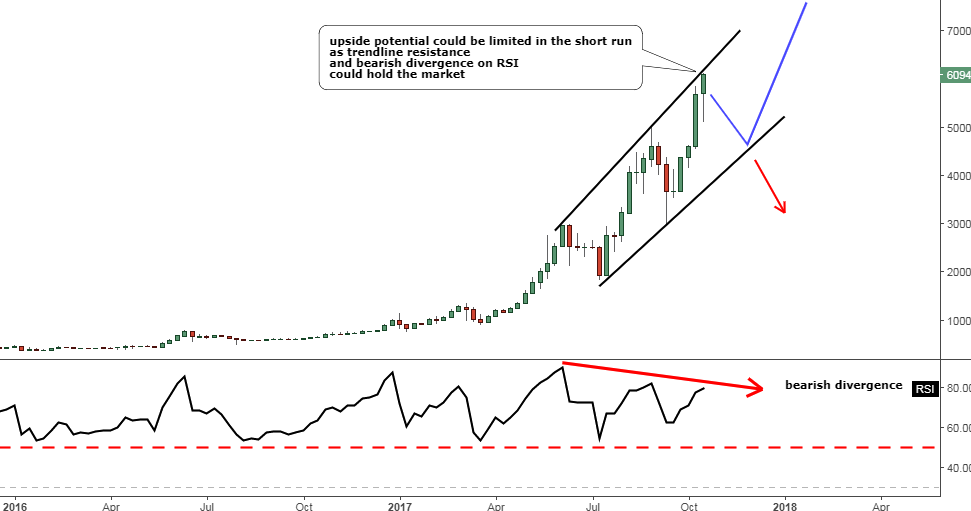 The chart of the Bitcoin has a short history, and mainly it is full of volatile moves with an exponential growth at the recent phase. Despite the shortage of historical data, we can find some interesting technical features, especially in the newest history. The first observation is the ranges played – at the start of the summer the coin was in a sideways pattern between the $1800 and $3000 marks, after the breakout, it quickly reached the $5000 area, but then retreated on the China ban to the upper side of the previous range at $3000. After that, there was a rocket style move to the upside that hit an all-time record high at the $6118 this Saturday. So the current range has almost tripled, that is the thing, which attracts new adepts.

Be careful as further upside could be limited as we have two warning signals – the first one is the fact that the price has hit the trendline resistance (black) and it was the 3rd touch. The second signal comes from the sub-chart of RSI, which shows lower tops at the bearish divergence. We know that this is an early indicator of forthcoming reversal.

There was an interesting situation. Let us take the fiat currency – U.S. dollar. You can be sure that it will be accepted as a legal tender anywhere in the United States and it can be printed endlessly. On the other hand, there is a cryptocurrency – Bitcoin. It had no promises to be accepted as a legal tender; it has only one clear parameter that could be deemed as an advantage – it has a finite quantity of 21 million coins. And people continued to buy it: some because of the fear of missing out, some because of the greed and some because of the curiosity. And they were saved by the Japanese government, which accepted Bitcoin as a legal payment method this April. Now, in the worst case, you just can buy something in Japan and sell it in any other currency in the world. To me, it looks like a purchase of the stock of a pharmaceutical company, which works on the revolutionary drug and waits for FDA approval – once done the stock just rockets higher and pays well to the buyer for risk and time.

One thing is for sure – nobody doubts the benefits of the blockchain technology. The debates are hot around the carriers – the currencies, based on that technology, which has no intrinsic value but has impressive capitalization. Some people call Bitcoin a bubble; some call it a Pyramid. There is even an idea that Bitcoin is the special government project to test it anonymously to avoid failure scandals. Let us see as only time will tell. And don’t forget a simple thing – traders trade, rulers rule.

5 thoughts on “Modern Paradox: As Large As Goldman Sachs But Has No Intrinsic Value”