Another year has passed, and we have started 2018 looking for new opportunities and facing new challenges. It is time to see the result of the 4th Pendulum swing published in the middle of 2017. To remind you, we had pitted palladium against orange juice in that race and below are your bets for that experiment.

These poll results show a good split of opinions as it wasn’t ultra-biased in favor of the metal. The majority of readers hit it right as their prediction came true and palladium (+23.5%) could easily beat not only the orange juice (1.7%) but most of the futures over the last half of the year, ranking the 6th. Moreover, this is the first failure of the experiment as it was thought that the previous loser orange juice would beat the last winner palladium, but it didn’t happen.

I am not upset about this outcome because when you start an experiment, you like to see how your hypothesis works out. Any success or failure is the part of a test, and quite often you find out something genuinely new, which is outside of your initial thought. Many things in this world are invented during the experiments that were meant to find something different.

From the very beginning, I knew that one thing was inevitably imperfect in this experiment, I always choose the top performing/underperforming metal instead of the top losing/gaining futures against the other futures to stay focused on the metals. Another thing is the period of the experiment. This is also a crucial variable of the experiment. So far it works pretty well, and I would tune only the first imperfection to let the futures, not metal to be picked against each other from now on. 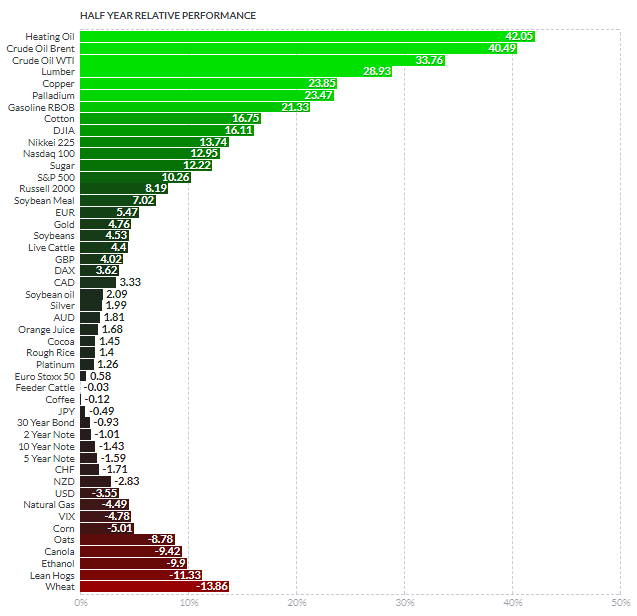 Oil and its derivatives are the top three performing futures in the 2H of 2017. Heating oil is the ultimate winner with a 42% gain. On the opposite side, there are agricultural products among the top losers. Wheat suffered the most with a -14% loss. Let’s see their charts before we push the pendulum again.

The chart of heating oil looks similar to crude oil’s graph. A considerable drop started in 2014 from the $2.87 level; it finished at the $0.85 low in 2016. After that, the market shows a slow recovery, which is accelerating recently amid the success of OPEC’s production cuts. The correction has been quite profound as it has already retraced 50% of the total drop hat started in 2011 from the $3.33 level.

There are two hurdles on the way up as highlighted with an orange circle: the black channel’s upside is already on the horizon at $2.14. The next barrier occurs at the peak of the price consolidation in 2015 at $2.24. Heating oil could experience substantial resistance here as almost three years ago the market reversed down in this area and we could see a repeat of it.

Besides that, there is an accumulating bearish divergence on the MACD Histogram sub-chart. It’s is the first alert that we should be cautious with bullish bias ahead.

The red dashed middle of an uptrend is the first trigger of the price reversal to the downside. It is located around the $1.90 mark, and we should oversee it for the confirmation of the drop. As the whole move to the upside would considered as a market correction, then there is a significant chance that the coming weakness will be even worse than previous one.

From the chart above, you could feel that wheat is like a boxer in the ring, who was knocked down once in 2008 (red down arrow) then stood up (blue up arrow) for some time. Then another punch from the global wheat glut put him down again (second red down arrow). Usually, the fight is over.

From a technical point of view, those two “knockdowns” are the legs of a deep, complex correction, which almost wholly retraced the price after a bull run in 2005-2008. It means that the downside pressure could be over for wheat and we have already witnessed the first breakout, which pushed the price from $420 up to $574 last June. That run-up was short-lived, and these days wheat is back to the historically crucial level at $424. This area was highlighted (orange circles) many times as a major resistance level or major support level for the past 14 years.
Therefore, there is no surprise that the price hovers around it.

As the market is on the defensive, I would add more support levels. Minor support is offered by the recent major low at $386 (not highlighted). I am afraid that below this level there are no other strong demand levels and the price could drop to the long-term bottom established in 2000 at the $232 mark. On the other hand, if wheat can accumulate enough energy to take off from the waterline (gray dashed) then it could tag the earlier gain level at $574.

No, let us push Pendulum once again and see what will happen by the middle of the year.

Alright, ladies and gentlemen, let's place your bets below.

2 thoughts on “Pendulum Experiment No.4: The First Failure”