Cannabis beverages are quickly emerging as one of the fastest growing cannabis sub-industries.

Back in October, Canopy announced a groundbreaking $200 million investment from Constellation Brands (CONST), the third largest US beer distributor with Corona on the roster.

In the short run, news of the investment sent shares of Canopy soaring - jumping more than 100% in the next 10 weeks.

More importantly - the deal signaled an important shift in the Canadian cannabis industry.

Big alcohol is moving into the cannabis industry and cannabis beverages are going to be huge.

Today - I see a new way to potentially cash in on cannabis beverages.

Shares are listed under the ticker WMD on the Toronto Venture Stock Exchange - an exchange for smaller companies to access public capital.

I see average daily trading volume of 1.1 million so this ticker is plenty liquid.

I also see a US ticker of WDDMF traded in OTC markets. I see average daily trading volume of 69,000. Less liquid than the Canadian ticker, but still plenty liquid for 99% of investors.

WMD is still an early stage cannabis company. Its market value of $100 million is a fraction of industry giants such as Canopy and Aurora.

However - there is plenty to be optimistic about.

WMD has secured a coveted license from Canada to grow and sell cannabis. That right there is a big plus while many companies are stuck in a multi-year backlog.

With permits in hand, WMD is in the early stages of commercial production. It operates a 26,000 sq. ft. indoor facility in Aylmer, Ontario.

WMD just released an update on the project. Here's a clip from the press release:

"The first phase of construction covers 220,000 sq. ft. of the 610,000 sq. ft. greenhouse and is well underway. Upon completion of security installations and Health Canada site audit, WeedMD anticipates planting its first crop over the next month. With Phase I nearing completion and its first harvest expected in July 2018, WeedMD's annual production will increase from 1,500 kg to more than 21,000 kg. 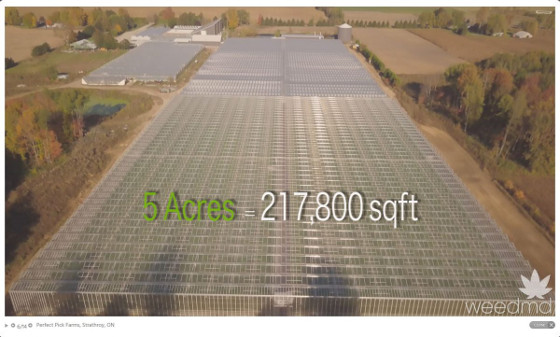 This all looks good on its own. WMD is ramping production to cash in on recreational - just like a like other industry players such as Aurora and Canopy.

However - something stands out about WMD that makes it unique in the Canadian cannabis sector.

The goal of the partnership is to develop, manufacture and sell a branded line of cannabis beverages.

Here are more details on the partnership directly from the press release:

"CanBev will operate one of the first cannabis-infused beverage production facilities in Canada. The joint venture partnership will focus on manufacturing, marketing and distribution of cannabinoid-infused beverages for the medical and future adult-use cannabis markets.

WeedMD will be the exclusive cannabis supplier and distributor for CanBev cannabis-infused beverages and will designate production space at its 610,000 sq. ft. state-of-the-art facility in Strathroy for CanBev's operation.

Phivida will be responsible for product innovation, research and development, formulation and branding. Phivida will also sublicense encapsulation technologies to CanBev for enhanced bioavailability and solubility and create new consumer brands to serve target consumer segments in the pending adult-use market."

This tells me that WMD's cannabis product line is going to be tilted towards cannabis beverages.

That makes WMD a targeted play on the Canadian cannabis beverages market.

I think it's a smart move. I expect the cannabis drinkable market to be one of the fastest growing cannabis sub-industries.

WMD jumped higher on the chart in late 2017 with the broader cannabis sector.

After hitting a new all-time high in early January, shares have been trending lower for the last few months.

I don't view this weakness as a signal that something is wrong with WMD. I see this is a profit-taking after a huge run.

Looking forward I expect this bear market to set the foundation for the next bull market.

The beverage partnership is still in the very early stages. WMD and Phivida have a lot of work to do to successfully launch and commercialize a line of cannabis beverages.

WeedMD is making a big push into the cannabis beverages market. It's a high-risk play with a lot of work ahead. But if WMD is successful, the company is in position to be a domestic and global leader. I would expect that to be very good for shares.