Fears of potential shortages from the implosion of Venezuela’s production, and the imposition of sanctions on Iran, have catapulted the Brent oil price marker to $80. However, there are great uncertainties about how much oil supplies will be disrupted over the balance of 2018, and what the supply response will be from OPEC and other producers, such as Russia and the United States.

Venezuela’s production fell by 45,000 b/d in April from March, averaging 1.47 million barrels per day. The April decline was equal to the average monthly drop thus far in 2018. Whether the rate of decline will increase, or stay the same, is unknown, but what is known is that oil workers have been leaving the country, unpaid.

The May 20th presidential election has been called a sham. And President Trump is considering sanctioning Venezuela's oil or prohibiting the crude to be sold in the U.S. If he does, Venezuela’s economy is expected to collapse because it is totally dependent on oil revenues.

The Energy Dept. would probably release crude oil from the Strategic Petroleum Reserve to make-up for any shortfalls of imports from Venezuela that refiners depend on. 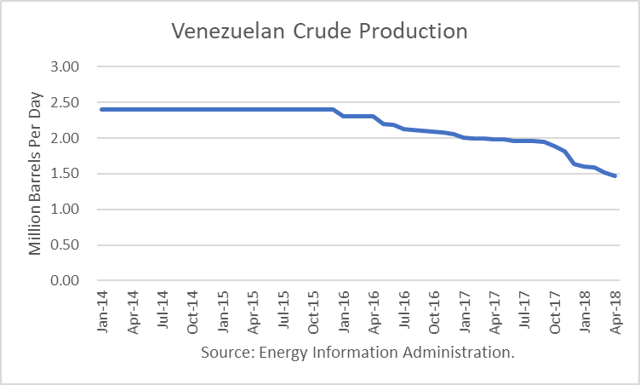 The imposition of the first round of U.S. sanctions on Iran is expected in early August. Full sanctions are scheduled to go into effect in early November.

The European Commission has taken stepslast week to protect the interests of EU companies investing in Iran as part of the EU’s continued commitment to the Joint Comprehensive Plan of Action, also known as the Iran nuclear deal. The EC acted on four fronts:

Bob Dudley, CEO of British Petroleum, said that internal BP forecasts show that Iran’s crude exports could drop by 300,000 b/d to 1 million barrels per day. He said, "We're about to begin to see political factors creating trade dislocations, sanctions and things like that.” But he personally believes the impact will be at the lower end of the range.

Patrick Pouyanne, the chairman and CEO of French oil major Total, said on Thursday that Total had halted plans to help develop Iran's giant South Pars Gas Field, as it seeks further clarification. Pouyanne said that it was "impossible" to do business with Iran without a waiver from U.S. sanctions since Total cannot risk losing access to the U.S. banking system. 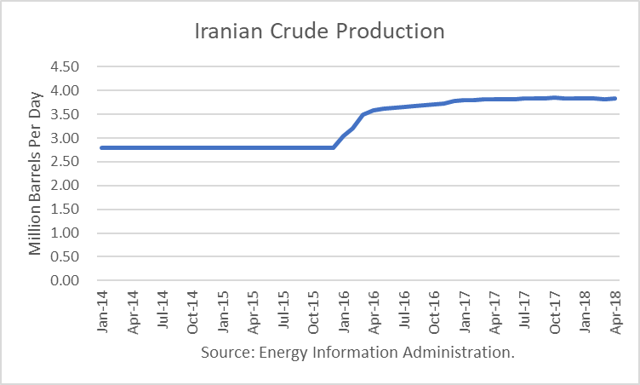 OPEC is scheduled to meet again toward the end of June, but Saudi Energy Minister Khalid al-Falih said recently on Twitter:

India is seeking assurances from Saudi Arabia, that oil prices will remain "stable and moderate." Energy minister Dharmendra Pradhan spoke with Saudi oil minister Khalid Al-Falih to "express his concern about rising prices and its negative impact on consumers and the Indian economy."

The UAE oil minister, the current president of OPEC, said OPEC has bigger issues to consider, besides Iran, such as the collapse of Venezuelan production.

Reports from Saudi Arabia had stated that the Saudis would prefer oil prices to be between $80 and $100 per barrel to enable it to meet its annual budget. That being the case, OPEC may drag its feet making-up for any shortfalls. On the other hand, Treasury Secretary Mnuchin stated that the White House had assurances from the producers that any disruptions in Iran’s exports would be offset by higher production by countries with spare capacity.

But oil markets move higher in anticipation of supply shortfalls, and then correct once it sees the new supplies coming. "I would not be surprised to see $100 per barrel in the coming months," Pouyanne said during an appearance at the Center for Strategic and International Studies.

Bob Dudley expects that the flood of shale oil production, and the reopening of OPEC production from the OPEC+ deal, will cool the market down, and prices will drop back to $50 to $65/b. For example, the EIA projects that June shale oil production is expected to increase by 144,000 b/d on top on an upwardly-revised figure for May of 38,000 b/d.

Assuming OPEC production can be maintained at current levels due to offsets by KSA, the UAE, and others, the EIA forecasts that global oil stocks will actually rise over the balance of 2018, ending the year higher than they were at end-2017.

If EIA’s projections are realized, Mr. Dudley will likely be correct. Prices would cool down. But until the market sees offsetting production, it will likely hold onto the risk premium it has priced-in, and may even add to it.

3 thoughts on “Oil Market Risks For 2018: Upside Then Downside”