The financial cohort has conspicuously underperformed the broader market for the majority of 2018. The group didn’t participate in the broader market performance in Q3 where the S&P 500 had its best quarter since 2013. Banks have had domestic and global economic expansion tailwinds at its back while posting accelerating revenue growth, increasing dividend payouts, engaging in a record number of share buybacks and benefiting from tax reform. Augmenting this economic backdrop is a record number of IPOs, a record number of global merger and acquisitions, rising interest rates, deregulation, and tax reform. Banks are benefiting in unique ways due to the consulting fees regarding mergers and acquisitions and trading around market volatility. All of these elements provide an ideal confluence that bodes well for the financial sector. JP Morgan (JPM), Citi (C), Wells Fargo (WFC), Goldman Sachs (GS) and Bank of America (BAC) seemed to be poised to continue to benefit from the favorable economic backdrop. Thus far in 2018 the financials have performed terribly considering the broader market performance and the aforementioned economic tailwinds. There’s negative sentiment that’s placed the financials in a holding pattern for much of 2018 over concerns of rapid interest rate increases and an inverted yield curve.

The Federal Reserve expects the economy to continue to strengthen and inflation to rise shortly. The economic strength coupled with the threat of inflation provides an environment that’s ripe for rising interest rates. The Federal Reserve has been very bullish on the domestic front and signaled that rate hikes will continue and may even accelerate its pace of rate hikes contingent on inflation and economic strength. There’s no question that the financials benefit from rising interest rates, and Bank of America(BAC) has one of the largest deposit bases among all banks and serves as a pure play on rising interest rates. Goldman Sachs (GS) has even branched out into consumer banking with its Marcus product so needless to say all big banks will benefit from their deposit bases.

Federal Reserve Chairman Jerome Powell stated that the unemployment rate currently stands at 3.9%, near a 50-year low while core inflation is right around 2%. Powell said that these two metrics are part of a “very good” economy that boasts “a remarkably positive outlook” from forecasters. The central bank approved a quarter point hike rate in the funds rate that now stands at 2.25%, and the committee indicated that another rate hike would happen before the end of the year. 2019 will likely see three more rate hikes and 2020 will see one rate hike before pausing to assess the delicate balance of rising rates in the midst of a strong economy while taming inflation.

“Removing accommodation too quickly could needlessly foreshorten the expansion,” Moving too slowly could risk rising inflation expectations. Our path of gradually removing accommodation, while closely monitoring the economy, is designed to balance these risks.”

Provided this backdrop of successive rate hikes and positive economic commentary, financials are ostensibly poised to benefit as a result. However, despite this rising interest rate environment the financial cohort has struggled to perform in 2018 (Figure 1). 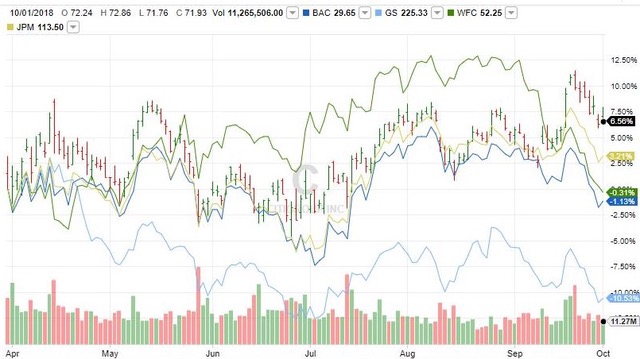 An inverted yield curve is an interest rate environment in which long-term debt instruments have a lower yield than short-term debt instruments. This type of yield curve yield is widely considered to be a predictor of economic recession. Historically, the inverted yield curves have preceded many U.S. recessions. Due to this historical correlation, the yield curve is often seen as an accurate prediction of negative business sentiment and the ensuing economic slowdown. An inverse yield curve predicts lower interest rates in the future as longer-term bonds are being demanded, sending the yields down.

The banks would certainly be negatively impacted by an inverted yield curve as the gap between long-term and short-term Treasury yields potentially unfold and serve as a reliable predictor of difficult economic conditions ahead. Banks borrow at short-term rates via deposits and interbank lending and lend at long-term rates to businesses, autos, and home loans. Thus, when long-term rates exceed short-term rates, bank lending is profitable, and the opposite is true under inverted yield curve conditions. This typically signals troubled credit markets via restricted access to capital and reduced lending to fuel the economy.

“If the term premium remains very low, any given amount of monetary policy tightening will lead to an inversion sooner so that even a modest tightening that might not have led to an inversion historically could do so today,” she said. Brainard further stated that further gradual increases in the federal funds rate would likely be warranted. “With fiscal stimulus in the pipeline and financial conditions supportive of growth, the shorter-run neutral interest rate is likely to move up somewhat further, and it may well surpass the longer-run equilibrium rate for some period,” she stated.

Per Goldman Sachs, chances of a recession in the next three years are at a “below average” possibility. The U.S. economic expansion is probably only in its middle stages with the current run just ten months away from being the longest expansion on record per Goldman economist Daan Struyven

"The good news is that the model still classifies the expansion as mid-cycle," Struyven said in a note. "It sees the pickup in wage and price pressures as still too muted for an inflation overshoot late-cycle and screens the private sector saving surplus — which now stands above the historical average — as too large for a financial overshoot late-cycle."

An "inflation overshoot" primarily would entail highly elevated asset prices — like the stock market — as well as extremes in wage growth and price increases. A financial overshoot would see high private sector deficits and extremes in consumer confidence. Inflation has been edging higher as have salary increases. Consumer confidence also is near record levels. However, Struyven sees the moves as contained and unlikely to put a strain on the economy.

"Cyclically, the financial system and the economy have spent a long time climbing out of the deep hole torn by the crisis and Great Recession," he wrote. "And structurally, better-anchored inflation expectations allow the Fed to increase interest rates at a more gradual pace than in past cycles."

Many are concerned about the length of the economic rebound after the financial crisis with unemployment at 3.9% or nearly a 60 year low translates into a recovery that may not last much too much longer. With the never-ending interest rate increases continuing to climb places additional strains on the long bull market. Struyven said there's danger that the current conditions could overheat and at least send the recovery from midcycle to late cycle. Regardless, a recession risk is "muted in the near term and below average at a three-year horizon."

Investors see the financials being in a tough spot in this economic cycle despite the favorable tailwinds because of where the economic cycle stands and the bearish commentary in the near term.

The financial cohort is in a holding pattern as of late where on the one hand the current economic backdrop is highly favorable via a rising interest rate environment, tax reform, low unemployment, wage growth, deregulation, and tax reform. On the other hand, the Federal Reserve indicated that interest rate increases might need to be accelerated and boosted to contend with inflation without much caution thrown to the potential inverted yield curve that may be unfolding. The inverted yield curve is typically indicative of a looming recession and will negatively impact the banks and their ability to run profitable businesses under such conditions. Fears of a Federal Reserve induced economic slowdown via interest rate increases and the potential of an inverted yield curve have placed the financials in a tough position. Despite this predicament, the deregulation and rising interest rates coupled with a strong economy have allowed the banks to return record amounts of value to shareholders via increased share buybacks and dividends. The financial cohort is relatively inexpensive and poised to benefit from this favorable backdrop for the foreseeable future in the absence of an inverted yield curve and a below average risk of a recession.