The Energy Information Administration released its Short-Term Energy Outlook for January, and it shows that OECD oil inventories likely bottomed last June at 2.806 billion barrels. It estimated an 8 barrel gain for December to 2.883 billion, 39 million barrels higher than a year ago.

Throughout 2019, OECD inventories are generally expected to rise. At year-end, EIA projects ending the year with 2.951 million barrels, 68 million more than at the end of 2018.

EIA also extended its outlook through 2020 for the first time. It projects that stocks will build another 75 million barrels to end the year at 3.025 billion. That would push stocks into glut territory. 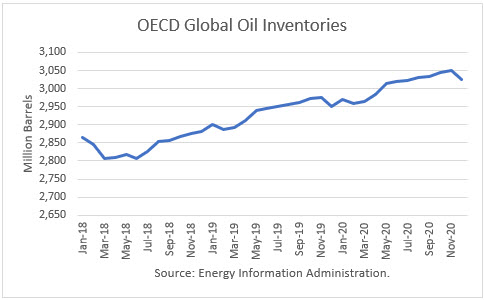 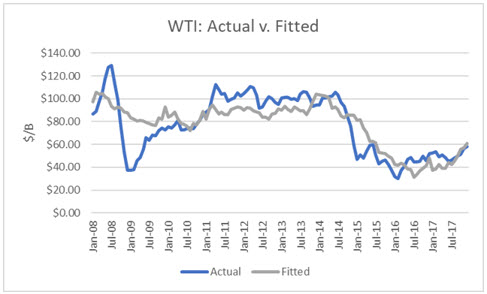 I used the model to assess WTI oil prices for the EIA forecast period through 2019 and compared the regression equation forecast to actual NYMEX futures prices as of January 16th. The result is that oil futures prices are presently undervalued though from May and beyond, they are overvalued. In August 2019, oil prices would drop into the low $40s if these inventories are realized. And in the latter part of 2020, oil prices would drop below $40. 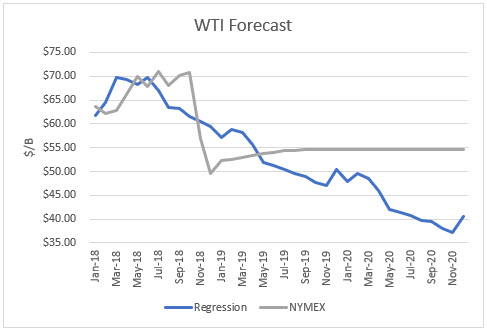 Based purely on this model, the oil price crash was overdone. However, the market was shocked by the sudden oversupply since it was expecting an undersupply once sanctions went into effect.

U.S. oil inventories have been building fast, taking into account both crude and products. And so the price recovery following the crash is subject to another round of selling sooner or later.

Two ‘surprises’ that could jolt the market in 2019 are that the OPEC+ cut of 1.2 million barrels per day is not actually occurring, and Trump may cut a deal with Iran, ending the sanctions. In the first case, there is no evidence that the Russians and other non-OPEC producers have cut anything like 400,000 b/d as promised. In the second case, Iran’s economy is suffering, and Trump would probably be happy to make a deal if Iran agrees to his terms.

According to this analysis:

“Anyone certain that the Iranians won't negotiate any modifications on the nuclear deal shouldn't be so sure. Domestic pressures and the readiness of the Russians to play the arbiter role can provide the Iranians an out. Their history suggests they will go for it.”

A deal with Iran ending the sanctions would result in the unleashing of Iran’s additional exports of more than 1 million barrels per day. I would doubt Saudi Arabia and friends would be willing to cut again to make room for Iran.