The Toys “R” Us bankruptcy has proven to be an albatross around Hasbro’s neck despite the confident, forward-looking narrative that’s been put forth for the previous two quarters by its CEO. The recent fourth-quarter earnings were disappointing, to say the least, capping off its historically best quarter. Revenue declined on an annual and quarterly basis by 12% and 13%, respectively. Despite these Toys “R” Us headwinds, Hasbro remains confident as the company annualizes the inventory glut caused by the liquidation. Hasbro (HAS) has a compelling future across its portfolio with many catalysts on the near and long term time horizon. This confident future was reinforced with an 8% increase in its quarterly dividend payout despite its revenue declines.

Hasbro is setting the post-Toys “R” Us bankruptcy narrative and laying out a business roadmap for long term profitable growth across its brands. This sentiment has been further bolstered by positive commentary from its CEO that the company will absolve itself of this Toy “R” Us related bankruptcy headwind come 2019. There's many current and future growth catalysts for Hasbro in movie franchises such as Marvel, Star Wars and other Disney (DIS) properties (Hasbro is the exclusive toy maker), potential e-sports with Dungeons and Dragons and Magic: The Gathering, newly acquired Power Rangers franchise which will emulate Hasbro’s My Little Pony and Transformers’ Bumblebee within Hasbro Studios and its legacy games such as Monopoly and Nerf.

Hasbro’s CEO Brian Goldner has had a string of interviews with Jim Cramer on Mad Money. Over the past year, Goldner has had the tough task of getting out in front of the Toys “R” Us bankruptcy and glut of merchandise.

In April 2018 Jim Cramer was confident that “the worst is over” for Hasbro as the Toys “R” Us liquidation unfolds. Goldner went on to say "I am certain that, a year from now, we will not be talking about Toys “R” Us in this negative light."

In July 2018, Goldner stated, “We’re lining-up share recapture plans with our remaining retailers, building bigger programs for the holidays” while “working through the European situation, there’s be disintermediation between online retail and the brick and mortar retailers, we’ll work through all that as well and believe that all these issues will disappear by the end of 2018 and we move on to grow in 2019”.

In October 2018, Goldner discussed progress on Hasbro’s initiatives and provided some color on a monopoly game centered around Fortnite, highlighting that this was Hasbro’s top-selling product in the first week of Q4. He also discussed the growth potential of esports franchises Fortnite and Overwatch as major catalysts into a new pillar of offerings. These franchises are already playing out via toys "we have Nerf Overwatch coming, where you get to play the game for real," and "That will follow with Nerf Fortnite." Hasbro has also been beta testing new online games based on its legacy Magic: The Gathering, Dungeons & Dragons and Wizards of the Coast franchises. Teasing "an announcement from us shortly talking about how we're going to enter into esports in a major way," Goldner stated.

Path Forward Beyond Toys “R” Us

Recently, on Feb 11 Brian Goldner was interviewed on Mad Money to discuss Q4 earnings and forward-looking business strategy in a post-Toys “R” Us retail landscape.

Per Goldner, the first fiscal quarter of 2019 will be the last investors hear of the Toys “R” Us woes as Hasbro (HAS) finally annualizes the last quarter in which it shipped Toys “R” Us product.

"Brands that had been supported for years by Toys “R” Us clearly were impacted," "We see it as a disruption and an interruption in our growth, but as we go forward, we're absolutely confident that we get back to the growth trajectory that we had been on over a number of years," Goldner said.

"The industry has been growing over the last number of years. Obviously, it went backward last year," he said. "As we move forward, 2019 is all about growth and expansion of operating profit margin, new initiatives, and innovations, an incredible entertainment slate led by our own brands."

"As we get into the fall, we're going to have more proprietary innovation, and, frankly, innovations that we aren't going to present quite as early as we used to" in the digital gaming arena, Goldner said, explaining that Hasbro wanted to ensure that it wasn't sharing innovation "too early ... because it's a very competitive category."

The path appears to be compelling as Hasbro sheds the Toys “R” Us overhang moving into 2019. 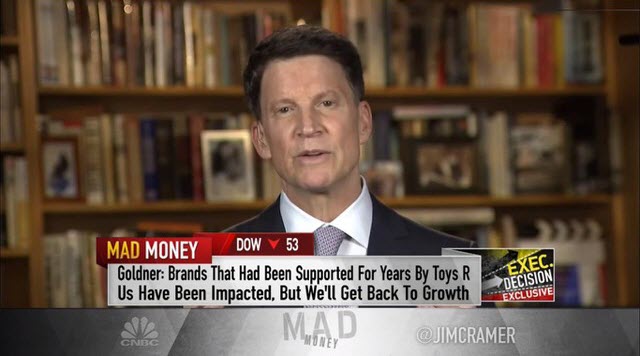 2018 full-year net revenues of $4.58 billion decreased 12% to $4.58 billion versus $5.21 billion in 2017. The lower revenues reflect lost Toys “R” Us revenues throughout 2018 in the U.S., Europe, and the Asia Pacific, as well as a more meaningful impact than expected from the liquidation of Toys “R” Us inventory into these markets.

The company remains in a strong financial position with cash and cash equivalents of $1.18 billion. The company returned $559.4 million to shareholders in 2018; $309.3 million in dividends and $250.1 million in share repurchases.

“2018 was a very disruptive year, driven by the bankruptcy and liquidation of Toys “R” Us across most of the world and a rapidly shifting consumer and retail landscape,” said Brian Goldner. “During 2018, we diversified our retailer base, meaningfully lowered retailer inventories and delivered innovative new offerings to our global consumers. We were not, however, able to recapture as much of the Toys “R” Us business during the holiday period as we anticipated as the effect of its liquidated inventory in the market was more impactful than industry experts, and we expected.

“In 2019 we are entering the next innovation cycle for NERF, and we will deliver break frame innovation across price points in the market this year. Hasbro’s POWER RANGERS line will hit the market in the second quarter, setting the stage for an all-new era for this iconic brand. We are positioned to advance our gaming leadership, leveraging our investments, social relevance, innovative gameplay and the industry’s broadest games portfolio, including the launch of our digital game Magic: The Gathering Arena. We will deliver all-new play experiences in support of a raft of compelling entertainment properties, including Marvel Studios’ Captain Marvel and Avengers: Endgame, Columbia Pictures’ Spider-Man: Far From Home, Disney Animation’s Frozen 2 and Lucasfilm’s Star Wars: Episode IX. Finally, to successfully deliver these and numerous other initiatives, we’ve re-imagined and re-designed our go-to-market strategy globally supported by compelling, digital-first marketing programs for our consumers and retailers.”

Hasbro (HAS) is confident that the company is turning the corner with regard to the Toy “R” Us liquidation and the inventory glut that resulted. Hasbro has signed exclusives with Wal-Mart, Target and Amazon while building out its direct to consumer channel to mitigate the fallout of Toys “R” Us as the company attempts to recapture the Toys “R” Us channel of revenue. Hasbro has many growth catalysts on the horizon via the diversity of its portfolio and partnerships, especially with esports and Hasbro Studios. The company remains in a strong financial position and increased its dividend payout by 8%, serving as a testament to its confidence in its business moving forward. 2019 is shaping up what may be an inflection point for the company as it places the Toy “R” Us bankruptcy in the rearview and propels its business into restoring growth.