Hasbro (HAS) is fresh off Q2 2019 earnings after turning the corner and going on the offensive with a slew of revenue verticals and end markets. Hasbro has its Disney toy licensing deal (Marvel, Star Wars and Disney Princess lines), Hasbro Studios (Transformers’ Bumblebee, My Little Pony, Power Rangers), E-Sports (Dungeons and Dragons and Magic: The Gathering) and reinventing its legacy games (Monopoly and Nerf) while driving newer products (Beyblades). Hasbro blew out expectations for its Q1 2019 earnings and the stock jumped 16%, breaking out above the $100 threshold, a level that hadn’t seen in over 6 months. This was followed up with its recent Q2 2019 earnings that blew away investors and the stock jumped 9% to all-time highs of over $120 per share.

Hasbro has set the post-Toys-R-Us bankruptcy narrative and laid out a business roadmap for long term profitable growth across its brands. Hasbro has had the tough task of getting out in front of the Toys-R-Us bankruptcy and working its way through the glut of merchandise. This sentiment has been bolstered by positive commentary from its CEO that the company has effectively absolved itself of the Toy R Us related bankruptcy headwind. All of this, while being fully committed to returning value to shareholders via a combination of share buybacks and dividend payouts. Hasbro has a compelling future across its portfolio with many catalysts in the near and long-term time horizons. As this turn-around was unfolding, the previous two quarters weren’t a surprise considering the year-over-year comparisons were in the midst of the Toys-R-Us fallout while the company layered-in several growth initiatives. This recent 6-month run in the stock was... well, easy!

“We delivered a high-quality second quarter, with positive consumer trends at retail and profitable growth led by several geographies and brand categories,” said Brian Goldner, Hasbro’s chairman and chief executive officer. “Our investments are differentiating Hasbro’s portfolio and delivering profitable revenue streams, including continued MAGIC: THE GATHERING revenue growth in tabletop and digital. We grew revenues in the U.S. and Europe, and we believe we are well-positioned to deliver against our target of profitable growth for the full-year 2019.”

“The global Hasbro team executed a strong quarter with revenue and profit gains while managing a dynamic trade and inventory environment,” said Deborah Thomas, Hasbro’s chief financial officer. “As part of this process, we incurred some additional costs and took more inventory into the U.S. than typical. Despite these steps, margins improved, Hasbro’s overall inventory position declined, and we generated healthy operating cash flow. We are generating cost savings from our plan and are on track to deliver approximately $50 million in net savings this year. Importantly, we are well-positioned for the holiday season with major brand initiatives across categories, including The Walt Disney Animation Studios' Frozen 2 and Lucas Films' Star Wars: The Rise of Skywalker which do not launch until the fourth quarter.” 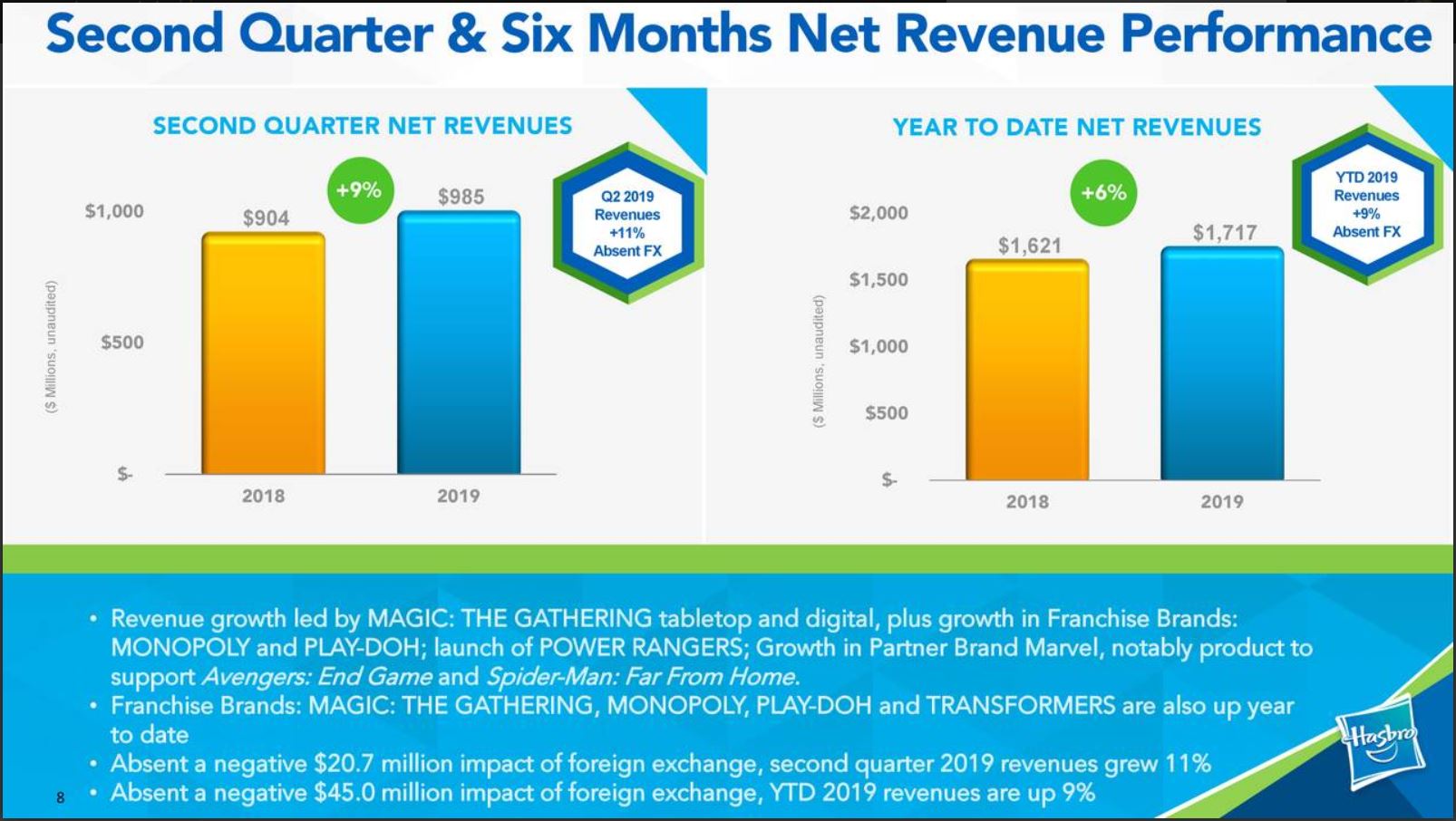 Hasbro struck a licensing deal with Disney years ago to have exclusive rights to some of Disney’s most successful franchises such Marvel, Disney Princess line and Star Wars. The company's exclusive partnership with Disney was highlighted on the Q2 earnings conference call. Brian Goldner stated that there’s strong demand for Avengers-related toys and success with innovation around Princess and Frozen dolls. Goldner sees the Disney relationship as continuing to boost its top and bottom-line numbers into that latter part of the year with Frozen 2 and Star Wars: The Rise of Skywalker coming into the fold in Q4 2019. Goldner also sees its Disney-related initiatives continuing into 2020 and expects a tailwind for its business throughout next year. Disney’s box office dominance has dwarfed all other competitors securing roughly a third of market share in terms of box office gross. Now that the Fox acquisition has been approved and is proceeding, there’s potential for Hasbro to secure other Disney properties via the Fox integration.

After Hasbro reported it Q4 2018 earnings and full-year numbers, Brian Goldner was interviewed on Mad Money with Jim Cramer.
Per Goldner, the first fiscal quarter of 2019 will be the last investors hear of the Toys-R-Us woes as Hasbro finally annualizes the last quarter in which it shipped Toys-R-Us product.

"Brands that had been supported for years by Toys-R-Us clearly were impacted," "We see it as a disruption and an interruption in our growth, but as we go forward, we're absolutely confident that we get back to the growth trajectory that we had been on over a number of years," Goldner said.

"The industry has been growing over the last number of years. Obviously, it went backward last year," he said. "As we move forward, 2019 is all about growth and expansion of operating profit margin, new initiatives, and innovations, an incredible entertainment slate led by our own brands."

The path was laid out by Goldner, and based on its Q1/Q2 numbers; we can see that this narrative has come to fruition. He laid out a compelling growth path post-Toys-R-Us overhang moving into 2019 and beyond.

Hasbro has posted back-to-back quarters of impressive EPS and revenue beats. The stock has had a multi-step rise in its stock price, which currently sits at an all-time high of $124 per share. Hasbro is now on the offensive, and it’s safe to say that the company has turned the corner with regard to the Toy R Us liquidation and the inventory glut that resulted. To this end, Hasbro has signed exclusives with Wal-Mart, Target, and Amazon while building out its direct-to-consumer channel to mitigate and recapture the market share that was lost. Goldner stated that after Q1 2019, investors will no longer hear about the Toys-R-Us headwinds impacting the company and sure enough the combination of its Q1 and Q2 numbers delivered huge beats on both the top and bottom line. The company has many growth catalysts on the short and long-term horizon via the diversity of its portfolio and partnerships, e-sports, new Power Rangers acquisition and Hasbro Studios. 2019 has shaped up to be an inflection point for the company as it places the Toy-R-Us bankruptcy in the rearview and propels its business into the future with partnerships, growth initiatives, and durable and compelling brands.