This week we have a stock market forecast for the week of 4/25/21 from our friend Bo Yoder of the Market Forecasting Academy. Be sure to leave a comment and let us know what you think! 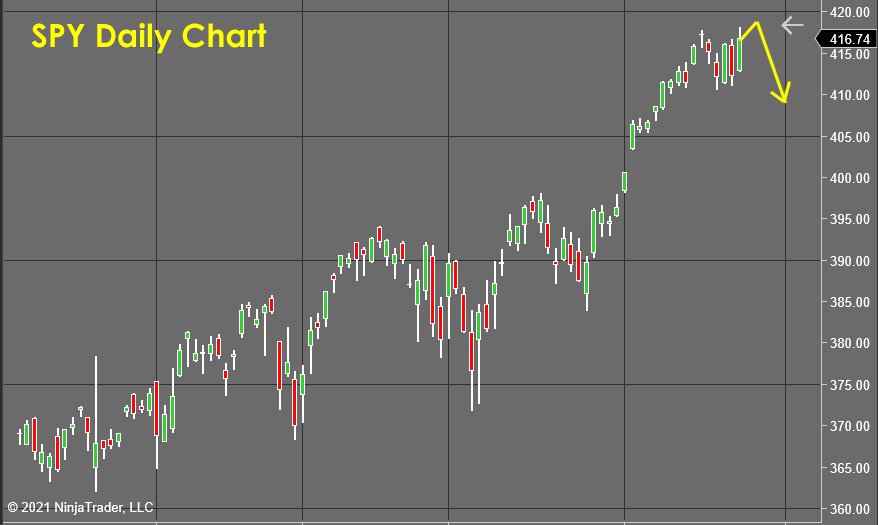 My short-term forecast is as seen in the daily chart here. The rally will likely find strong resistance and begin to either correct or form a range near highs.

The short-term conflict of bearish short-term energy, in contrast to the increased bullish energy on deeper timeframes, will keep us in conflict for the week that is to come. It remains a lower-probability environment, so I’m planning to continue focusing on individual issues for now. 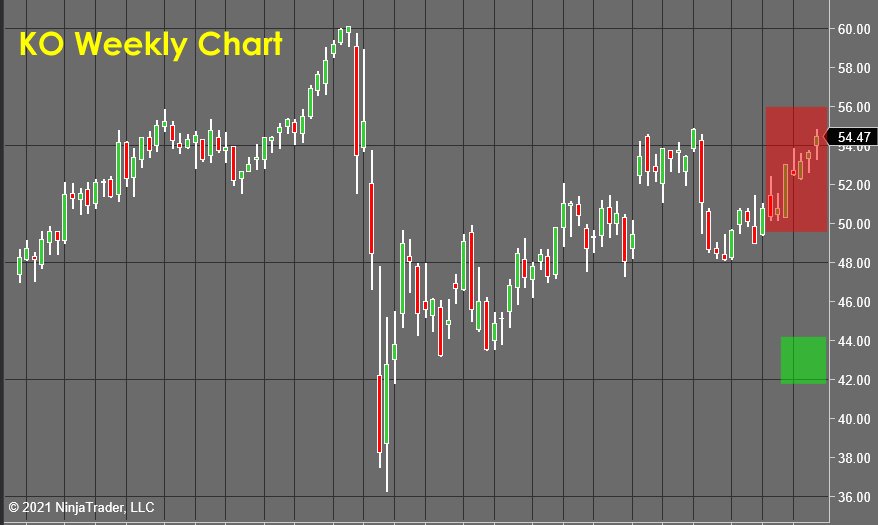 Coca-Cola (KO) continues to resist the efforts of the bulls to break this stock out to the upside. The relative weakness I have commented on in recent weeks continues to work in my favor, but there is a lot to do as the price needs to press back down to test the $48 area if any significant move is to be seen. 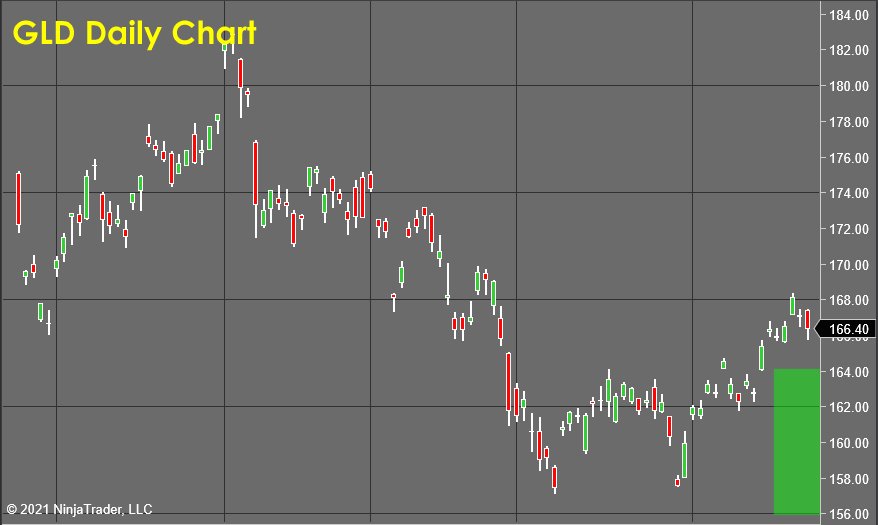 Gold (analyzed here using GLD) had a great week, finishing its follow-through after a recent breakout above the $164 level to begin a correction.

While many traders fear “the wiggles,” in this case, the metal had become overbought, and this is an important relief of bullish pressure, which serves two purposes... First and most important, it keeps this market from becoming “too hot” and creating a blow-off top. Second, this correction will create new levels of support that will become the places that the bulls defend in the future, thus ratcheting up the price as the new uptrend builds up the bulls' confidence and energy. 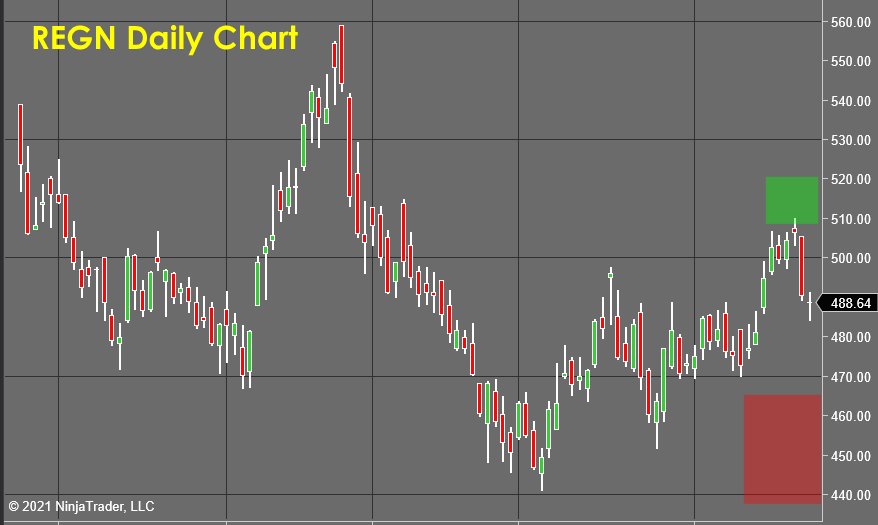 Regeneron Pharmaceuticals (REGN) took its sweet time but reached the first profit target this week. Now, as a correction forms, I’m observing my market forecasting tools to see how the bulls react.

If they begin to weaken substantially, then I would expect to see price retest last week’s highs, and that would be the end of the run for now.

Insiders at JPMorgan have come as close as humanly possible to a 100% trading record. Official documents show a 99.52% win rate for 6 years - with 3 years of ZERO down days. New research lets you "shadow" their trading desk and their awesome performance.

If, on the other hand, they continue to accumulate into this pullback by “buying the dip,” then I would expect to see the uptrend continue and would holdfast. So my management choices coming at the end of the seek that is to come will be entirely determined by how the bulls react to this correction.

The Eurodollar vs The US Dollar 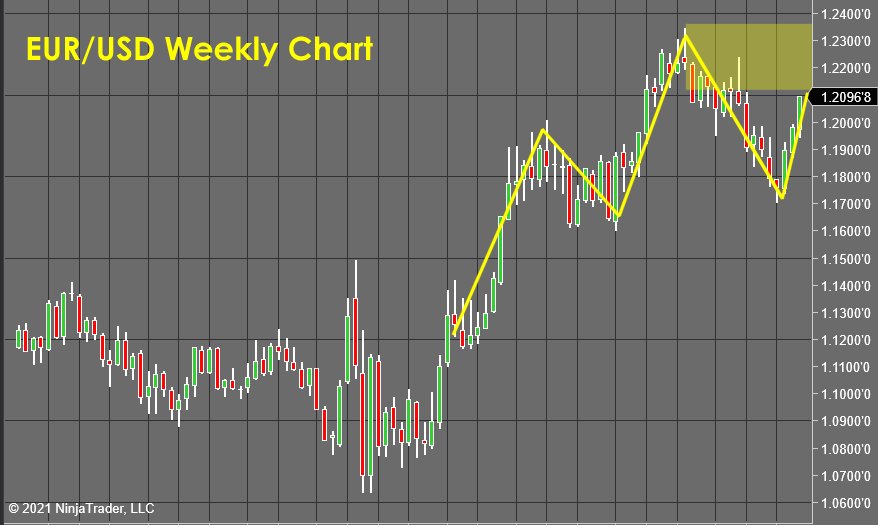 It’s been a few weeks since I did a forecast for the EUR/USD, and it’s starting to get interesting.

This currency pair has been in rally mode for the past few weeks, and the price is starting to reach up to test a broad area of resistance, as indicated by the yellow zone on the chart.

This market is poised to form a weekly head and shoulders reversal pattern, and so next week’s action will be very important for this pair. There is still a lot of bullish energy to burn off before a significant reversal can form. I will be watching the daily chart for any signs of reversal, but the odds are higher that it will take some time before a high probability entry is offered. If a multi-wave topping process can be generated in the next two or three weeks, then I would be interested in some short exposure to this market for a longer-term position.