Over the first half of 2021, the overall markets have had breathtaking moves of appreciation. The major indices are in unprecedented territory breaking through all-time high after all-time in what seems to be daily. The broader market has been in a blistering bull market for over a year straight, only accelerating since the November 2020 election cycle and really taking off into July 2021. Thus far in 2021, the S&P 500 is up over 16% and recently posted a seven consecutive positive day winning streak. The S&P 500 is up nearly 5% in the two weeks covering the Q2/Q3 junction, with its most recent run of seven consecutive days being the best winning streak since August of 2020. The other major indices, such as the Nasdaq and Dow Jones, are showing similar patterns as measured via QQQ and DIA, respectively. These markets are unrelenting and beg the question, do valuations even matter anymore?

Stocks are overbought and at extreme valuations, as measured by any historical metric (P/E ratio, Shiller P/E ratio, Buffet Indicator, Put/Call Ratio, and percentage of stocks above their 200-day moving average) or technical metric (Bollinger Bands and Relative Strength Index - RSI). Valuations are stretched across the board, with the major averages at all-time highs and far away above pre-pandemic highs.

Major influencers across the financial spectrum such as Michael Burry, Jeremy Grantham, Leon Cooperman, Stanley Druckenmiller, Jeffrey Gundlach, Kevin O'Leary, Gary Shilling, and Robert Kiyosaki are all bracing for a market crash. Collectively, they are all concerned about the rampant speculation and extreme valuations fueled by government stimulus programs.

Michael Burry stated that the markets are in the "greatest speculative bubble of all time in all things,” and speculation is happening across assets before the "mother of all crashes."

Jeremy Grantham stated that the market is a "fully-fledged epic bubble" and "When you have reached this level of obvious super-enthusiasm, the bubble has always, without exception, broken in the next few months, not a few years." Going further, "We will have to live, potentially, possibly, with the biggest loss of perceived value from assets that we have ever seen," Grantham added.

Leon Cooperman shared the same sentiments about the markets recently. "Everything I look at would suggest caution, intermediate to long term, would be the rule of the day." "When this market has a reason to go down, it's gonna go down so fast your head's gonna spin."

However, the investor indicated he would pull his cash out of equities in a matter of months. "I will be surprised if we're not out of the stock market by the end of the year, just because the bubbles can't last that long," he said.

How I Generated a 738% ROI Using This Secret Strategy

I used a version of this exact strategy to win the 2019 U.S. Investing Championship and have been teaching it to my students for a decade.

Jeffrey Gundlach stated that the stock market was "anything other than very overvalued versus history is just to be ignorant of all the metrics of valuation." He warned that stocks would fall by upwards of 15% when the downturn comes. "We'll have a tremendous unwind of a lot of the money that thinks that the stock market is a one-way thing," he said.

Kevin O'Leary that stocks would eventually crumble, "The generation that is trading right now has never gone through a sustained correction. It's coming — I don't know when, I don't know what'll trigger it, but they will learn their lesson."

Robert Kiyosaki stated that "Biggest bubble in world history getting bigger," adding "Biggest crash in world history coming." Kiyosaki has blamed the Federal Reserve for overstimulating markets and devaluing the dollar. He's advised investors to prepare for the downturn by stocking up on precious metals and cryptocurrencies.

Gary Shilling stated that financial markets would nosedive, but he declined to hazard a guess at when the crash would arrive. "I'm not making any firm prediction as to when this thing is going to collapse." He continued, "Speculations outrun any logic, and that's probably going to be true of this one." "But at some point, boy, there's going to be a lot of blood on the floor."

This is a well-versed comprehensive group of major market influencers sounding the same alarms.

As the Consumer Price Index (CPI) continues to push higher in conjunction with better-than-expected employment numbers, the Federal Reserve may be compelled to finally not only entertain the idea of raising rates but implement a rate increase. Although interest rate risk disproportionally impacts fixed-income investments such as bonds and annuities, stocks will undoubtedly be impacted as well. This is especially true for highly leveraged companies such as tech and super-charged growth companies. Even the prospect of higher rates hit the Nasdaq in March for a sharp decline, albeit that decline was quickly erased. This is a case in point of how quickly the markets can turn negative with the hint of rising rates which may be exacerbated in an already very frothy market.

Warrant Buffet coined the indicator, which is the ratio of the total US stock market valuation relative to GDP (Figure 1). The current Buffet Indicator is over 234%, currently, over 88% (2.9 standard deviations) above the historical average, suggesting the market is strongly overbought (Figure 1). 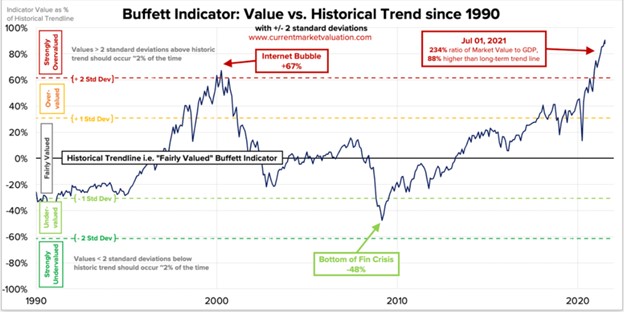 Price-to-Earnings ratios are largely discordant with the economic backdrop and at historically lofty levels. Outside of the tech bubble in 1999/2000, the current Shiller P/E ratio of the S&P 500 composite is the highest on record, exceeding that of the Roaring Twenties by a comfortable margin, currently sitting at over 38.2 (Figure 2).

All the major averages are setting new all-time highs after new all-time highs through July. Although various outlets have been beating the overvalued drum, these narratives have been noting but wrong as the markets chug higher and higher. With interest rates at all-time lows, this inverse relationship makes sense, but for how long can this persist? Once the fiscal and monetary stimulus is removed and inflation rears its ugly head, markets will inevitably turn lower. These frothy levels, as assessed by any historical metric accompanied by current technical indicators such as Bollinger Bands and RSI, suggest these markets are very overbought. Investors should heed these historical comparators as 2021 continues to appreciate at a blistering pace, already up over 16% year-to-date and leaps and bounds above the pre-pandemic highs. This astronomical rise in asset prices has some of the most influential financial gurus such as Michael Burry, Jeremy Grantham, Leon Cooperman, Stanley Druckenmiller, Jeffrey Gundlach, Kevin O'Leary, Gary Shilling, and Robert Kiyosaki sounding the same alarm and bracing for a market crash. The difficult prognosticator is, of course, the timing of when so tread carefully and remain disciplined.