This week we have a stock market forecast for the week of 7/18/21 from our friend Bo Yoder of the Market Forecasting Academy. Be sure to leave a comment and let us know what you think! 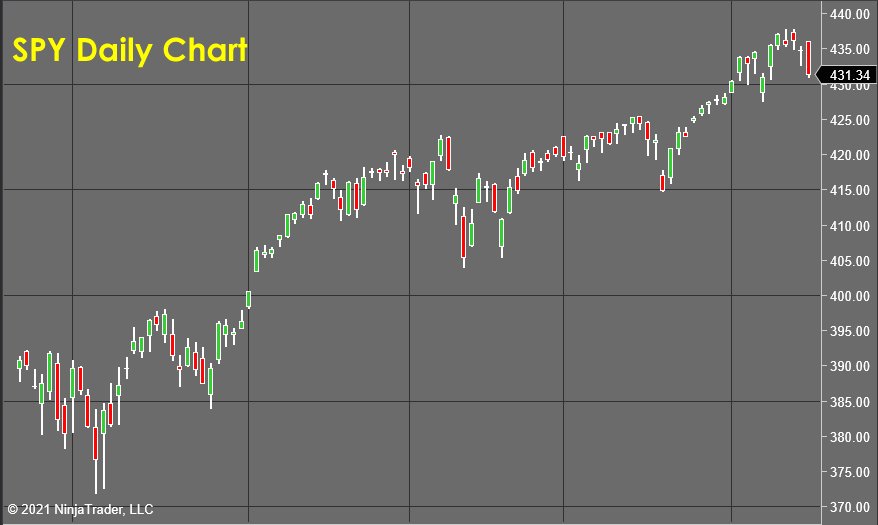 The rally in the S&P 500 (SPY) fizzled out this week as forecast, and while the forces I am able to observe and measure in the index itself didn’t collapse into bullish domination, the bears were really mauling all the potential longs on my watchlist.

I would expect to see the selling continue as a correction form but wouldn’t expect a full market break this week unless external news pounds an already vulnerable market.

This upcoming week is a “wait and see” week as the best opportunities I was able to find only carried a 60%-65% chance for success. With the likely stop losses coming in HOG and NKTR, I have used up my “aggression budget” for the time being and am gearing down into a more conservative posture. 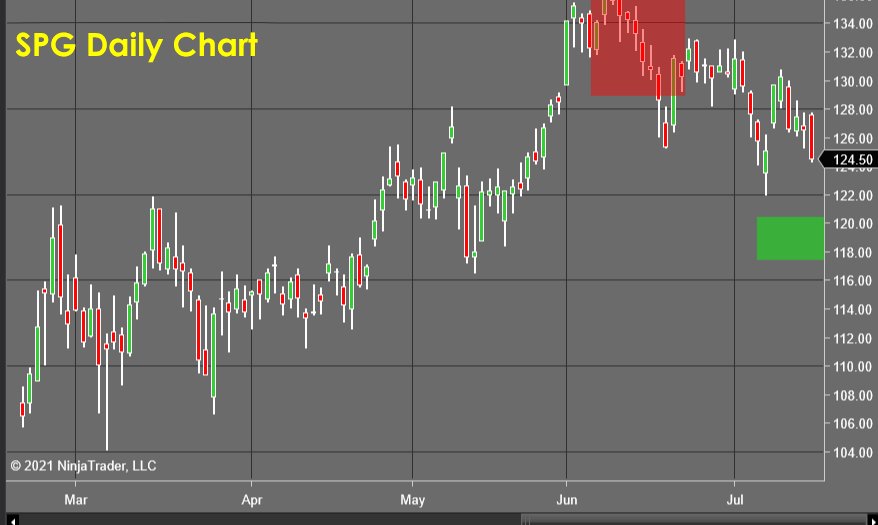 On Monday, Simon Property Group (SPG) failed to weaken substantially, so this trade triggered a scratch for a small loss. However, this is one of those times that can emotionally put a trader’s head into the blender, so it’s worth a mini-lesson.

Everything I do when forecasting is based on an objective reading of the odds.

This is the same as watching poker on TV and seeing the odds for a win displayed in each player's hand down at the bottom of your screen. Each cycle, correction, or wave pattern that a stock produces is similar to having a new community card dealt in poker.

Once the cycle is complete, I can take another objective reading (just like the poker players)... and determine how the odds have shifted either for me or against me.

It takes no skill to manage open positions when the odds are obvious... However, when things are a lot more ambiguous than it's time to get more nuanced and tactically strategic.

In SPG, I was just forecasting a down cycle I was trying to capture that limited profit opportunity. Therefore I am less willing to let the stock misbehave because I don't have as powerful a foundation in trend to ensure the success of the forecast.

One important shift in perspective that must be made if one wishes to switch from gambling amateur to consistent professional is to stop worrying about profits. Instead, your focus should be on finding trades that are unlikely to lose you money... and with that perspective shift and focus on process; profits are an inevitable byproduct of the math of profitability.

I understand fully that this seems like an inconceivable statement for someone just starting out with stars in their eyes and greed in their belly, but those “money chasers” either blow up, flame out, burnout awfully quickly as their ceaseless chasing of profits turns a blind eye to portfolio risk, risk management, and mitigation.

The same way that I could foolishly and aggressively offer five new forecasts this week, all with mediocre chances for success... just to “stay active,” these traders feel like activity equals profitability.

In reality, when you've seen as many trade logs as I have over the last 20 years, you start to realize that there is a distinct pattern... Those who are the pickiest pick up the most profits.

Because the real game in trading is NOT finding money and creating profits, it's KEEPING those profits and not giving them back to the market.

So when you see me get passive and withdraw from the markets, it's usually because the odds have dropped down below 70% to 80%, and it’s simply not worth the bother to flip coins when there is something as serious as my livelihood on the line. 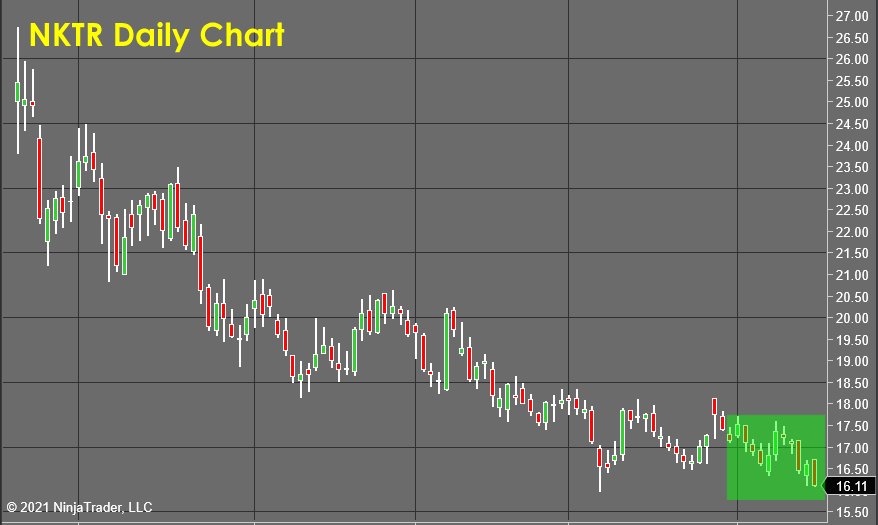 Nektar Therapeutics (NKTR) was a lower probability (65%) trade with huge profit potential, and at the close of the week, it sure looks doomed….However, no trade is done until it’s exited, so I will force this to trigger stop losses below the $16 per share area.

I'll never forget an iconic trade I took in Procter and Gamble early on in my career. I entered the trade, put the stops below the lows, and immediately enjoyed a rally up for a 6% gain. Unfortunately, the market then topped out and began to fall off badly.

I lost all of my open profits, then started to take some heat as the price broke down below my break-even level... The bears dominated that stock all the way back down to the lows.

I remember feeling so terrible, as it seemed inevitable that this trade was going to stop out for a loss, and I was constantly recriminating myself as I second-guessed my choice not to take profits “when I had them.”

As you probably already suspect, there was no real evidence for me to make an exit decision on, and in fact, all the signs pointed for a long sustained rally to the upside, so I did the right thing. As a result, the price came within 3 pennies of my stop loss level, reversed, and began to rally like a rocket launched at the moon.

It delivered a strong double-digit gain for me and has always acted as an iconic lesson that I recall any time I'm feeling an emotional pull towards taking an impulsive action that is not based on the odds or any other hard data.

In the beginning, you connect your ego and self-worth to the success or failure of your trades. This is emotional suicide as it creates tremendous psychological pressure, leading to impulsive and emotional actions. Once you can become truly detached and literally care nothing about whether an individual trade succeeds or fails because you are so hyper-focused on the long-term results that you intend to achieve…Magic happens, and everything starts to produce in a cyclical and consistent manner.

These are just the sorts of lessons that I find have the most impact on traders' results once they master the basic technical skills of our proprietary market forecasting process, which we teach at Market Forecasting Academy. Like so many things in life, trade management is one of those “80/20” things, where 80% of your profitability and consistency comes from your consistency in execution, whereas you probably spent 80% of your focus on the technical aspects of the tactics and strategies which in reality only produce 20% of your true profitability. 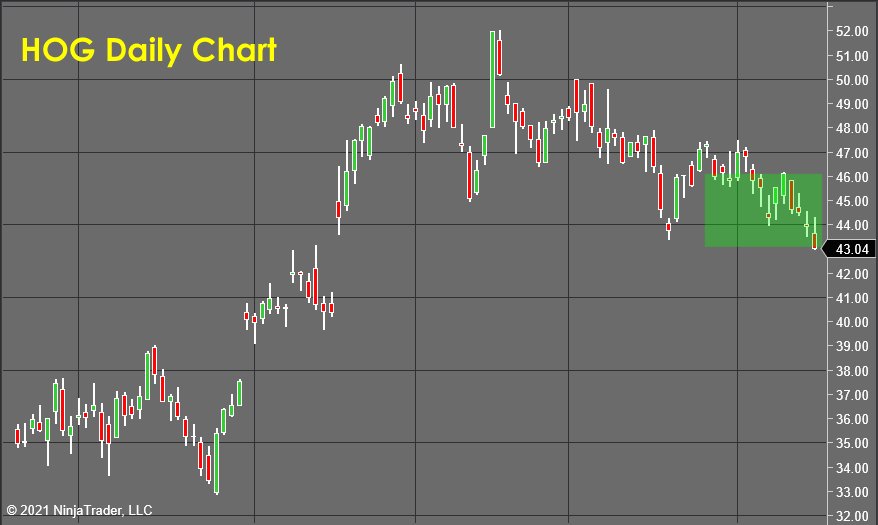 Harley-Davidson, Inc. (HOG) was one of the nicest patterns I have seen on the long side in a while, and like watching a piece of artwork get vandalized, the fact that it gave up the ghost so easily makes me sad.

But to circle back to the poker analogies I wrote about earlier, it also makes me sad when I go “all in” with a pair of kings, and the only person to call turns over a pair of tens. Then proceeds to hit a 20% chance to get a final ten on the river to take all my money!

In both cases, the correct play is to move on without angst because you did the right thing based on the mathematics of odds when you had a choice in the matter.