Back in May, I talked about my reasons why everyone should own a little Bitcoin (BTC).

Since then, BTC has been on a wild ride, to say the least!

But the factors I talked about in May are still at play. That’s why today we’ll do a much-needed update on why Bitcoin and why it should still be a part of just about everyone’s portfolio.

Before we get into what’s happened with Bitcoin recently, let’s take a step back.

But beyond these similarities, Bitcoin and your bank account are pretty different. In order for your bank to function on your behalf as either a method of exchange or a store of value, it needs to sign off on your account’s value and existence. You also have to rely on the bank’s computers to make sure your money is safely guarded.

Not so with Bitcoin. Bitcoin exists in a ledger that is housed on an array of computers, each independently maintained and secured. These computers all have their own copy of the ledger. So when you want to transact business with your Bitcoin, you don’t have to get anyone’s blessing, like a bank. All you have to do is to execute the transaction with the party you’re doing business with and make sure it’s recorded on the ledger. And when everyone on the blockchain looks at their copy of the ledger and says your transaction is ok, the transaction is added to the blockchain, never to be changed or altered. This ledger technology also uses sophisticated puzzles and cryptography to keep the blockchain secure.

If you want to learn more, check out my 2021 Guide to Cryptocurrencies, Part 1 and Part 2.

Unless you’ve been under a rock, you most likely know that Bitcoin hit a record high of $63K in the spring and then promptly managed to lose half its value over the next few months.

Why such a drop? No one knows for sure. Maybe it was China’s stance toward crypto. Maybe it was Elon Musk. Maybe it was the general uncertainty about regulation, blockchain technology, and security.

But by the middle of July, the biggest crypto out there started to show some life and quickly rose to $52K in early September. Take a look for yourself... 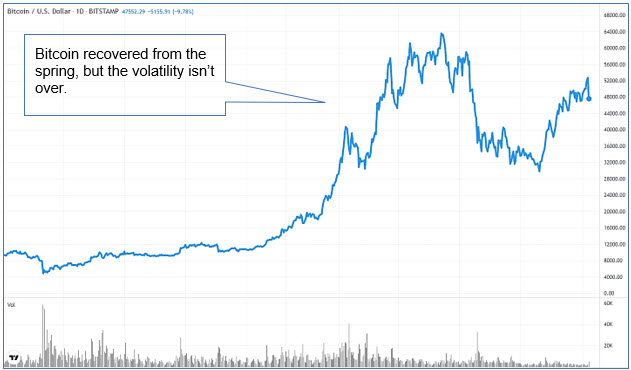 So, why the ups and downs? The answer is pretty simple: Because Bitcoin is a new asset in a new marketplace with tons of uncertainty pelting it from all sides. And unlike other, more mature and familiar assets like stocks, Bitcoin is particularly sensitive to speculation, fear, and uncertainty. Fundamental forces – like those I mentioned above – certainly play a role. But for the foreseeable future, those forces will be drowned out.

Does that mean Bitcoin isn’t worth the risk and hassle? Not by a long shot. Volatility is inherent in new, unproven assets. In fact, if you look at a chart of Amazon (AMZN), when it began to take off around 2013, it was by no means a smooth ride. But today, in my book, it’s one of the best companies on the planet.

Bitcoin is still the big boy on the block. Here’s the latest heatmap by market cap... 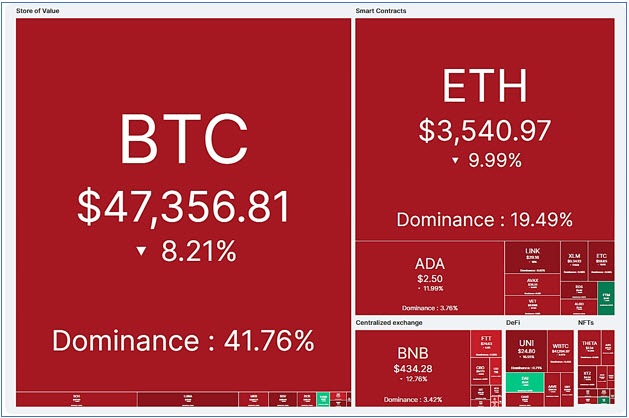 As you can see from this heatmap, at $47, K Bitcoin dominates the marketplace. In fact, it has over two times the market cap of its nearest rival, Ethereum (ETH). Moreover, the small size of its other competitors – clearly shown in the relatively small squares and rectangles above – illustrates how that dominance gets even greater the farther you travel the food chain.

So, is bigger necessarily better? In this instance, yes. That’s because Bitcoin’s history in blockchain and its 42% share makes it a front-line pioneer in a marketplace. And like most marketplace pioneers with large market share, Bitcoin pretty much calls the shots for the whole market.

So, if you want to be in the market, you have to be – at least a little – into Bitcoin.

But that’s not all.

Bitcoin is also the centerpiece of blockchain, which is already in the midst of transforming everything we do. From smart contracts to business models to stores of value, blockchain will reshape our lives, unlike any technology we’ve ever seen.

But you don’t have to take my word for it. In last week’s article, I did a deep dive into the 2021 Blockchain Survey by consultancy giant Deloitte. And among the bombshells, the report dropped were the facts that most executives believe the blockchain will overhaul of the entire financial ecosystem AND that blockchain will do away with fiat currency within 10 years. And those are just the headlines!

So, if you want to be a part of that transformation, a good place to start is Bitcoin.

That said if you’re going to take the plunge into Bitcoin, don’t put aside more than 1% to 2% of your portfolio. That will give you enough exposure to stay involved, but not so much that it will keep you up at night. And that 1% to 2% is the sum of all your crypto, not just BTC.

And remember: The volatility swings that we’ve seen in Bitcoin over the last few months aren’t going away. They will be a part of a Bitcoin investor’s life for a long time to come. That’s why if you’re going to buy Bitcoin, do so for the long term. And don’t get jerked around by the fluctuations by looking at daily prices. I know that’s a hard task, but a necessary one.