The price of Bitcoin has built two large legs down that perfectly fit the slightly up-sloping trend channel (orange). It means these legs are equal in size. It is a good sign as we could consider the large consolidation as completed then.

Since January 24, 2022, the sharp move up advanced rapidly to hit the new high of $46k last month, breaking above the earlier minor top established on January 13, 2022, at $44.5k. However, despite such good progress, that move could be just a “dead cat bounce.” Later last month, the strong collapse almost proved that. However, it turned out to be a deep retracement as there was no new low.

The bullish setup has emerged after a minor spike from $34k up to $40.3k has been followed by a tiny consolidation between $40.3k and $37k. The buy trigger at $40.3k was activated yesterday when the price of Bitcoin has rocketed beyond it. The confirmation level is at the top of $46k.

The RSI has turned bullish again after a deep correction.

The all-time high of $69k is the minimum (conservative) target as the price should at least retest it to either be rejected there or break the barrier. The invalidation level is located below the valley of red leg 2 under $32.8k. The risk-reward ratio of this setup stands at a good level of 3.8 with a conservative target. Later we will be able to update the target upon the visible progress of the price to the upside. 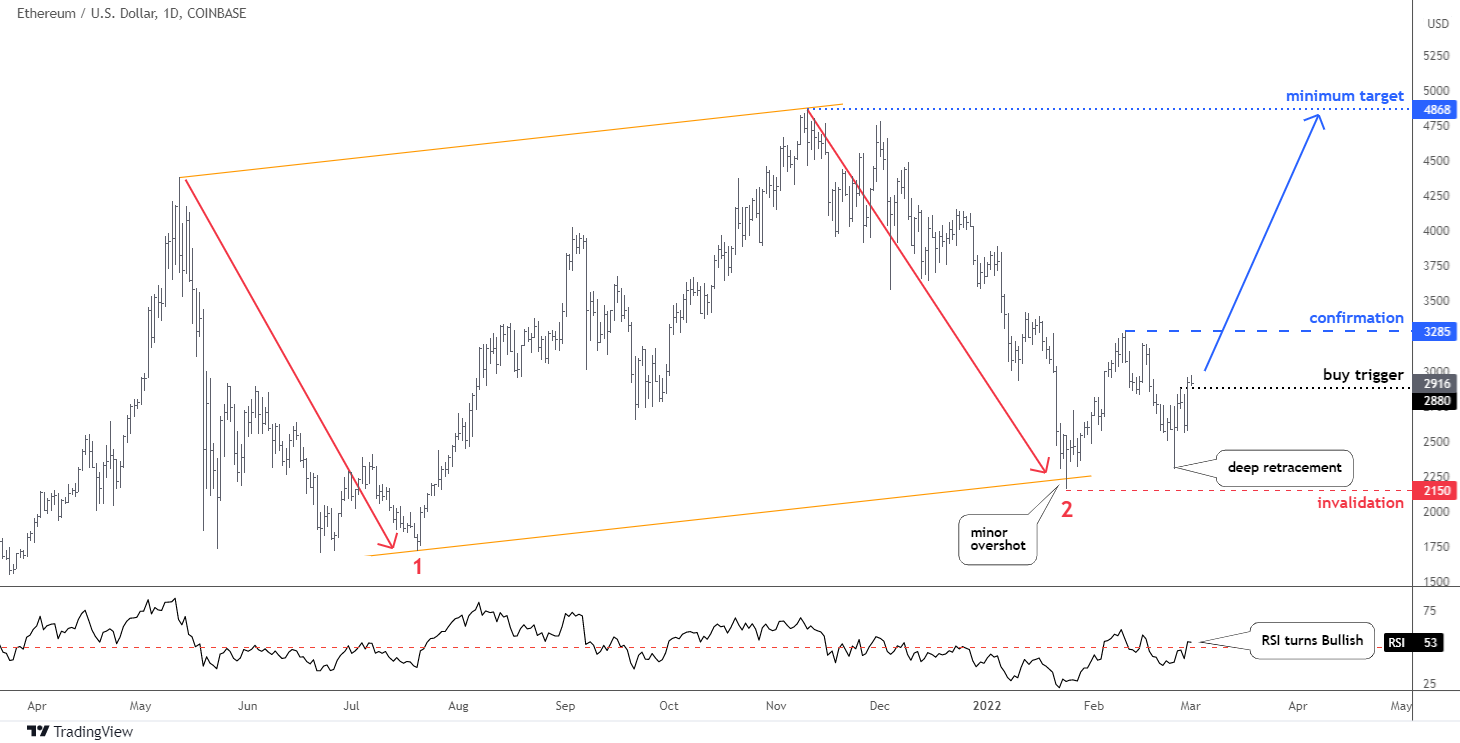 Ethereum lags behind Bitcoin, as you can see in the chart above.

The chart structure looks similar to the Bitcoin chart. We have two red legs down either, although the second leg down has slightly overshot the size of leg 1 as the price punctured the orange channel.

The strong move up after the leg 2 down did not break above any preceding minor peaks as it stopped at $3,285. That move has been retraced quite deeply, the same as in the case of Bitcoin. The valley of leg 2 in the area of $2,150 has been kept untouched.

The buy setup has been built the same way here. We have got a minor spike up to $2,880, which was set as a bullish trigger. It was followed by a tiny correction. Yesterday, the price of Ethereum crossed over that trigger. The impulse was not as strong as we saw in Bitcoin. The “watch and catch-up” mode could be the reason for this lag as investors observe Bitcoin’s behavior first to plan actions in other cryptos.

The RSI has entered the bullish territory.

The all-time peak of $4,868 is the minimum (conservative) target as the price should at least revisit the record high, either to “fly” or “die” there. The invalidation level is located below the valley of red leg 2 under $2,150. The risk-reward ratio of this setup is less than for Bitcoin at 2.7, with a conservative target. Later we could update the aimed area.