One of our readers requested the update on cryptos, including Ethereum, this week. Here we go.

The leading coin has taught us excellent lessons recently. I shared with you a bullish setup for Bitcoin a month ago. In the following update, I recommended to move the stop loss higher from $50k to $55k area to cut the risk after the breakout and increase the risk/reward ratio to sound 2.7.

The price indeed broke above the confirmation level of $61782 and quickly reached the new all-time high in the $65k area, but then it failed to advance. 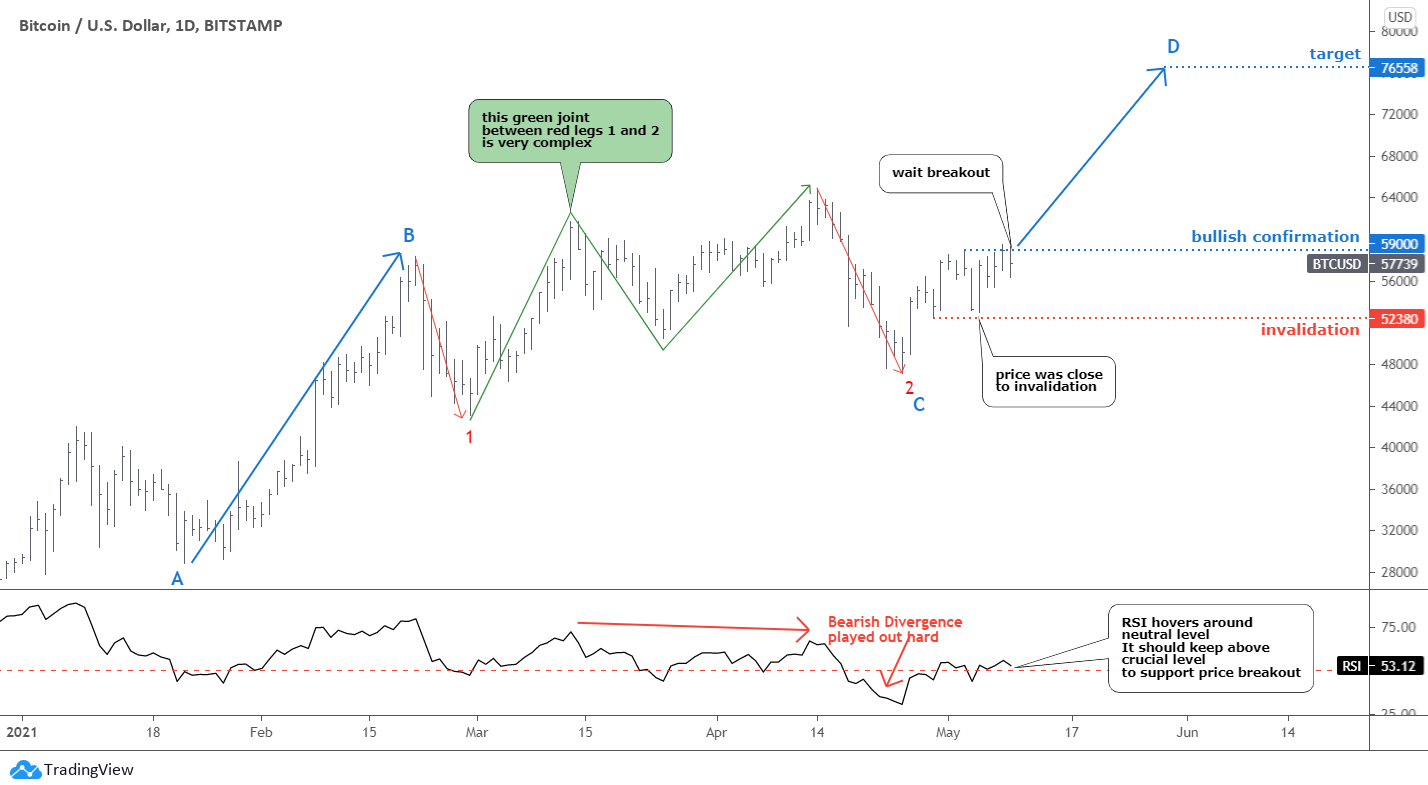 We have the first lesson here from the RSI. As we can see on the sub-chart, the indicator did not confirm the new all-time high as it established a lower peak instead. This built the Bearish Divergence then, and the outcome you already know, the price collapsed dramatically. END_OF_DOCUMENT_TOKEN_TO_BE_REPLACED

While the price of Bitcoin has been nothing more than incredible over the past year and completely blown me away, (and certainly proven me wrong a number of times when I have in the past stated that I did not think Bitcoin or any cryptocurrency was a "wise" investment), a new warning sign has made waves in the cryptocurrency industry and markets.

The warning comes from Coinbase prior to its upcoming initial direct listing, a different version of an initial public offering. In the report released by Coinbase for potential investors, the company listed several potential risks to its business. This is very common with public companies, even well past the time they have gone public. However, this is the first time we have seen these warnings from Coinbase, which generates the vast majority of its revenue from the trading of Bitcoin and Ethereum.

These risk factors include "disruptions, hacks, splits in the underlying network also known as 'forks,'" as well as developments in quantum computing and regulation that affect cryptocurrencies.

"The future development and growth of crypto is subject to a variety of factors that are difficult to predict and evaluate," the filing read.

Furthermore, the filing also mentioned "the identification of Satoshi Nakamoto, the pseudonymous person or persons who developed bitcoin," as a potential risk factor. It mentioned the transfer of Nakamoto's bitcoins, which some believe is worth around $30 billion. Bitcoin bulls fear that if Nakamoto is identified, it could harm bitcoin's decentralized nature, reputation, and overall security. END_OF_DOCUMENT_TOKEN_TO_BE_REPLACED

We hope you enjoyed the brief holiday break… it seems Bitcoin has been busy while the markets have been resting! Bitcoin enthusiasts are adamant that the price rally has just started a parabolic move higher. From a technical standpoint, this current rally certainly appears to have gone parabolic. As any trader already understands, what goes up may eventually come crashing downward.

My research team and I believe failure at the current highs would represent a clear technical divergence pattern between price and the RSI indicator. Additionally, the current rally that started on December 20 consists of a $10,850 rally phase. The previous rally from October 20 to December 2 consisted of a $9,200 rally phase. We believe this current rally phase from December 11 could be a Wave 5 rally (almost equal to the Wave 3 rally range). If our researchers are correct, this final rally phase could come crashing downward after reaching these peak levels above $28,000.

This 4 Hour Bitcoin chart highlights the incredible price rally that has taken place over the past 16+ days – a rally of over $10,000. It also highlights two very clear price rally phases – creating an A-B-C price wave pattern. 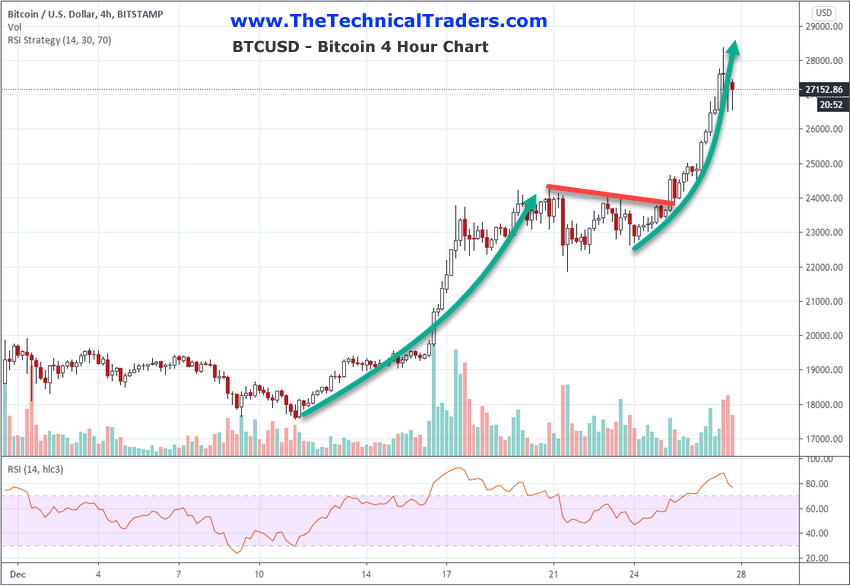 This Daily Bitcoin chart highlights the two, almost identical in size, which has created a price peak above $28,000. It also highlights the technical divergence between price and the RSI indicator in the lower pane. END_OF_DOCUMENT_TOKEN_TO_BE_REPLACED

If you recall, it was around this time a few years ago, 2017, when Bitcoin became a household name and went on the tear from under $1,000 per coin to more than $17,000 per coin in under one year. The mania of the move came in the latter part of the year and right between the holidays. Fast forward a few years later, and Bitcoin has once again made a surprising move in the latter half of the year and once again set all-new record highs.

I have long been bearish on Bitcoin, but over the years and recent months, I have begun to move more toward the middle in terms of Bitcoin bulls vs. bears and why I have moved towards the middle what I would like to explain today.

My biggest and main issue with Bitcoin from the time I was introduced to it in 2013 is that, like other precious metals, they have no real intrinsic value. Therefore, you can't accurately or even inaccurately value the asset. With that being said, I have never invested in gold, or diamonds, silver, or any other metal, unless you are like my wife and consider "jewelry" an investment. I don't invest in any of them because they aren't like stocks that have value based on what the company plans to do or how much cash they have in the bank. I can value stocks and determine if they are under or overvalued by the market.

Precious metals, like Bitcoin, you can not do that because these things are only worth what they last traded for or what one person or another somewhere in the world is willing to pay for them at this moment in time.

And none of that has changed.

However, in the past few months, we have seen END_OF_DOCUMENT_TOKEN_TO_BE_REPLACED

MarketWatch used to pick up my posts on rare occasion but has not done so for a long time. Maybe they think I make fun of some of their articles or something. I don’t know what would give them that idea. I actually find MarketWatch useful in ironic and non-ironic ways.

But anyway, this morning an article tags along with the recent near-deafening Bitcoin noise…

6 reasons are given for Bitcoin’s re-found popularity. They are the usual pap, including a Dollar/Gold rationalization.

“Bitcoin as a form of digital gold is also seeing its time in the sun as we see the floodgates open on monetary policy. Closing the sluice gate is more difficult than opening it,” Charles Hayter, founder and CEO of CryptoCompare, a company engaged in bitcoin data and analytics, told MarketWatch.

Bitcoin is not a form of digital gold. That is one of the zaniest things I’ve ever seen in print. I am admittedly an old fashioned gold valuing curmudgeon. But in my opinion, Bitcoin is a digital concept; one that I think can be controlled or co-opted by governments more readily than the gold buried in the woods behind some crusty old bug’s shack (to boot, the digital kids are not guarding their hoards with physical shotguns, just maybe virtual hacks or viruses).

It was time. Bitcoin is having its technical day in the sun and only this week hit the target NFTRH has had for it since early 2020. Due to nutty rationale like the above and the weight of momentum-fueled money starting to pile in, not to mention an overbought reading on this weekly chart, I think it can pull back here. Possibly to support at the 12500-13500 level. END_OF_DOCUMENT_TOKEN_TO_BE_REPLACED