Today’s fuel prices are showing us that with increasing demand, the price for refined products will continue to rise, even with a somewhat stalling crude oil price. Today’s EIA posting for On-Highway Retail Gasoline price was $4.107 per gallon. Remember, in 18 states, beginning this Saturday; the US EPA has mandated the more expensive “Summer Blend” of gasoline. This gasoline blend will stay in place until Mid-September, as demand remains strong and the temperatures are warmer this time of year.

Diesel prices look to be outpacing gasoline and the changes in crude oil prices as well. Monday’s EIA posting for On-Highway Retail Diesel price was $5.16 per gallon. These prices will soon eclipse the records we saw in March of this year. We were trading at $5.25 per gallon on March 14, 2022, and with diesel fuels' current supply issues, we will top this by Mid-May. This will push food prices higher and make planting time in the Agriculture space as expensive as it ever has been!

We’re still on an upward track on fuel prices! 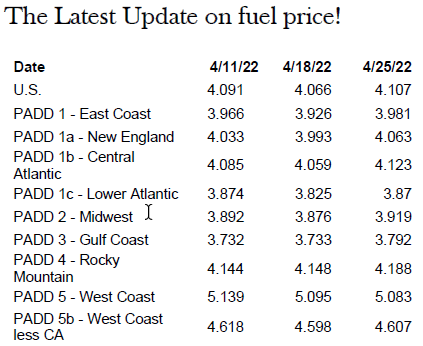 Putin says We will Stop Sending Natural Gas to Poland and Bulgaria, But Why?

President Joe Biden announced, back in March, that the U.S. would no longer purchase any crude oil that comes from Russia and leaned on NATO to do the same. This morning, the Kremlin announced that Russia would suspend its sales of Natural Gas to Poland and Bulgaria. Wait, what? Didn’t those nations commit to no more Russian oil and gas purchases anyway? It was supposed to be a moral imperative. Isn’t that why prices spiked? Now it’s Russia’s idea, and everyone is complaining?

Then yesterday’s revelation that the Biden Administration had asked the Germans, through back-channel messenger, to do what they could to not begin their boycott of Russian crude oil and natural gas until after the U.S. Mid-Term Elections. This may explain why this president’s approval ratings are so low. You just can’t play the American people and think we won’t figure it out.

The President said, “I want to limit the pain the American people are feeling at the gas pump. This is critical to me,” he said. The only problem with this statement is the actions the administration has taken so far have been a step in the wrong direction and always a day late. That’s not leading; it’s following!

This administration has done everything to destabilize U.S. energy markets and has served to provide a significant disincentive for producers to pump more crude oil and natural gas. All while telling the world that the US is leading the charge and directing NATO on its geopolitical moves. Except, this isn’t true. Apparently, the world isn’t buying the U.S. Line.

To regain control of our economy, we must first address the leading inflationary items, like fuel. Next, increase our crude oil production and, at a minimum, 1.75 million barrels per day in the US, then watch the US and world economies begin to settle back into a groove and breathe easier.

A secure nation comes from a secure energy policy to protect and rebuild our growing U.S. economy! Crude oil provides this security. 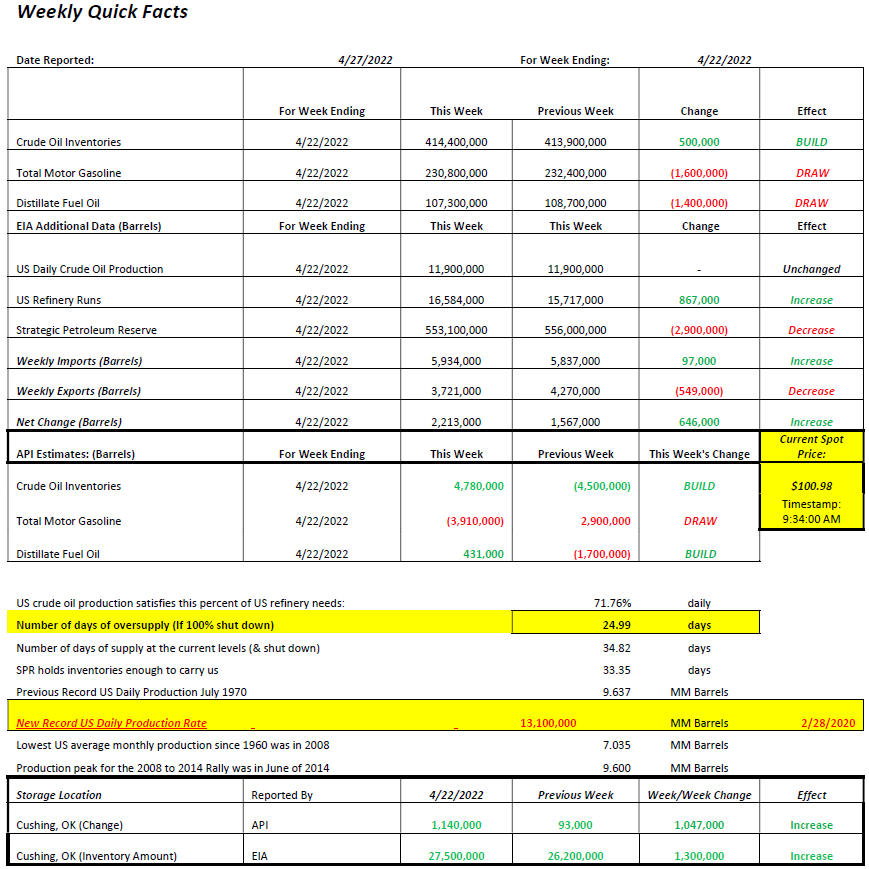