There’s no doubt about it: Tech stocks have taken it on the chin lately. In fact, the tech sector (NASDAQ) is down 22% since the beginning of the year. That’s a terrible start to the year, no matter how you slice it.

And inside tech, there’s nowhere to hide. Even the biggest and brightest are getting hammered. See for yourself: 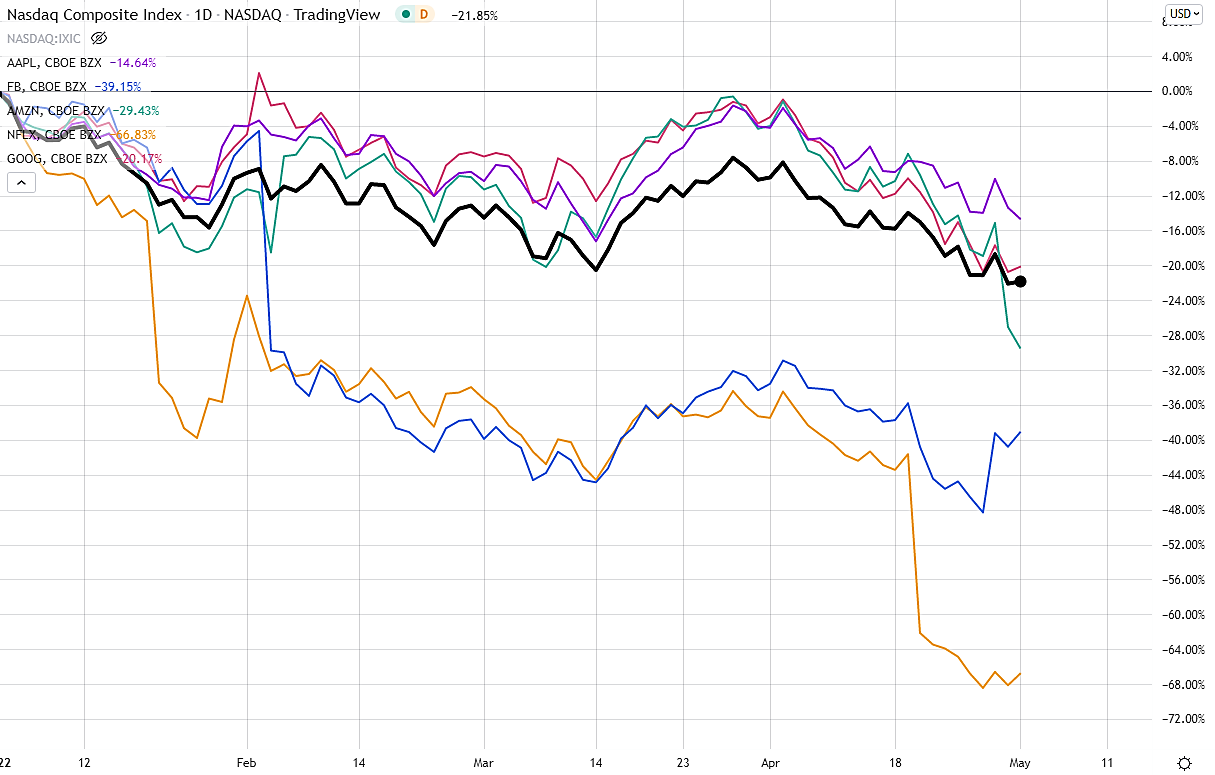 This chart shows the year-to-date performance of the stars of tech, the so-called FAANG stocks. The acronym stands for the five prominent players in tech, including Meta (FB), Amazon (AMZN), Apple (AAPL), Netflix (NFLX), and Alphabet (GOOG). Included in the chart is also the performance of the NASDAQ. (Apple was originally excluded from the FAANG club but was added in 2017).

The details are gruesome. Since the beginning of the year, Meta is down 39%, Amazon is down 29%, Apple is down 15%, Netflix is down 67%, and Alphabet is down 20%. All told, those are bone-crushingly bad numbers.

Here’s Why Tech is Getting Hammered

So what’s up with tech?

There are a couple of factors at play here. Drilling into tech itself, the sector is coming off a nice run since the lows of the pandemic and is now getting sold.

Here’s what I mean: After the initial shock of dealing with the pandemic, consumers and businesses alike adapted and began buying. And tech was a big beneficiary of that significant adaptation in spending. In fact, if we recalibrate the above chart to begin in 2020 and end in December of last year, the tech story is bullish. 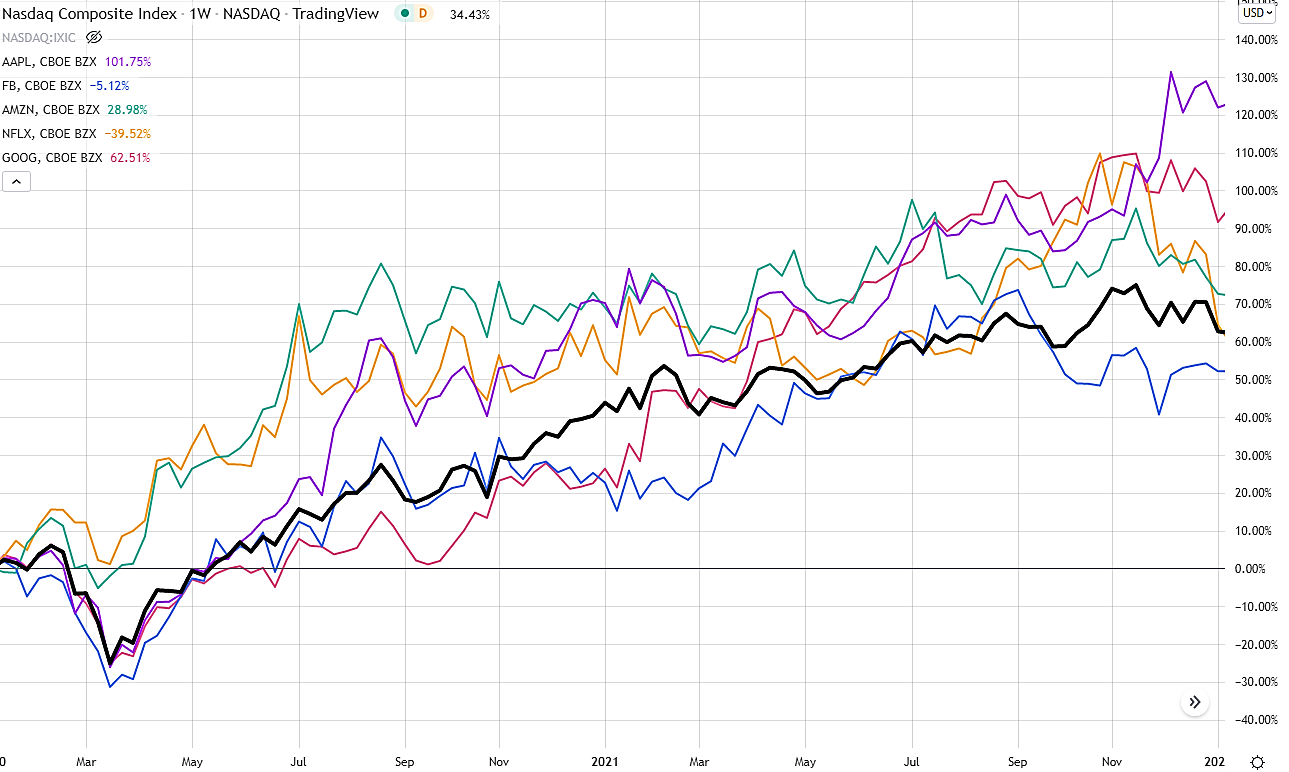 As you can see from this recalibrated chart of the tech (NASDAQ) and the FAANG stocks, between 2020 and 2021 if you were involved with tech in general, and any of the FAANG stocks in particular, you were sitting pretty. In fact, the gains for the period ranged from around 50% to over 120%. Not too bad for a couple of years’ work.

But the party didn’t last forever. Hence, the recent selloff.

There’s another reason for the selloff in tech: Investors are trying to figure out how to price these big tech companies with streaming services components. In the past, investors enjoyed the steady march of higher subscriber numbers and easily deepening market share. Now there are more streaming vendors in the marketplace, and the pioneers are beginning to feel the market share pain. The recent selloffs in Netflix (NFLX) and Disney (DIS) are just two streaming-driven disasters that come to mind. And while this streaming shake-out is not surprising, just about every maturing market goes through it; it's likely not over. In fact, until investors decide on how they’ll value this part of the sector, it’s going to be a rough go.

Another reason investors are hammering tech is that technology companies are still widely viewed as a risk-on play. That means that in exchange for higher growth rates and escalation in share prices, investors are willing to swallow more risk. Hence the term “risk on.” And so long as investors feel secure in the way the markets and the economy are behaving, they’ll happily make this risk on the trade, accepting the higher share prices for more risk.

But right now, investors are worried that the markets and the economy are not going as swimmingly as they once were. And because of that, they’re selling their risk on assets and keeping those with lower risk profiles.

So, what’s causing investors to be so worried? You can take your pick. As I talked about in my inflation issue last month, the convergence of supply chain problems and covid issues in China, among others, are causing record-breaking inflation. And that higher inflation means that investors are paying more for what they need to conduct their lives and businesses. And because inflation is so dramatic right now, that has them worried.

Another huge factor: Tech is getting swept up in the selloff in stocks in general. In fact, if you add a chart of stocks (SPX) to the year-to-date chart of tech (NASDAQ) and the FAANG stocks, you’ll clearly see that stocks have been sold off since the beginning of the year along with just about everything else.

Also at play: A growing fear of a recession and the war in Ukraine. And while geopolitical forces tend to work themselves out over time, right now, we’re in the midst of it. And as a result, investors are selling.

Here’s What to Do

So, what are we to do? Well, here’s what I do: Provided I’ve followed my golden rule and bought good companies in solid markets that have strong upside (my golden rule), I wouldn’t be liquidating any positions. Eventually, good companies with strong fundamentals will win out. That said, I also wouldn’t be adding any new positions right now or adding to existing ones. The outlook is simply too uncertain.

And as far as crypto is concerned, I’d stay the course as well if I’ve bought the leaders like Bitcoin (BTC) and Ethereum (ETH). But here as well I wouldn’t be adding any new positions. And like always, I wouldn’t devote any more than 1% to 2% of my portfolio to crypto.