The soybean futures price hit an all-time high of $17.89/bushel in September 2012. After that, it started to collapse in several legs to the downside, losing half of its price by September 2015.

The spike in 2016 was short-lived, as the soybean futures had dropped again to establish the valley in 2019 at $7.91/bushel. Shortly after, the price had reversed to the upside and rallied to a peek last year at $16.675/bushel.

The recent price movement established the substantial "cup" of the pattern (blue). The following correction (orange) of the price has been relatively small compared to the cup. This correct creates the "Handle" part of the chart pattern. The handle bottomed just below the 50% Fibonacci retracement level at $11.845/bushel, and the price has spent the most of last year in the handle.

This year, the soybean futures price pushed over the handle in to break above the main trigger located at the right top of the cup at $16.675/bushel. The rapidly growing volume has supported that breakout. It is an excellent bullish sign.

The target for this pattern is computed by adding the height of the cup to the trigger point. This target is located at $25.44/bushel, a +46% gain from the last Friday's close.

The invalidation trigger is located in the valley of the handle, below $11.845/bushel.

The same Cup & Handle pattern shows up for corn futures. This time, the model looks smoother as the rounding bottom of the cup (blue) has no such sharp bounces as we saw in the soybean futures. 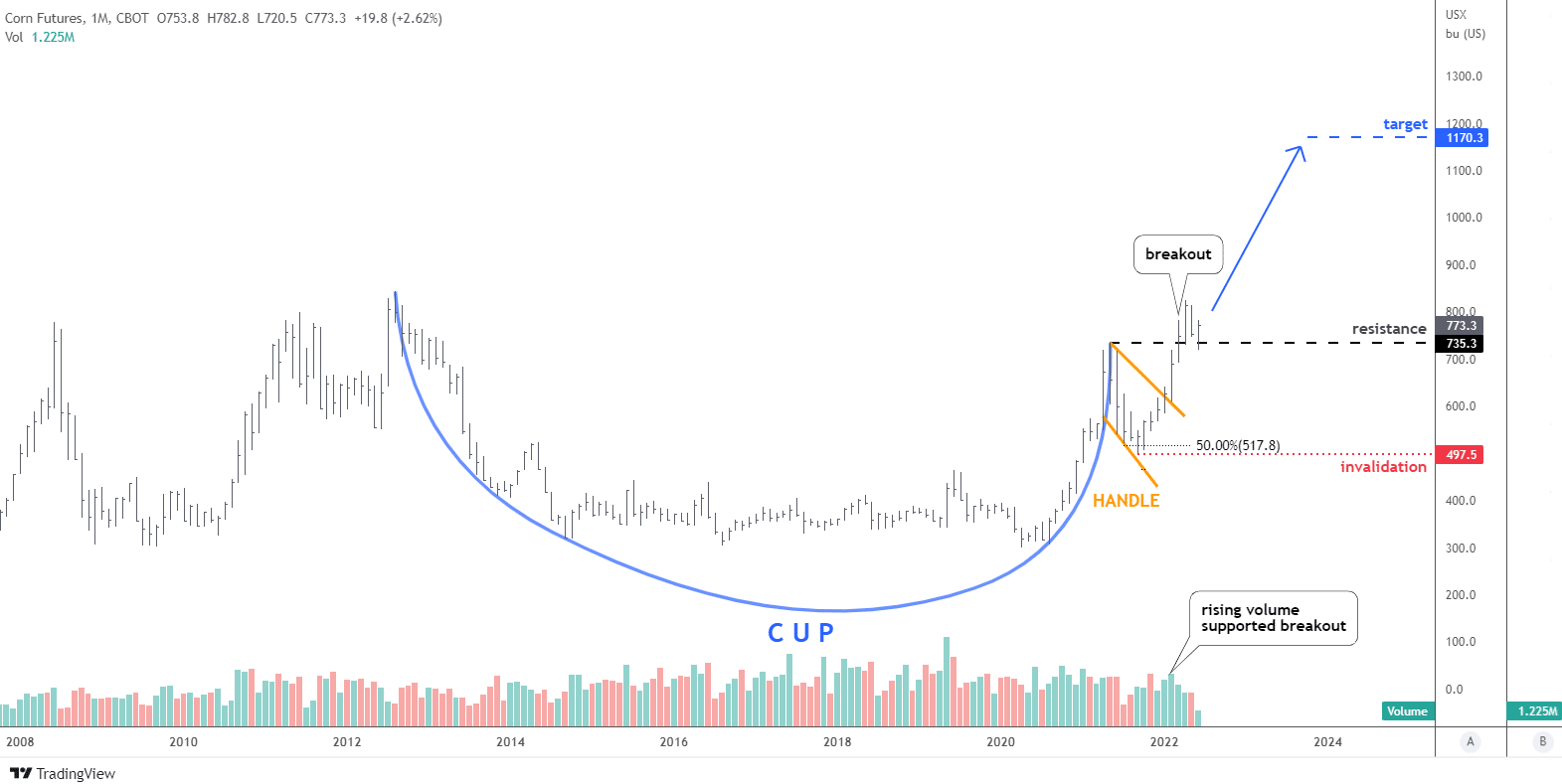 The cup established the valley later than the soybean price movement. The price reached the minimum at $3.03/bushel in April 2020. The right top of the cup at $7.353/bushel is lower than the left side ($8.438/bushel).

The correction stage within the handle (orange) also bottomed below the 50% Fibonacci retracement level at $4.975/bushel. Although, it looks not as sharp as we saw it in soybean futures as the orange trendlines diverge did not converge.

The bullish move in corn futures at the start of this year has been even stronger as the price rallied both over the handle and over the trigger of $7.353/bushel. This huge move almost hit the all-time high of the left peak of the cup. The rising volume has confirmed the actual demand in the market.

The profit target for the pattern is at the height of the cup in addition to the trigger point. This mark is at the $11.703/bushel mark, which means +51% gain from the last Friday's close.

The invalidation trigger is in the valley of the handle, below $4.975/bushel.

The projected rise of these agricultural futures means food inflation would persist for longer. The global inflation signal also comes from the bullish oil chart (main driver of inflation) and the bullish gold chart (a hedge against inflation).

I'll keep looking for these technical patterns, so please visit back for my next analysis!