The non-farm payrolls report released last Friday dropped a bombshell on the market, revealing the US economy added 517K jobs in January 2023, surpassing expectations of 185K and the highest since July 2022.

This was a real shocker that caused huge, unexpected waves of volatility in the markets. Let’s have a look at 1-day futures performance last Friday in the diagram below. It looks like a red sea with a small island covered in green grass. 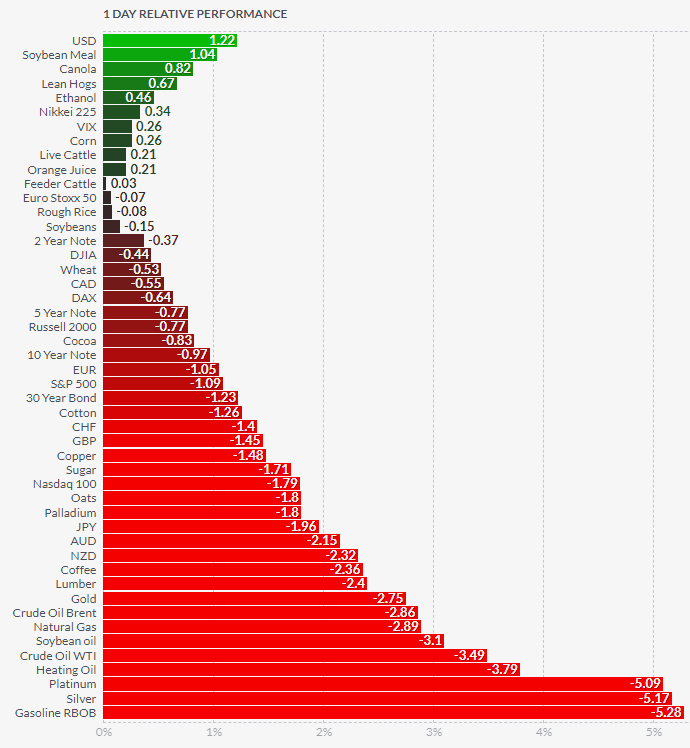 Gasoline, silver and platinum were the ultimate losers that day with massive losses of -5.3%, -5.2% and -5.1% respectively. Gold futures lost huge -2.8% as well. Palladium futures price plummeted -1.8%. Among metals, Copper futures were the most resilient at -1.5%. END_OF_DOCUMENT_TOKEN_TO_BE_REPLACED

The global stock market's market distortion was revealed last week. Let me share it with you in visual form below.

The first chart above depicts the price dynamics since September 2010. Over this long period, the US stock market has outperformed both the global market and the rest of the world.

Smart money waits for a market crash before adding or purchasing stocks. In this regard, I've created a new chart below to show how these three instruments have performed from the deep valley in 2020 to the top of 2021. END_OF_DOCUMENT_TOKEN_TO_BE_REPLACED

Last week, crypto enthusiasts got a boost when the crypto market cap almost reached the mark of $1 trillion, the highest level since last November.

That very month, I shared with you the bullish signal in the Bitcoin chart I spotted then. It was a Bullish Divergence on the weekly chart of the main coin.

Below is the distribution of your opinions on that bullish alert.

The "I am Bearish" option had gathered the most votes. The second largest bet was to see Bitcoin bounce back towards its prior consolidation area at $30-$35k. The price of digital gold was $16.5k at that time.

Before we check what happened to the price of Bitcoin since then, let us review the major crypto market. 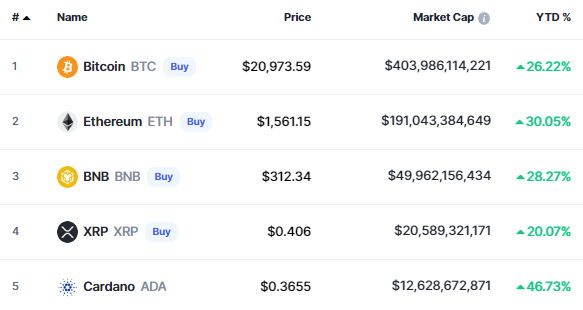 These are the five largest cryptocurrencies in the table above. Top coins are monumental at #1 Bitcoin with gain of 26% year-to-date (YTD) and #2 Ethereum with profit of 30% YTD. Binance’s native coin BNB has attained #3 spot (+28% YTD) long ago, surpassing the Ripple, which is now only #4 with gain of 20% YTD. Cardano closes the ranking at #5 with the largest gain of 47% YTD. END_OF_DOCUMENT_TOKEN_TO_BE_REPLACED

Last September, the Congressional Research Service published an "In Focus" report. They had already attempted to address speculation about the dollar's dominance in the face of global economic and geopolitical changes at the time.

Three major threats were addressed in that document.

China and its currency have risen to sixth place, accounting for 1.66% of global payments.

"To date, there is no evidence of a shift away from the US dollar as the dominant reserve currency," the study concluded.

Back in October, I shared my most recent update for the dollar index, as it hit the first target with a fresh outlook.

At the time, I proposed two paths for the dollar: a continuation to the next target of $121 on an aggressively hawkish Fed, or a consolidation before resuming to the upside. The majority of readers supported both paths, with the consolidation option coming out on top.

The question of the dollar's dominance is resurfacing these days, as its value has plummeted dramatically. It is too early to tell whether this is a consolidation or a global reversal.

One thing is certain: the path of unending growth has been abandoned.

In my charts, I see a clash of perspectives. The technical chart is about to give a strong bearish signal. The chart comparing fundamental factors, on the other hand, supports the king currency's continued strength.

Let me show you each of them one by one, beginning with the emerging bearish alert. END_OF_DOCUMENT_TOKEN_TO_BE_REPLACED

Amid macroeconomic and geopolitical headwinds, energy stocks have fared better than the broader market this year.

The war between Ukraine and Russia had led to a significant rise in prices of crude oil and natural gas as the world feared a shortage of these essential commodities with widespread sanctions on Russia, a major oil and gas producer. This led to investors’ focus shifting to energy stocks.

Oil and gas major TotalEnergies SE (TTE) has gained 29.8% in price year-to-date and 27% over the past year to close the last trading session at $63.13. Courbevoie, a France-based company, announced a solid third-quarter performance.

TTE’s CEO Patrick Pouyanné said, “In a context marked by an average Brent price of $100/b and an increase in gas prices exacerbated by Russia’s military aggression in Ukraine, TotalEnergies leveraged its integrated model, particularly LNG, to generate results in line with previous quarters.”

TTE announced that it had obtained a 9.375% participating interest in the 16 million ton per annum (Mtpa) North Field South (NFS) LNG project in Qatar to fuel its growth further.

After combining its participating interest in North Field East (NFE) with NFS, TTE will add LNG production of 3.5 Mtpa to its worldwide LNG portfolio by 2028, which is in line with its goal to increase natural gas in its sales mix to 50% by 2030.

During the previous quarter, the company also announced that production had started at the Ikike field in Nigeria. The project is expected to deliver peak production of 50,000 barrels of oil equivalent per day by the end of this year.

TTE also launched the Begonia project in Angola and the Fenix project in Argentina, which is expected to produce 10 million cubic meters per day of natural gas after the expected operations in early 2025.

Moreover, the company’s partner Eni announced in August that it had made a significant gas discovery in the Cronos-1 well in Cyprus, with initial estimates indicating 2.5 TCF of gas. END_OF_DOCUMENT_TOKEN_TO_BE_REPLACED