At the beginning of the second quarter, I put out a special report on gold and highlighted how the World Cup portfolio has had an 80% success record in that market during that time frame. I am happy to report that the second quarter of 2014 kept that winning streak alive with the recent move in gold and added to the profitability of the World Cup portfolio.

Well traders, as we rapidly approach the end of June and the beginning of the third quarter it is time to find out which market is going to be hot. Throughout the history of the World Cup portfolio (since 2007), the third quarter tends to be the killer quarter for soybeans.

In the past, using the strategy from the World Cup portfolio, soybeans has seen an 85% success rate in the third quarter. Now, that's not to say that this coming quarter is going to be 85% correct, but certainly the odds would favor that.

You can have access to the signals for the World Cup portfolio by joining MarketClub right here.

Here are the trading results for soybeans in the third quarter of every year since 2007, using the signals from the World Cup model portfolio strategy.

As you can see from the numbers, 2008 was an outstanding year. Besides 2009 and 2013, most of the other years produced profits that were quite exceptional. As late as 2012, you would have produced a healthy return on your initial margin. END_OF_DOCUMENT_TOKEN_TO_BE_REPLACED

Each Week Longleaftrading.com will be providing us a chart of the week as analyzed by a member of their team. We hope that you enjoy and learn from this new feature.

This week's focus shifts to the grain markets and looming USDA reports that will be released during today's trading session. The general sense is that Soybean planted acreage could be higher than expectations. The Department of Agriculture is expected to report a significant shift in planted acreage to Soybeans from Corn because of favorable pricing. In the past week, this sentiment seemed to be continually priced into the market. Any indication of less than expected acreage could add fire to an already bullish market and cause May Soybeans to make a move toward $15. 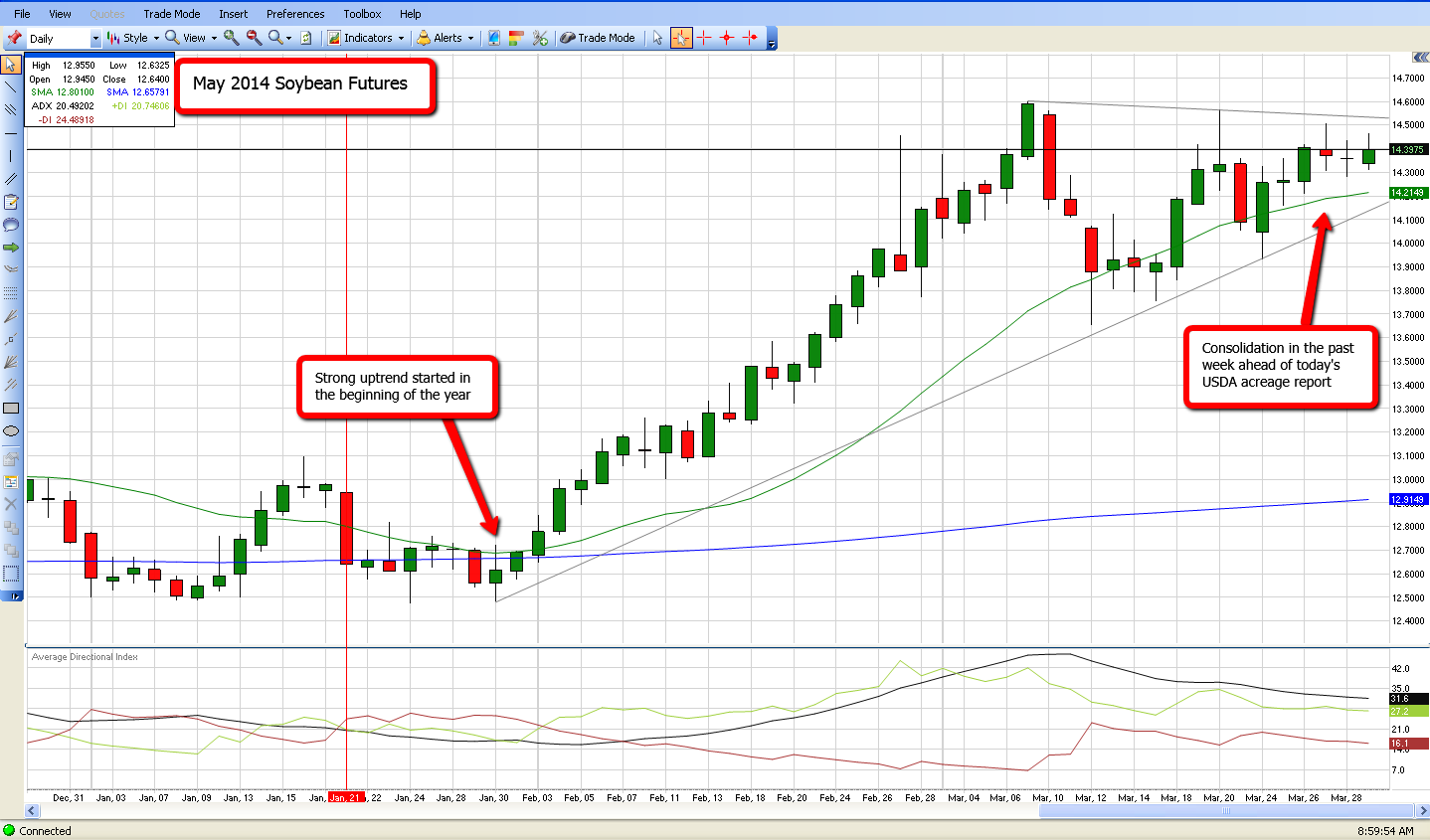 As we turn to the May Soybean chart, we are able to clearly identify a very strong up-trend in the market since the start of the new year. After posting the high print of $14.60 on March 7, the market has consolidated as traders positioned themselves for today’s March 31st USDA report. With so much sentiment geared towards a large expected acreage in Soybeans, an underwhelming number is very possible. In this case, I would look to take a buying position in the Soybean market and look for $15/bushel in the near future. END_OF_DOCUMENT_TOKEN_TO_BE_REPLACED

It was a gut wrenching week for those who stayed long practically anything outside of the US Dollar or the Soybeans last week. Most commodity prices saw their fair share of selling mid-week after it was rumored that a large commodity fund was taking gains in a few markets to defend another large position that they found themselves on the wrong side of. While the name of the fund or the positions are still unknown, I can only guess the fund was taking gains in long positions in the Crude Oil to defend long positions in the Metals. On Wednesday, the Crude Oil Futures took a bath early in the session and selling pressure even carried over into the Thursdays trade before consolidating on Friday. Other commodities were pressured throughout the week as the US Dollar rallied ahead of the release of last months FOMC Minutes. There was nothing particularly shocking about the report as traders expected to hear that FED officials would still be at odds regarding the duration of Quantitative Easing. On top of this release, the market also had to deal with politicians in Washington, who began their media smearing of one another regarding the upcoming Sequester, which must be decided by March 1st. END_OF_DOCUMENT_TOKEN_TO_BE_REPLACED

WHY COMMODITY MARKETS ARE SO IMPORTANT
The commodity markets are incredibly important as they really drive commerce and the economy. Think of the role that commodities play in our everyday lives, they affect the cost of what we eat, what we buy and how we drive to and from work. In today's show, we will be looking at the major trends in all of the major commodity markets.

“As we express our gratitude, we must never forget that the highest appreciation is not to utter words, but to live by them. ”
John F. Kennedy (1917-1963)
35th US President

Those are words we live by every day here at MarketClub and our parent company, INO.com. Our goal and mission is to help and assist our members get the very most out of MarketClub and all of the services we offer.

With thousands of members around the world in over 100 countries, we take our mission very seriously. Our goal is to provide you with the tools that will help you achieve the kind of results you may have only dreamed of.

It is with that in mind that I invite you to watch this four minute video on the World Cup Portfolio.

Since late 2007, we have been religiously tracking a portfolio that we designed to take advantage of the ever changing world we live in. This portfolio contains six core elements, all of which have performed extremely well in both Republican and Democratic administrations.