If the Cambridge Analytica fiasco, one mishandled public relations incident after another and numerous earnings calls that went down as some of the biggest blunders in history wasn’t enough, now enter an international advertising boycott. Here we go again, Facebook (FB) investors have been through a lot over the past two years. Now another challenge is confronting the company via an advertising boycott that’s growing into the hundreds of multinational companies. This challenge may weigh heavier on the company since this boycott will directly impact revenue as expenses swell. The magnitude of this boycott will inevitably influence the stock price as this movement grows in numbers and duration. If Facebook can appease advertisers in a timely fashion, then this may be a temporary challenge. However, as advertising spending is abandoned indefinitely due to this boycott and overall spend slows due to COVID-19, this culmination could cast uncertainty around its stock valuation. Thus far, over 400-plus brands have fled Facebook.

Boycott Growing In Numbers and Duration

International household names such as Adidas, Best Buy (BBY), Clorox (CLX), Ford (F), HP (HPQ), Starbucks (SBUX), Coca-Cola (KO), and Verizon (VZ) have joined the advertising boycott across Facebook and its platforms. Companies are jumping on the bandwagon daily, including a significant recent addition of Microsoft (MSFT). Total advertisers that have abandoned Facebook and its Instagram properties have now ballooned to over 400 organizations. With an undefined timeframe of how long these advertisers will stay away from Facebook may dampen revenue expectations. Another complexity that may arise is the ability to appease the collective group of advertisers in order to bring all of these companies back to the platform. END_OF_DOCUMENT_TOKEN_TO_BE_REPLACED

Facebook (FB) tanked after announcing its recent quarterly earnings despite beating on both the top and bottom-line numbers. In addition to the strong revenue and income figures, user growth across its platform grew by a robust clip and the company authorized an additional $10 billion for its share repurchase program. The culprit was a sharp rise in spending and expenses to contend with a slew of regulatory, user and legal battles the company is waging on the privacy front. This minor sell-off provides investors with a buying opportunity in top tier large-cap company that continues to grow double digits with a long runway for further growth and monetization of its platforms. 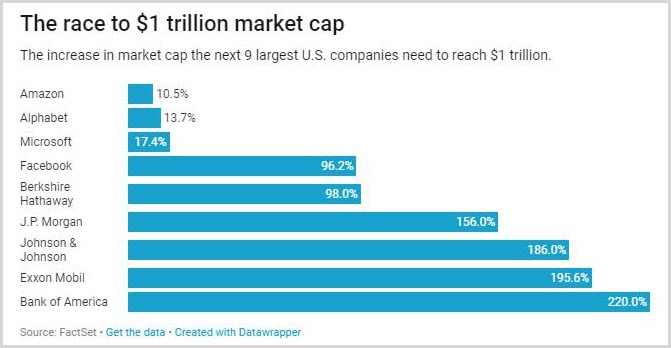 Facebook Inc. (FB) is making a bold move that stands to have vast implications across its business model and its user base via launching its cryptocurrency called Libra. Cryptocurrencies are still in a nascent stage in terms of adoption, acceptance, application, and full understanding of these virtual coins. The cryptocurrency market thus far has been speculative, volatile, and met with skepticism from users and governments alike. Despite the tumultuous albeit short history of cryptocurrencies, these alternative forms of currency have vast implications. These implications include potential disruption of central banks, destabilizing government-backed currencies, reshaping the financial transactions space (i.e., banks and credit cards) while displacing central database infrastructures via blockchain (i.e., banks, clearinghouses, credit card networks). Facebook’s Libra stands to address the unbanked (those without traditional bank accounts) segment of its user base in a major way. The President and Jerome Powell, along with many others in government have either voiced concerns or publically made clear that they’re not embracing this move by Facebook. Government officials are concerned about appropriate regulatory framework being in place considering the company’s past privacy scandals. Nonetheless, will this cryptocurrency bode well for Facebook moving forward?

Libra will be dissimilar from Bitcoin in its underpinning blockchain technology and mining. Libra will not run on a decentralized disturbed blockchain ledger, and no mining of any additional coins will occur. The blockchain is permissioned and will be managed by the Libra Association, which is a membership organization that consists of 27 payment, technology, telecommunication, online marketplace, venture capital, and non-profits. Libra is planned to be launched sometime next year 2020. Libra will allegedly be backed by financial assets such as a basket of currencies and US Treasuries to circumvent volatility. Unlike Bitcoin, which isn’t backed by anything and can highly volatile, Libra’s value should be anchored and less variable. Each member of the Libra Association will add $10 million, so the cryptocurrency has full asset backing. The supply of Libra will expand and contract based on demand; if demand is high, then the association will purchase more of the underlying assets and create new Libra. If users want to cash out of the cryptocurrency, the association will pay them and destroy the equivalent amount of Libra. END_OF_DOCUMENT_TOKEN_TO_BE_REPLACED