Back in 1925 President Calvin Coolidge famously said, “The business of America is business.” Apparently, this is still true even if the current administration more closely resembles the Five Families rather than the worthy successors to Silent Cal.

Even as President Trump’s new communications director is “front-stabbing” his White House colleagues and Republicans in Congress can’t get anything done about health insurance reform except make themselves look foolish – and without any help from the Democrats – the economy seems to roll on regardless. Last week the Commerce Department reported that the American economy grew at an annual rate of 2.6% in the second quarter, the first full quarter of Donald Trump’s presidency. That was up sharply from the first quarter’s downwardly revised 1.2% rate and the second strongest rate in the past eight quarters.

That managed to happen thanks to some extent from the hope and anticipation of major health insurance and tax reform, not their actual enactment. Imagine what might happen if our lawmakers actually do what they’re supposed to be doing and those things become reality?

A more pertinent question for this column is: Is that growth rate strong enough to get the Federal Reserve back to raising interest rates again and start its “balance sheet normalization program,” i.e., trimming its $4.5 trillion securities portfolio? END_OF_DOCUMENT_TOKEN_TO_BE_REPLACED

2017 is kicking off to be an eventful year in the healthcare space. Regeneron was handed a devastating blow in federal court in a lawsuit filed by Amgen surrounding its cholesterol-lowering drug Praluent. Amgen claimed that Regeneron’s Praluent infringed on Amgen’s patents and competing drug Repatha in a long-standing patent lawsuit. Amgen previously won a trial in which Regeneron was shown to have infringed on two patents covering a class of cholesterol-lowering drugs. The most recent ruling stipulates that Regeneron must stop selling Praluent in the U.S. altogether due to “irreparable harm” to Amgen. It’s extremely rare to see a ruling in which a drug is ordered to be removed from the market as opposed to a financial penalty or royalties. Monetary implications at the moment are minor as Praluent and Repatha have had minimal sales through the first 9 months of 2016 of $75 million and $83 million, respectively. Despite these numbers, if positive data comes to fruition that extends a clinical benefit to more patients in lowering rates of heart attacks, strokes and death then Amgen’s drug could gain broader insurance coverage and ultimately sell $2-$4 billion on an annual basis worldwide. Amgen shares popped 5% on the news while Regeneron shares sank 6% albeit shares were halted once the ruling came down.

END_OF_DOCUMENT_TOKEN_TO_BE_REPLACED

I have posted that CVS presented a compelling investment opportunity in the healthcare space. This premise was rooted in the fact that CVS has been highly acquisitive, continuous robust growth rate, growing its dividends over time and has an aggressive share buyback program. CVS recently reported robust earnings and continued to drive and position itself for long-term success. With its recent acquisitions and partnerships, specifically, the acquisition Target’s pharmacies and Omnicare will significantly expand its footprint and ability to dispense prescriptions to the general public and in assisted living and long-term care facilities that serve the senior patient population. As the United States continues to absorb an aging population alongside growing overall healthcare costs, more specifically prescription drug costs, CVS looks poised to benefit and continue to outperform the broader market. The most recent earnings report, rise in its 2016 outlook and a 21% boost in its dividend payout underscores this premise. I content that CVS will continue to deliver continued growth and positioning for long-term success. END_OF_DOCUMENT_TOKEN_TO_BE_REPLACED

I hope I'm not dating myself too much, but I remember when the neighborhood chain drugstore was almost a one-stop shop for human needs.

For example, you dropped off your film to get developed. You could get the ointment for that embarrassing itch. You could even get a BLT and some fries. (Not necessarily in that order.)

The BLTs and fries are long gone, but the chain drugstore on the neighborhood corner has continued to evolve and embed itself into our daily lives. And it will continue to do so in an even bigger way going forward.

By far, the two biggest players in the drugstore space are Walgreen Co. (NYSE: WAG) and CVS Caremark (NYSE: CVS). If two-thirds of the Earth is covered by water, the remaining third is covered by these two companies. But which stock makes the most sense for your portfolio? END_OF_DOCUMENT_TOKEN_TO_BE_REPLACED 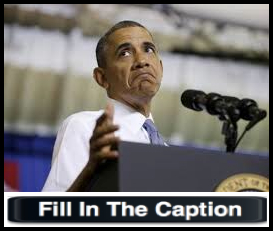 Leave a comment on what you think would be the “perfect caption” for this photograph of President Obama and Obamacare and what he is thinking. Here’s our caption:

We look forward to reading all of the captions.