Here are the monthly views of the basket cases we call major currencies.

Uncle Buck and his reserve status were leveraged to the hilt by "The Hero" and now his successor is trying to gently talk the Fed out of its policy stance over time.  In other words, tightening is going to come one way or another and Janet Yellen is trying to go the orderly route.  When this process becomes disorderly, the USD is likely to benefit from the liquidations elsewhere in the asset world.

Technically, USD is in a long basing pattern.  There are those who think it is basing before a renewed decline, reading a Symmetrical Triangle (continuation) pattern into poor old Unc.  I think the odds are it is bottoming over the post-2008 years when inflation – try as they might to have promoted it – simply has not taken root.  Leaning bullish, watch support and resistance.

Long ago we projected a rally in Uncle Buck’s chief competitor, the Euro.  This was due to a bottoming pattern (formed on shorter term charts) and unsustainable negative hype about the Euro crisis.  The target was around 140 +/-, which is the top of the post-2008 downtrend channel.  Euro remains in a big picture downtrend and if global asset markets start to come unwound in the coming months, it is not Euros people are going to run to, I can tell you that.  Bearish below the upper trend line. END_OF_DOCUMENT_TOKEN_TO_BE_REPLACED 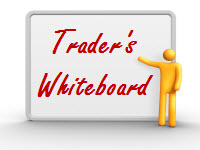 Do you know how to tell if a market has topped out? Has it hit the bottom? If you know how to look at your chart and pick out a flag or symmetrical triangle pattern, you may have your answer and be able to react accordingly.

In the seventh Trader’s Whiteboard Lesson, Adam illustrates two key continuation patterns that will tell you if the market has had a little hiccup or if it will be staying down for quite a while.

Watch today and add this tool to your “trading toolbox”.