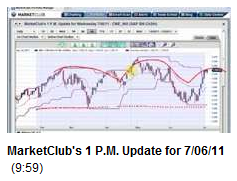 Hello traders everywhere.  Adam Hewison here, co-founder of MarketClub, with your 1 p.m. market update for Wednesday the 6th of July.

The stars of the show today have to be the metal markets. Gold has rallied $50 from the low that we witnessed last week and is up over 1% today.  Silver is even better with a rally of 1.82%. It seems as though the global anxiety factor is creeping back into the markets and people are getting more and more distrustful of what's going on in the world.

The question is, can the Democrats and Republicans stop their bickering long enough and come to an agreement on the debt ceiling? Eventually, I'm sure there will be some sort of compromise that will probably make both the liberals and the conservatives mad. It's really time to stop all this bickering and start making some hard and difficult choices. I'm not sure the current set of politicians have the chutzpah to do this.

The banks stocks took a little hit today and it's clear that these stocks are not out of the woods yet.

Let's take a look at how things are shaping up today and go to the charts to see how we can protect and make your money grow. Click here to watch the video.

S&P 500: +100. The $1,340 level is proving to be the decisive place for the S&P 500. We're now at the top of the Donchian channel and the market is very overbought. We expect to see more two-way action in the days ahead and eventually this market to roll over and possibly form the right shoulder of the head and shoulders formation. Although, trade triangles remain in a positive mode and that should not be ignored. Look for support to come into this market around the $1,300 level.

Silver: +75. Silver will put in another positive performance today moving up over the $36 an ounce level. This market is fast approaching the top of the Donchian trading channel and also moving into overbought territory. Our trade triangle technology is mixed at the moment with the longer-term trend being positive and the intermediate term trend being negative. Intermediate term traders should be on the sidelines in this market. We still believe that silver is building a major energy base to go higher.

Gold: +75. Gold has rallied over $50 an ounce in the space of four trading days and is acting like it is making a major energy base to push higher later in the quarter. Resistance starts around the $1,540 range. Long-term trends with the trade triangles are positive while intermediate term trends are neutral.

Crude Oil: -55. It looks as though the crude oil market has reached a level of equilibrium with the $98 a barrel price acting as some short term resistance point. We are still looking for this market to potentially challenge the triple digits over $100 a barrel. The market is however overbought so we may see some more two-way action. We are still watching the bullish engulfing line from last week and a higher close this week confirms that a bottom is in place.

The Dollar Index: -65. The market bounce we described in yesterday's 1 PM update for the dollar index took place with the dollar over the $75 level for the first time in six days. This market remains trapped in a broad trading range, however the longer term trend for the dollar index is still negative according to our trade triangle technology. Resistance remains between $75 and $76.

Thomson Reuters/Jefferies CRB Commodity Index: -65. This index is back to the midpoint of the Donchian trade channel and has just moved into an overbought situation. We expect that we will see more backing and filling in this market before it starts to move higher. If crude oil goes to $100 a barrel, then we are probably  looking at this index around $350. Look for support at $335 and again at $330.

One thought on “Metal Markets steal the spotlight”