It was a gut wrenching week for those who stayed long practically anything outside of the US Dollar or the Soybeans last week. Most commodity prices saw their fair share of selling mid-week after it was rumored that a large commodity fund was taking gains in a few markets to defend another large position that they found themselves on the wrong side of. While the name of the fund or the positions are still unknown, I can only guess the fund was taking gains in long positions in the Crude Oil to defend long positions in the Metals. On Wednesday, the Crude Oil Futures took a bath early in the session and selling pressure even carried over into the Thursdays trade before consolidating on Friday. Other commodities were pressured throughout the week as the US Dollar rallied ahead of the release of last months FOMC Minutes. There was nothing particularly shocking about the report as traders expected to hear that FED officials would still be at odds regarding the duration of Quantitative Easing. On top of this release, the market also had to deal with politicians in Washington, who began their media smearing of one another regarding the upcoming Sequester, which must be decided by March 1st.

Now flash forward to last night, when suddenly all of last week’s data and concerns have seemingly vanished from the equation. Apparently, markets are pricing in a few things that should restore faith to the long side of the markets and will have shorts on the defensive. Thus far, the story is that there is expectation that the upcoming election in Italy will be favorable for the Euro as it rallied almost 200 points from last week’s low. This bump up put pressure on the Dollar and aided commodities in correcting a piece of last week’s fall.

While Italy steals the show in the early going, the United States will take the reins following the election outcome. Congress will resume the sparring after a week-long recess and we should all expect a continuation of name calling and finger pointing as politicians drag out their decision on spending cuts until the eleventh hour on Friday. Ben Bernanke will provide testimony on economic policy on Tuesday to the Senate Bank Committee and on Wednesday to the House Financial Services Committee. I do not expect any major surprises from either of these testimonies, but it is certainly worth noting. There are also a string of reports before Friday for the US to report, including Q4 GDP, Initial Claims, and Consumer Confidence.

Looking back at the Daily Chart of Gold from last week, it would have been a great short in the early part of the week, but those who did have a big decision to make now. The Futures are correcting a bit and are trying to inch their way back into the range. Last week’s low price has me a bit puzzled, but I think a failure to rally back through $1600 would be telling. With all of the important data to get through this week, including the big decision in Washington, I feel it would be best to look at most markets, including the Gold with shorter term trading in mind. 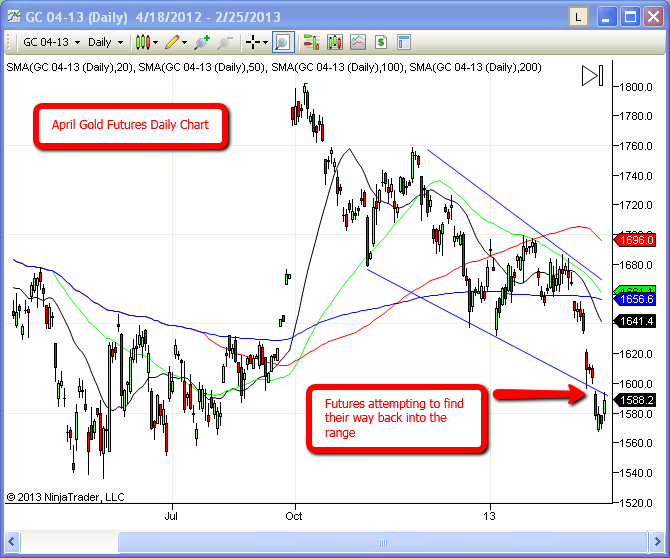 If you would like to speak with me directly about shorter term idea in the Gold, please feel free to call or email me directly. You can reach me at (888) 272-6926 or by email at [email protected].

2 thoughts on “Gold Chart of The Week”