Hello traders everywhere! Adam Hewison here, President of INO.com and co-creator of MarketClub, with your video update for Monday, the 27th of January.

I am going to be looking at the stock of Apple Inc. (NASDAQ:AAPL), who reports earnings after the bell today. The psychological stakes could not be any higher for Apple, which in many ways, still mourns the loss of Steve Jobs' visionary qualities. The big question on investors' minds these days, is Apple still a momentum stock or has it become a dividend paying stock? 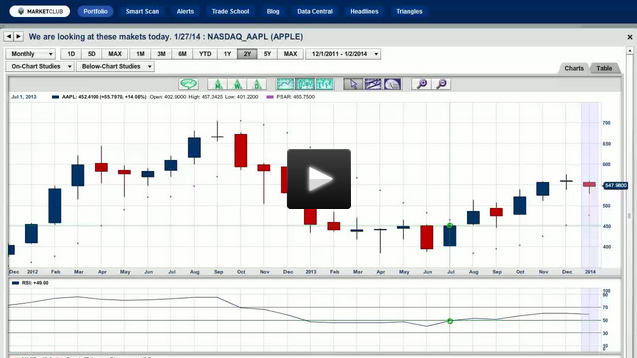 This is a big challenge for Apple because one of its core markets is young people and one thing Apple cannot afford to do is lose its cool factor with this audience. It may have already lost its cool factor with the younger generation, as Android is certainly showing up more and more in the hands and minds of teenagers.

Looking back, it is amazing to think of all the disruptive moves that Apple has made that changed our world. Just think of the iPod, iPhone, and of course the iPad, all of which have changed the way we interact with one another and access information on the go. One of the questions I have is this, does Apple’s R&D have something up is sleeve that is going to be another new disruptive game changer?

I think it's going to be extremely difficult for Apple or any other company to do something that revolutionizes another industry. There's been talk of Apple doing TV sets and wearable technology. But so far, it has only been talk. Both of these technologies do not have the same type of margins that Apple is used to receiving. At this point in time we can only wait and see if Apple still has the power to change the world and keep its cool factor.

How Should You Be Positioned Before The Apple Earnings?

If you are long-term trader following the Trade Triangles, you should be looking at the monthly Trade Triangle that remains positive for Apple Inc. (NASDAQ:AAPL), indicating a long position going into the earnings.

If you are an intermediate-term trader following the Trade Triangles, you should now be on the sidelines in Apple, based on the weekly Trade Triangle.

Expectations are high that Apple is going to produce some knockout profits this earnings quarter. How many iPhones and iPads did Apple sell and did their profit margins shrink? Apple will only move to the upside if it comes in with an EPS way above $14 and revenue above $38 billion.

One the of the dominant technical features for Apple is the 9-month trend line that begins in mid-June of last year. Should this level be broken on the downside, it could indicate a move back to the $500 range or about 10% from current levels. On the upside, Apple needs to move over the $560 level to regain its upward momentum and begin to accelerate towards $640.

One thought on “Apple Inc. (NASDAQ:AAPL) Reports Earnings After The Bell”